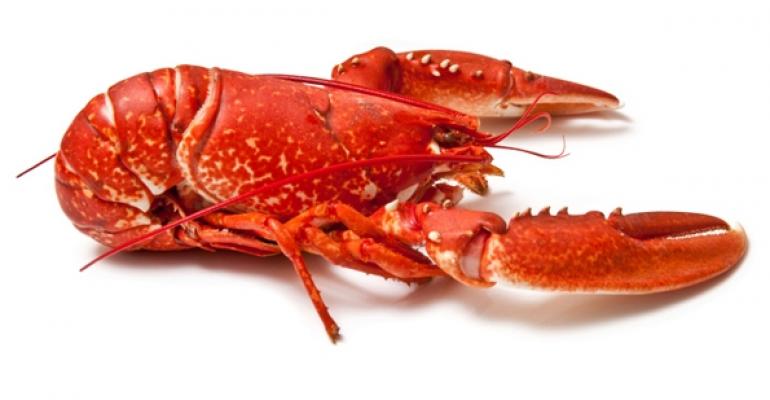 The current price of American lobster in Boston is more than 30 percent higher than it was at this time last year.

Late winter storms and other factors have driven lobster prices so high that restaurants have started taking them off their menus.

The price of Homarus americanus, or American lobster, the species found mainly in the North Atlantic between New Jersey and Labrador, usually increases at this time of year as reserves from the fall season are depleted by sales during New Year’s Eve and Valentine’s Day. But the current price of American lobster in Boston, the international distribution center for the species, is more than 30 percent higher than it was at this time last year, according to Bill Adler, executive director of the Massachusetts Lobsterman’s Association, a trade group.

Adler said Massachusetts distributors are currently paying between $9.50 and $10.50 per pound for lobsters from Canada, where the majority of lobsters available at this time of year are kept in coastal pounds. Last year at this time, the price was between $6.50 and $7.25 per pound. “I’ve never seen it this high,” he said.

“It’s just a short-term supply situation,” said Geoff Irvine, executive director of The Lobster Council of Canada, based in Halifax, Nova Scotia. “We’ve had such mild winters [recently] that fisherman have been out in March, and they really haven’t been able to this year.”

As a result, distributors expecting more fresh-caught lobsters haven’t been able to get them, he said. “We had a real winter this year and people expected more fresh caught [lobsters] today than they’re getting."

Although local lobsters are usually priced a bit lower, winter storms over the past few weeks have mostly kept domestic boats in docks as well. “Because of bad weather, I’ve heard they’ve even had trouble getting to the pounds,” said Michael Leviton, chef-owner of Lumière in Newton, Mass., and Area Four in Cambridge, Mass., as well as chairman of Chefs Collaborative, a national conservation organization.

Lobster is a customary celebratory dish for Easter in parts of Europe, but Adler wondered whether they’d buy the delicacy at the price being asked for them. “I don’t even know if there’s going to be a market there [in Europe], because if this is the cost in Boston, who knows what it’s going to be there,” he said.

Waiting out the price hike

Adler noted that demand for lobster was drying up across the country even though some people buy it regardless of the cost. “Because of this high price, it’s killed off the other demand,” he said.

Adrian Hoffman, vice president of culinary development for Lark Creek Restaurant Group, which operates 11 restaurants in the San Francisco Bay Area, said in a Twitter conversation that he has removed lobster from his menus until the price comes down.

Leviton’s advice for handling the high prices: Wait a few weeks and serve other seafood in the meantime. “Instead of always wanting the same things when we want them, eat within the season,” he suggested, noting that the Maine scallop season has started. He added that monkfish has recently been taken off the Seafood Watch red list, as the fishery has recovered, as has Maryland striped bass.

Leviton also noted that the tastiest lobsters, in his opinion, are “hard shedders,” or lobsters that have completed their molting and have started to fill their newly hardened shells. The season for those is late summer, he said.

Adler agreed that prices are likely to start coming down in a few weeks as operators of lobster pounds look to clear their inventory before the more desirable freshly caught lobsters become available. He explained that, although lobster meat from pounds is perfectly fine, the lobsters themselves tend not to be as attractive as freshly caught ones. “They just don’t have the shine of fresh-caught lobster,” he said.

Then prices will likely be unstable for a few weeks as distributors wait for them to bottom out before buying them. “This is the way it’s usually run,” Adler said.

The current price hike comes after a summer of record-low prices for soft-shell American lobster — a type of lobster that is typically eaten locally or processed into frozen products since it can't be shipped live due to recent molting. Prices had fallen to $2.50 per pound or lower for the lobster, well below the break-even price of around $4 per pound, Adler said. He attributed the price drop to unusually warm waters in late spring last year that resulted in lobsters coming to shore before seasonal processors were up and running.

Correction: March 26, 2013 This story has been updated to correct lobster prices at this time last year.