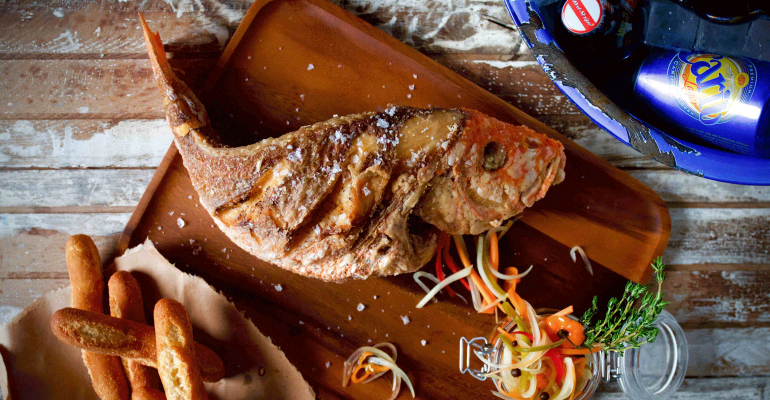 Inspired by traditional Peruvian, Jamaican and Asian dishes, or simply because they are fans of how frying locks in the juicy and intense flavors of bone-in cooking, chefs across the country are reeling in diners with whole, fried fish.

“By cooking the whole fish, more flavor from the bone seeps into the flesh and the result is really tasty,” said Andre Fowles, chef de cuisine at Miss Lily’s, a Jamaican-style diner, rum bar and jerk shack with two locations in New York City and one in Dubai.

To make Hellshire Beach Style Porgy, served only at Miss Lily’s East Village location in New York, Fowles seasons the fish with salt and pepper, dusts it with flour and fries it to achieve “a crisp exterior texture and delicate meat inside.”

Fowles took inspiration from Hellshire Beach in Jamaica, where he said local fisherman bring in daily catches from the sea and fry them on charcoal fires on the beach. In his version, the whole fried porgy is served in a traditional Jamaican-style escovitch —peppers and onions in a spicy vinegar marinade — with a side of fried sweet dough cakes called festivals. The fish is bent before cooking to give it the dramatic appearance of swimming on the plate when served.

“At Hellshire Beach, the fish are always fried whole, so we maintain that integrity,” Fowles said.

On the menu since last summer, Fowles said the fish has been popular among Miss Lily’s diverse guests, including West Indian expatriates and locals alike. Snapper gets a fried Thai treatment at Oyster Bah in Chicago.

Inspired by Thai cuisine — one of his favorites — Pete Balodimas, executive chef of Oyster Bah in Chicago, is serving a whole, fried red snapper with Thai chile sauces. To yield a crispy but delicate crust that contrasts with the moist, flaky meat, Balodimas fries on-the-bone snapper in a blend of cornstarch and rice flour.

“Cooking the fish on the bone yields a tender and juicy fish that is more intensely flavored,” Balodimas said. “And presentation played a factor in serving it whole.”

On the menu since the restaurant opened in late 2015, the crispy snapper quickly became a signature dish.

At Tanta in Chicago, a Peruvian restaurant from chef Gastón Acurio, executive chef Jesus Delgado offers a Pescado Frito that highlights the East Asian influences prevalent in Peruvian cuisine. The market-fresh fish is fried whole, and then filleted and served with the head and tail intact to create a show-stopping presentation. It’s served with sautéed bok choy, fried rice and a spicy Japanese-Peruvian “Nikkei” sauce.

“Serving the whole fish allows people the chance of exploring the different flavors of the whole fish,” Delgado said. “Normally the fish is softer in texture, and by frying it you are able to keep the juicy inside and crispy outside.”

On the menu since the beginning, Delgado said the dish “sells really well with larger groups and guests looking for a different preparation of fish.” Lobster goes deep, as in deep fried, at LSXO in Huntington Beach, Calif.

Other chefs are giving shellfish the whole, fried treatment.

Originally introduced in February as a special, Drew decided to keep the item on the menu in the small plates section as an easily shared seafood option. He said diners have responded well to it, especially when servers explain that prawn heads carry so much flavor.

“The best way to capture the pure flavor of lobster is to cook it whole in its shell,” Vuong said. “No moisture or flavor escapes the lobster while it's cooking, and the overall taste is intensified.”