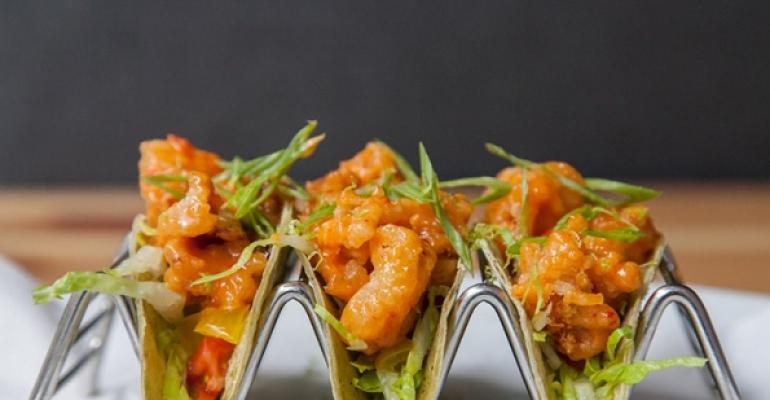 Lobster has become ubiquitous on restaurant menus in recent years, showing up everywhere from fine dining to food trucks, and even at McDonald’s.

While production of Maine lobster has risen this year, so too has demand, resulting in higher prices. To keep this summer must-have on the menu at a reasonable cost, some chefs are serving creative dishes that use a little less lobster.

“I usually don’t do a whole lobster dish,” said Mike Price, executive chef and owner of The Clam in New York City. “It would cost well into the 40s for a single person. I try to get creative with it in order to make profit as high as possible.”

At The Clam, Price serves innovative dishes made with lobster combined with lower-cost ingredients to achieve what he calls a “happy medium.” Among current offerings are Lobster Louie, a half lobster chilled and topped with spicy mayonnaise, tomato and chopped egg; the Lobster Fried Clam Slider, made by piling lobster and fried clams onto a buttered and toasted brioche roll; and Lobster Raviolo, one big raviolo stuffed with a blend of chopped lobster, whipped ricotta and leeks.

“Lobster is a draw,” said Price. “People expect it, and you have to live up to that expectation.”

“This year we paid high prices [for lobster], but not compared to other years with exorbitant prices,” said Gilbert. “It you have clientele looking for that product, you have to be more creative with it.”

At Requin in Fairfax, Va., chef and partner Jennifer Carroll recently added Lobster Avocado Toast to her menu. The cold summer dish is made with lobster salad dressed with lemon, herbs, oil and honey atop a slice of toasted brioche spread with creamy avocado, garnished with pickled Fresno peppers and a French breakfast radish.

“I have always had lobster on my menus throughout the course of the year,” said Carroll. “Right now, because of the higher prices, I have to think harder about the other ingredients that are being used in the dish in order for it not just to be delicious, but financially wise.”

For the last few years, Pedro Avila, chef at David Burke Prime Steakhouse at Foxwoods Resort in Mashantucket, Conn., has been running a popular Lobster Mondays special featuring a three-course lobster menu for $39 a person. He, too, has gotten creative with what he offers. Among the several appetizers and entrées to choose from on Mondays are a Lobster Taco Trio, with lobster salad, fennel slaw and avocado mousse in housemade hard-shell tacos; and Lobster Kung Pao Style, with cilantro, lime, peanuts, drawn butter and rice.

With lobster dishes among the guest favorites at The Signature Room in Chicago, executive chef Cardel Reid has no plans to remove them or alter them based on cost variations. Lobster dishes currently on his menu include a lobster salad that is Reid’s take on the classic Cobb salad, plus lobster; and a corn and lobster fritter served with watercress salad, lemon vinaigrette and basil aïoli.

Meanwhile, the spike in Maine lobster prices has prompted Victor Albisu, chef and owner of Del Campo in Washington, D.C., to switch to Brazilian spiny lobster for the two lobster dishes on his menu, a warm lobster salad arepa with charred corn and smoked trout caviar, and a “grilled seafood smoke box.”