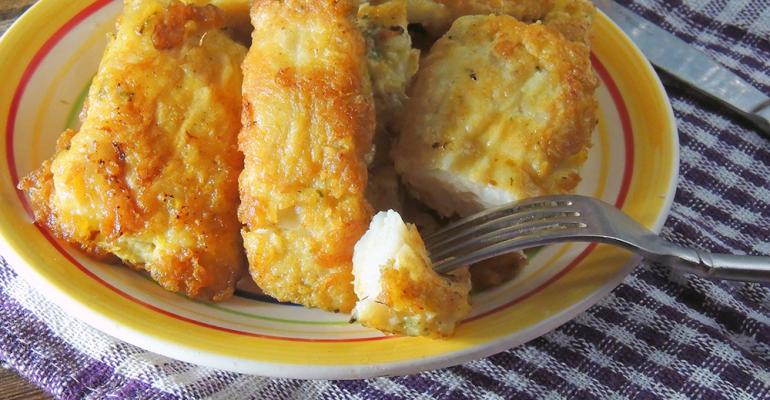 Cooking food in hot fat may not be the healthiest preparation, but it is among the most popular methods restaurants use when making seafood.

According to Datassential’s most recent Seafood Keynote Report, 33 percent of restaurants that offer seafood entrées serve fried ones. Only grilling is more popular than frying, and when it comes to shellfish in particular, fried is the No. 1 preparation.

“My number one tip for frying fish is corn starch as a base and letting it sit and soak,” said Darren Hendry, chef de cuisine of Dyllan's Raw Bar Grill in Washington, D.C.

For his fried grouper tacos, Hendry seasons black grouper with black pepper and salt and dusts it in cornstarch, then sets it aside for three to four minutes to let the cornstarch and fish get tacky to the touch. Then, he dips the fish in a batter out of fresh yeast, flour, sugar, salt and beer and fries it at 350 degrees Fahrenheit for about four to five minutes. 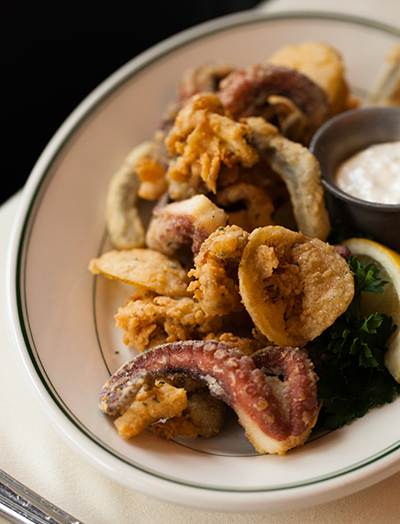 “The lactic acid in the milk tenderizes the muscle fibers,” Diglia said.

“When working with any seafood, it's a must to pat dry the fish or shrimp before submerging in batter,” she said. “If fish or shrimp is wet the beer batter will not stick properly.”

“The salt pulls more moisture from the seafood, creating a wet barrier, which does not allow the dredge or batter to adhere to the seafood,” she said.

“The secret [to fried seafood] is a great batter,” said chef Jeff Vucko of Travelle at The Langham in Chicago.

“Make sure it is thick, but airy,” he said. Finely ground flours such as cornstarch, rice flour and potato starch can help achieve that. Self-rising flour or a pinch of baking soda can contribute to the airiness, as can “a bubbly liquid like soda water or beer,” he said.

“I use rice flour for frying due to the product becoming crispy, tender and weightless in comparison to the bread-like, heavy, greasy batter of wheat flour,” Bellicourt said. 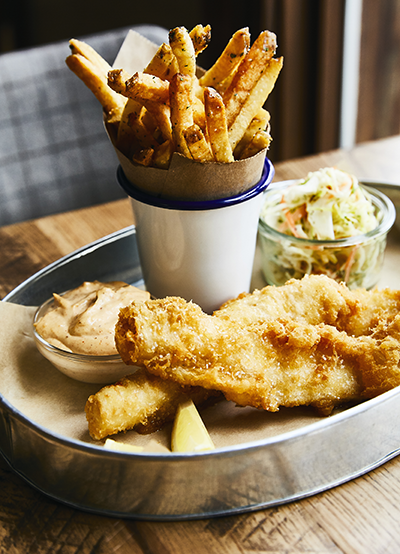 Most recently, Bellicourt has been dredging whole red snapper in rice flour and then frying it for seven to nine minutes in canola oil for a flaky and crispy fish.

At Brim House and The Heights, both at the Renaissance Toledo Downtown Hotel, chef Aaron Lawson makes crispy calamari by coating the body and tentacles of squid in a high-gluten flour mix cut with a spices such as paprika and white pepper, and then flash fries them in hot oil for 45 seconds.

Chefs use a variety of oils and cooking temperatures depending on the type of seafood being prepared.

He said he likes the oil for its high smoke point.

The fish in the dish vary by season and might include totani (squid), sardines, aquadelle (smelt), sciabola (silver fish), triglia (red mullet), which are lightly dusted in salted flour and fried for less than two minutes at 375 degrees Fahrenheit.

Brian Hinshaw, corporate executive chef of the Ocean Prime seafood chain, based in Columbus, Ohio, says his favorite oils to fry fish in are soybean and canola, but advises that whatever oil is used must be clean.

“If it turns golden brown in about 45 seconds, your oil is to temp,” he said.

“It adds such a great flavor to all kinds of seafood,” he said.

For Lauro Romero, executive chef at King Tide Fish & Shell in Portland, Ore., great fried seafood is all in the timing.

Take his calamari, a dish that comes and goes on the menu at lunch, dinner or as a nightly or weekly special.

“I always brine in milk or buttermilk [which tenderizes it] and coat on a mixture of flours and corn meal,” Romero said. “Frying it is about timing and listening to the sound the oil makes, it will tell you when it’s ready and perfectly crunchy.”