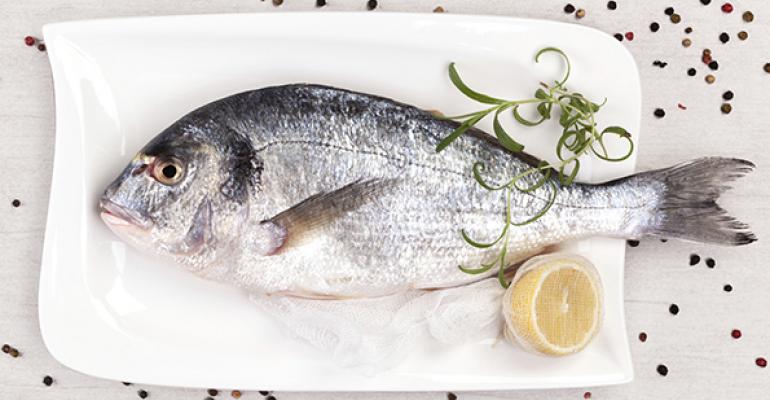 “Sustainability” is a popular buzzword when it comes to seafood.

Ideally, it means farming or catching fish and shellfish in such a way that the animals will be able to reproduce in sufficient numbers so that we can continue eating them forever. Their habitats will remain intact and their populations will remain fairly constant.

But as demand for seafood rises, some chefs wonder whether “sustainability” is a realistic term.

“It just doesn’t make any sense. You can’t just keep harvesting wild fish and expect them to be there forever. It’s not realistic,” Jeremy Sewall, chef-owner of Island Creek Oyster Bar and Row34 in Boston and Lineage in Brookline, Mass., told Nation’s Restaurant News earlier this year.

“We all know it’s a marketing term,” said David Varley, executive chef and culinary director of RN74 in Seattle. “It’s a value-add for the people that are selling it to chefs, and for the chefs who are selling it to customers, but what does it really mean?”

The National Oceanic and Atmospheric Administration, which governs American fisheries, claims that any fish harvested in the United States “is inherently sustainable as a result of the rigorous U.S. management process that ensures fisheries are continuously monitored, improved and sustainable.”

However, Varley, who fishes recreationally for steelhead salmon on Washington’s Olympic Peninsula, has seen the population of that fish on the Hoh River dwindle as fewer of them return from the ocean.

“The numbers clearly indicate that this is not a sustainable fishery. There’s nothing sustainable about it. The only thing it’s sustaining is the eventual extinction of the fish in this system,” Varley said.

Even if you accept that most American commercial fisheries are sustainable, it’s a challenge to ensure that you’re actually getting what you think you’re getting when you buy seafood, according to conservation organization Oceana.

Ben Pollinger, executive chef of Oceana restaurant in New York City — unrelated to the advocacy organization — said that while some suppliers provide traceability documentation, it comes at added expense.

“I’d rather have traceability, but I’d be at a financial disadvantage,” Pollinger said.

When he can, Pollinger buys directly from the source, “which for me, for the most part, is oyster farmers on Long Island.”

For Oceana and sister restaurants Molyvos and Abboccato, most of the fin fish is purchased by the parent company’s buyer at the Fulton Fish Market, Pollinger said.

Although the market is still relatively close to the source — the fish market vendors buy directly from fishing boats — it’s distant enough to muddy the waters of traceability, as vendors are hesitant to provide the names of the fishermen they purchase from.

“They’re always going to be concerned about being undercut by someone else, or someone else stealing their source or circumventing them,” Pollinger said.

Varley said it is important to insist on finding out exactly where the fish comes from.

Shawn Cronin, business program manager for the Monterey Bay Aquarium, whose Seafood Watch guide is used by many chefs and consumers to gauge the sustainability of a particular type of seafood, said chefs and other seafood purchasers should find three facts about the seafood they buying: What species it is, where it is from and how it is caught or farmed.

“I think the No. 1 thing is … establishing that relationship with your suppliers and trying to get that information,” Cronin said.

Sometimes, that might mean more than just getting the market name or common name of a species, “because a lot of things could have the name ‘snapper,’” he said.

“So sometimes, especially for those for which you might be a little unsure, find out what it really is. If that requires getting the Latin species name, the supplier should have that. If they’re telling you that’s not possible, I would question that pretty hard and maybe reach out to another vendor. You should be able to know what you’re buying,” he said.

From there, buyers can look at literature about the specific species from that fishery and determine if the method by which it was caught, or the process through which it was raised, in the case of farm-raised seafood, fits the buyer’s sustainability standards.

“We’re thinking that is the long-term solution for seafood fraud and to make sure that the seafood that’s on your plate is what it’s being advertised as,” Brogan said.

Such a program would need to be flexible, he said, because there are wide variations on how seafood moves through the marketplace.

“You can’t put a gill tag on every fillet, but it could go in lots of fish as it’s moved through processing — things to ensure the origin of the fish and the identity of the fish,” he said.

Although traceability might have to start at the processor rather than the boat, or at the very least the date of landing, “we can do a heck of a lot better than what we’re doing right now, where it’s very generic terms and not much in the way of specificity on how it was caught, where it was caught, when it was caught — all of those [factors] that are critical details as we make informed choices about the seafood that we’re eating,” Brogan said.

The White House has created an initiative to support such traceability. A presidential task force created last year unveiled in March its plan for cracking down on seafood fraud and illegal fishing.

The task force’s recommendations included signing on to international protocols, such as the Port State Measures Agreement, which requires ports of call for foreign vessels to collect detailed information on those vessels’ fishing activities and inspect the fish on board.

It also requires establishment within a year of best practices for catch documentation and data tracking, as well as monitoring, surveillance and observer programs. Within six months, it has requested from the task force a list of information and operational standards needed for an effective seafood traceability program.

Additionally, it directed the departments of Defense and Homeland Security to include threat analysis of illegal, unreported and unregulated fishing as part of national security.

The task force targeted the first phase “of a risk-based traceability program to track seafood from point of harvest to entry into U.S. commerce,” to be established within 18 months.