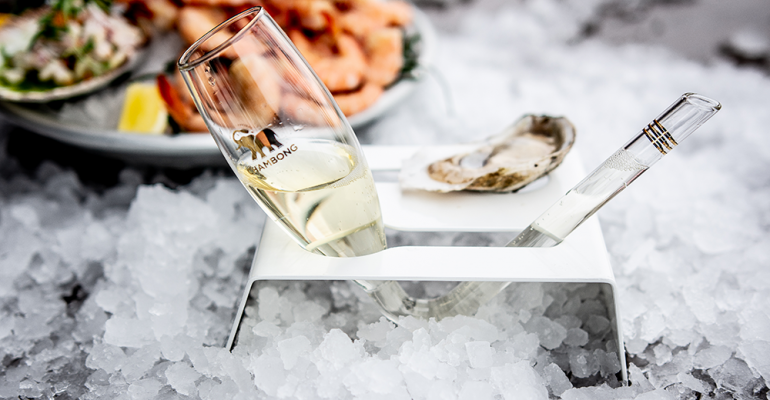 Photos: Mayter Scott
For $5, diners at Marsh House can down a “chambong" and an oyster.
Seafood Trends

Chefs give new treatments to the classic raw bar

With more diners open to eating raw seafood, more chefs are expanding their menus beyond raw-bar basics such as chilled oysters and clams, and cooked shrimp, to include more composed raw dishes, such as ceviche, crudo and sashimi.

Some are also pumping up their presentations to reel in less adventurous eaters, while others, excited about the growing interest in raw seafood, are opening up entire concepts focused on the concept. 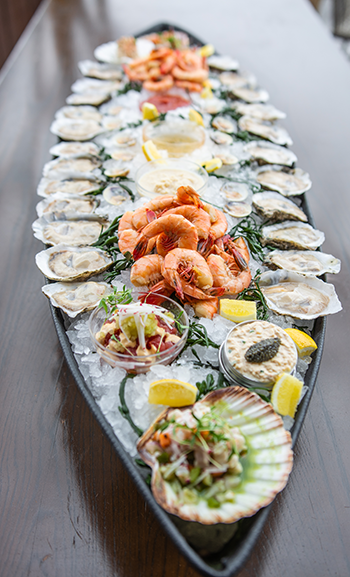 “The description is on the menu, but people are always blown away when we drop the boats on the tables,” Duensing said

During happy hour, Marsh House also offers a “chambong” and oyster pairing. For $5, diners get champagne in a bong-style glass to chug either before or after slurping a single oyster.

“If one table orders them, it's a sure bet that another table is going to see them and want to try it out, too,” Duensing said.

Newly opened Cut by Wolfgang Puck at Rosewood in Washington, D.C., has a raw bar intended to feel more like a sushi counter-meets-chefs table, with lots of composed raw dishes.

“This is not your typical raw bar,” executive chef Andrew Skala said. “We are creating based off what is available both seasonally and from our own personal experiences and travels, and the memories we made, and the flavors we tasted.”

“I really try to approach the composed dishes from a more creative standpoint, and one that's unique for diners,” Skala said. “Each dish transports me somewhere in the world, but ultimately starts here in D.C. and starts with passion."

To court after-work raw seafood lovers, Lamia's Fish Market, a new seafood-centric spot on the Lower East Side of New York City, offers the Early Catch menu, available from 4 pm to 6:30 pm Sunday to Wednesday. Among the options are a dozen raw oysters paired with a bottle of Muscadet wine for $49 and a selection of oyster shooters, such as the $11 Sherry Shooter made with Dijon mustard, an East Coast oyster, and sherry shaken and topped with caviar and microgreens. Also available are a selection of raw oysters by the half dozen and a rotating trio of ceviches.

"We created this menu in order to allow guests to come in and enjoy a quick bite with friends and family after work,” owner Lamia Funti said. “Everything on the menu is shareable  … which makes for a fun, yet relaxing evening. "

When The Shuckin' Shack Oyster Bar, a 15-unit family dining seafood restaurant, opened at its new Wilmington, N.C., location, it included a raw bar with oysters, clams and cooked and chilled crab legs displayed atop crushed ice. While The Shuckin’ Shack offers the same raw options at all locations, this is the first time they are displaying them in the front of the house as an interactive experience for guests.

“It's the first thing that people see when they walk in, and we've had a lot of customers compliment the raw bar and have gotten a lot of great reviews,” said Matt Piccinin, The Shuckin’ Shack Co-founder. “It separates us from other restaurants and oyster bars so we knew that this was something that was important to us to be the center focal point; this is a point of differentiation for us.”

Andrew Gruel, chef and founder of fast-casual seafood chain Slapfish, based in Huntington Beach, Calif., has opened a variation on the concept focusing on raw seafood. At Raw Bar by Slapfish, he is experimenting with creative ways to bring people in and get them as hooked on oysters as he is.

“I’m obsessed with oysters in every way, from an environmental perspective and a taste perspective,” Gruel said. “A new day has arrived and consumers are starting to understand oysters as not just these slimy things.”

The year-old, full-service concept, which is connected to the Huntington Beach location of Slapfish, features simple tables and a bar displaying a rotating selection of chilled seafood — oysters, crab legs, lobster cocktail, poke — along with a robust selection of beers.

During “Slappy Hour” from 4 pm to 6 pm each day diners can partake in “Beat the Clock,” during which raw oysters start at $1 a piece and increase in price every 30 minutes until they reach regular price at 6 pm.

“We’re totally jammed,” said Gruel. “Some people are coming in and crushing three dozen oysters in a sitting.”

The new concept has been so successful that Gruel says he plans to expand it, scaling it up as a Slapfish combo concept.

August 26, 2019: This story has been updated with the correct spelling of Marsh House.