Chefs focus on the tenderness and char of octopus

With American appetites for octopus swelling year after year, more chefs are seizing the opportunity to express their love of — and flex their creativity for — the tentacled cephalopod.

“I love the texture of octopus because it gives you everything you want in three to four bites,” said chef Victor Albisu. “An amazing mouthfeel when cooked tender, a crispy outside and a nice glaze.”

Albisu serves octopus at both of his restaurant concepts, Taco Bamba, his fast-casual taqueria with five locations in Virginia, and Poca Madre, his upscale contemporary Mexican restaurant in Washington, D.C.

Related: Flavor of the Week: Escabeche embraced by fine-dining restaurants 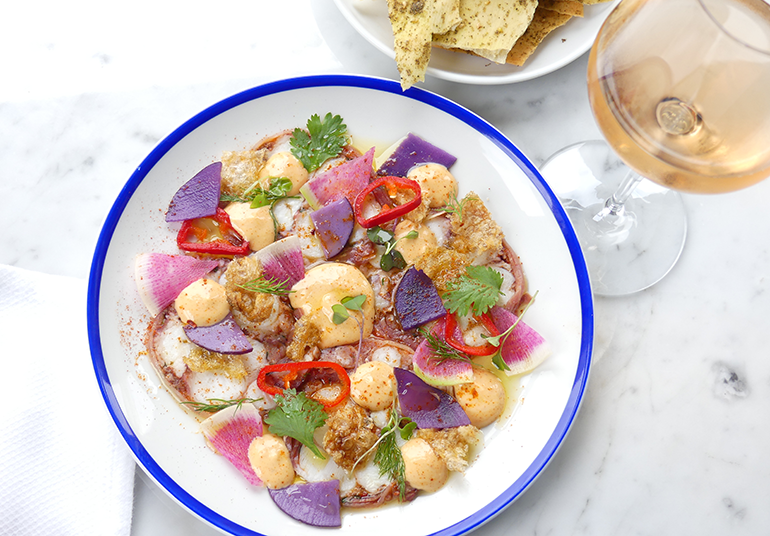 “I wanted to do something fun based off that dish to honor one of the classic restaurants that use to be in the area,” Albisu said.

In contrast, at Poca Madre he serves the cephalopod crispy with mole blanco, ink pepper jam and sunchokes.

"Having deep roots in the Moroccan and Spanish cultures, I grew up eating octopus prepared multiple ways,” restaurateur Lamia Funti said. “With the octopus carpaccio dish on our new menu … we let the flavor of the octopus stand out by using a simple red wine vinegar and seasoning with sea salt, pepper, and olive oil."

While it is not a new method, Kris Morningstar, chef of Jarman’s Restaurant at H Club in Los Angeles, sees charring as a trending method of cooking octopus thanks to unique flavors profile that results.

Morningstar had cooked his octopus low and slow for year, either by simmering or in sous-vide.

“Then, one day I tried a similar preparation to what I now use on the octopus for pig ears and the results were mind-blowing.”

“Before we char, we confit the octopus in olive oil with garlic, chile de Arbol and bay leaf,” Morningstar said. “I think confit gives the best, meatiest texture for the octopus. The charring crisps the outside and creates a great juxtaposition for the tender inside.”

Morningstar even adds char, and depth of flavor, to the aioli, folding charred, powdered leeks and onions into an otherwise straightforward aïoli made with lemon, garlic, egg yolk and neutral oil.

Also playing up char is chef Henry Wesley of 8UP, a rooftop restaurant and lounge in Louisville, Ky. Wesley is currently serving wood-fired octopus glazed with gochujang honey over white beans. The caramelizing glaze amplifies the smoke and char.

At Onward in Chicago’s Rogers Park neighborhood, executive chef Patrick Russ reinterprets the flavors and textures of a traditional Japanese snack in his octopus dish.

“My favorite thing to eat in this world is Takoyaki — an octopus-stuffed dough topped with a barbecue sauce,” Russ said.

For his version, Russ cooks octopus in sous-vide for three hours. He wraps it in a chickpea pancake and fries it to order. Then he tops it in a Japanese barbecue sauce made with Worcestershire sauce, ketchup, soy sauce, fermented Fresno chile, fermented garlic, brown sugar, granulated sugar and oyster sauce.

To lighten and brighten the dish, he serves it with compressed Persian cucumbers in a ginger pickling liquid

“Our spin is meant to be reminiscent of Japanese street food but with a more refined edge,” Russ said.

Also reinterpreting a classic is executive chef Matt Kuhn of Olivia, a new rustic Mediterranean eatery in Washington, D.C. Kuhn is serving a Galician-style octopus carpaccio, which is typically made with thick-cut octopus, olive oil, boiled white potatoes and paprika.

“What makes chef Kuhn’s dish modern is his preparation of the octopus, said bar manager Tim Hays. “Chef wraps the tentacles in Serrano ham and then chills it. The ham and octopus meld together, and chef thinly slices the octopus, carpaccio-style, resulting in a detailed presentation of the tentacles on the plate.”

The octopus carpaccio is served with pickled purple potatoes, a peri-peri aïoli and crunchy chicharrónes.