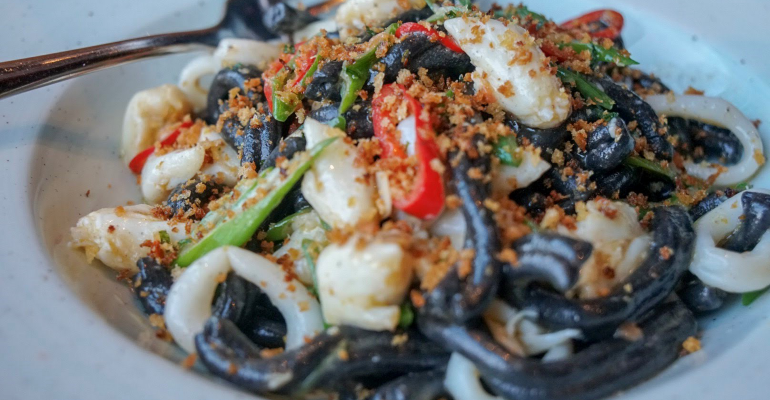 Chefs experiment with calamari outside the fryer basket

Squid gets grilled and wok-fired, and even made into noodles

What would you do if you took possession of a restaurant and found 60 pounds of frozen squid in the walk-in?

For chef and restaurateur Kenny Gilbert, who likes to do things “a little different,” the answer wasn’t baskets of fried calamari with marinara sauce, but rather a ramen bowl with udon-style noodles made of puréed squid.

“In America, we’ve resorted to doing things the masses are going to eat,” Gilbert said.

Next week, Gilbert will debut his squid “pasta” dish at the new Gilbert’s Southern Kitchen & Bar in Jacksonville Beach, Fla., one of four concepts he operates in the area.

To make the noodles, Gilbert purées squid with egg whites and flour to make a paste and pipes it into water. He plans to serve the noodles, which he described as having the flavor of dumplings or spaetzle, in a bowl with a smoky tomato broth, garnished with radishes, kale, crispy brussels sprouts and benne seeds.

“It’s a fun spin on a something kind of classic,” he said.

Gilbert is one of a number of chefs forgoing fried calamari in favor of alternative, but still approachable, preparations.

“Fried calamari is often the preferred preparation in the U.S., but in coastal Italy and Spain, it is more often sautéed or lightly charred on a plancha (piastra in Italian) or a wood-burning grill,” said Matt Adler, executive chef of Schlow Restaurant Group’s Italian concepts. “Those preparations do a much better job of allowing the focus to be on calamari — not the breading or sauce that comes with it.” Grilled squid adds another layer to this Albacore tuna dish with Vadouvan vinaigrette at Red Star Tavern in Portland, Ore.

“It was bright, briny and fresh,” Adler said. “When I got back, I wanted to incorporate local ingredients, like Maryland crab and ramps.”

"It's a nice opportunity for guests who want to enjoy calamari, but something lighter than the typical fried dish they may be used to,” said Oyster Bah executive chef Donny Farrell. “Now that there is more availability of fresh product, chefs no longer have to always fry it, rather allow the freshness of the calamari to shine."

“Although slightly modest in flavor compared to yellowfin, I decided to add the grilled squid to develop another layer with the vinaigrette and tuna,” Lane said. “The charring gives the squid a nice flavor and crust, but still keeps it tender.” At the soon-to-open Lupo Marino in Washington, D.C. fried calamari is made approachable and portable via paper cones.

While he serves grilled squid, Lane is a big fan of fried calamari.

“Fried calamari is still one of the best ways to prepare and eat squid because it gives that textural contrast — crunch on the outside and tender on the inside,” he said. “The evolution of diners’ eating habits — wanting less gluten, paleo, etc. — has inspired chefs to take a different approach to what they are offering.”

Corporate chef Matteo Venini is also a fan of fried calamari, and fried seafood in general, which will be the focus of the menu at Lupo Marino when it opens in April at The Wharf development in the Southwest Waterfront of Washington, D.C.

The Italian street-food concept will serve a variety of fried seafood dishes, including paper cones filled with fried calamari mixed with other fried foods, such as shrimp and potato chips.

“Serving [fried calamari] in a folded cone makes it easy to transport while taking in the sights,” Venini said.