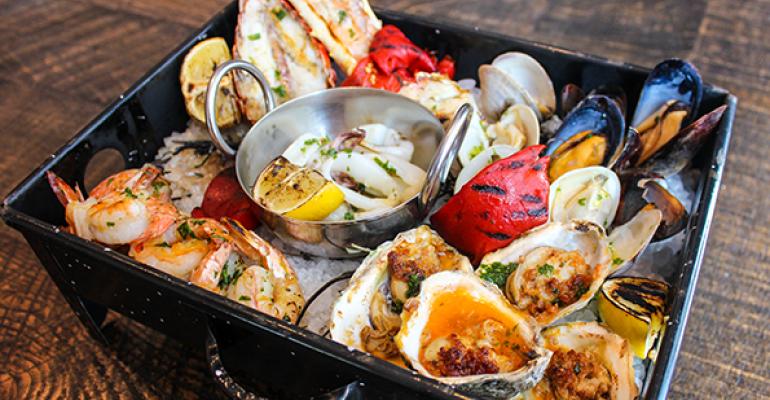 <p>Oysters get grilled, torched and served in a special smoke box at Del Campo in Washington, D.C.</p>
What's Hot

Bacon, cheeses, Champagne and other luxurious items are paired with the shellfish

As more diners embrace eating oysters, more chefs, especially those at fine-dining restaurants, are coming up with new ways to serve them. While serving oysters raw on the half shell remains a popular preparation, many chefs are using their creativity and skill to elevate the humble mollusk to rich extremes.

“Oysters are great on their own, fresh,” said Tom Dunklin, executive chef of Three Degrees in Portland, Ore. “[But then] you can take that oyster — briny, meaty flavor — to the next level.”

Dunklin does just that with his Crispy Oyster Sliders. Made with pecan-crusted oysters topped with barbecue bacon, brie and fennel slaw, served on a house-made sweet Hawaiian roll, the mini mollusk sandwich sells well as a bar snack or ordered in multiples to share at the table. Bacon Wrapped Oysters served with a Rockefeller sauce, made by cooking down mustard greens and collard greens with a ham hock, are also a popular item on Dunklin’s menu.

Over-the-top oyster dishes appear on the menus of many of Black Restaurant Group’s concepts, including Pearl Dive Oyster Palace in Washington, D.C., and Republic in Tacoma Park, Md.

“The more decadent seafood offerings — crab, shrimp, lobster, oysters — lend themselves to higher-end preparations,” said Danny Wells, chef and partner at Republic and opening chef de cuisine at Pearl Dive Oyster Palace. “If you are going to go all out, then go all out.”

Among the decadent dishes at Pearl Dive Oyster Palace is the Tchoupitoulas, which Wells describes as a “hybrid of different oyster dishes all crammed into an oyster shell.”

Tchoupitoulas, which is the name of a street in New Orleans, is made with oysters poached in bacon fat, blue crab, tasso ham and roasted corn. Other dishes include Angels on Horseback, grilled, bacon-wrapped oysters with white wine and vinegar reduction, and classic Oysters Rockefeller. At Republic, Wells serves oysters cornmeal-fried or wood-roasted with garlic chile butter, or as specials stuffed or topped with an array of seasonal ingredients.

While rich oyster dishes are popular on menus at restaurants that favor the fruits of the sea, they’re also proliferating on menus at steakhouses around the country.

Jay Murray, executive chef at Grill 23 & Bar in Boston, offers Torched A5 Oysters. Murray spoons rendered Wagyu beef fat with garlic on top of freshly shucked Cotuit oysters, then puts the top shell back on and torches each oyster for about 30 seconds to liquefy the Wagyu fat and slightly cook the garlic.

At Del Campo, a South American steakhouse in Washington, D.C., chef Victor Albisu chars, burns and smokes just about everything on the menu — even oysters. Albisu makes Chorizo Butter Oysters, which are grilled Chesapeake Bay oysters that are topped with chorizo butter — made by whipping together butter, diced and rendered Spanish chorizo, shallots, garlic parsley and Espelette pepper — and then delivered them to the table in a box still smoking from herbs that are torched just before serving.

Oysters appear on several sections of the tapas menu at Capa, the rooftop Spanish steakhouse at the Four Seasons Resort Orlando in Orlando, Fla. On the appetizer section is Ostras, Blue Point oysters on the half shell with broiled jamon Iberico fat and a salsa verde made with nasturtium leaves, olive oil, vinegar and lemon juice.

"We use the jamon fat because of the intensity of flavor it brings,” said Capa executive chef Tim Dacey. “Its earthiness and nuttiness really offsets the brininess of the oyster, making a well-rounded dish.”