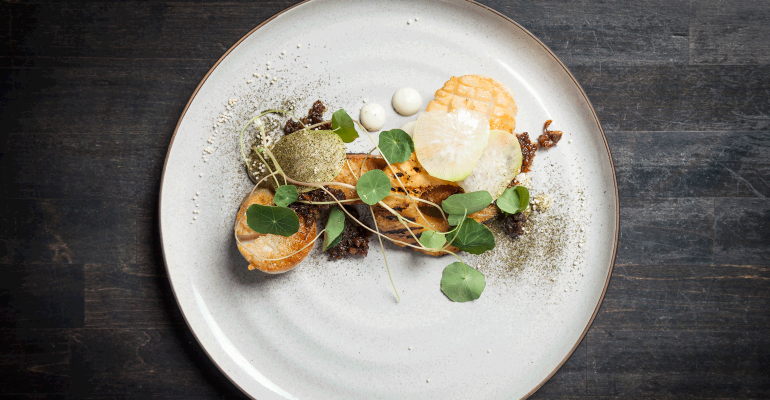 Chefs bring surf-and-turf up to date

The popular pairing gets a fresh spin

The popularity of surf-and-turf peaked decades ago, but the decadent pairing of filet mignon and lobster tail still remains on many restaurant menus. These days, chefs are creating fresh takes on the perfect marriage of meat and seafood.

“I love the way [meat and fish] play off each other, said Kris Delee, executive chef of The Duck Inn in Chicago. “Usually, I prefer the surf over the turf, but when that marriage is just right, the flavors they bring out in each other are unbeatable.”

At The Duck Inn, where he has been executive chef since March, Delee makes surf and turf even more decadent by pairing rich pork belly with delicate and sweet scallops.

“Fish is usually so lean, and the fatty richness of the pork gives the dish a playful twist of opposing textures,” Delee said.

At Requin in Fairfax, Va., chef Jennifer Carroll puts seafood and meat together with a twist in dishes such as The Requin Classic Mussels, made with steamed Blue Bay mussels with hard salami, white wine, shaved garlic and shallots, topped with garlic and herb fries and served with a side of garlic bread; and The Croque Salmon, with ham and smoked salmon, Gruyère and bechamel.

“I love meat and seafood together,” Carroll said. “You get the best of both worlds — you can turn a really delicate, light ingredient into something more powerful with the different textures, mouthfeel and chew of meat. On the flip side, you can make a very heavy, fatty dish feel lighter.”

The meat-and-seafood-laden mussels were inspired by Carroll’s desire to do a simple classic French mussels dish without adding cream, crème fraiche or more butter.

“I still wanted that unctuous flavor and mouthfeel that you get by adding those ingredients, so it hit me — render out salami with the garlic and shallot before you add the mussels,” Carroll said. “[It’s] pure flavor.” Inspired by the flavors of paella and the shareability of tapas, chef David Burke offers octopus and chorizo kebobs at Tavern62 by David Burke in New York City. The surf-and-turf on a stick is made with octopus, chorizo, olives, garlic and chilis, and is dramatically served upright on a block with the octopus tentacles curled skyward.

“I’m very fond of combining meat and fish together,” Burke said. “I think it the combo lends itself to creativity and a fun opportunity to try a couple of different tastes on the same plate.”

“Good seafood and good steak each possess their own unique and unmistakable richness,” executive chef Luisteen Gonzalez said. “Layering those flavors together makes for a guiltily delicious dish.”

The decadent dish is available only on the restaurant’s secret menu, so guests have to know about it to order it.

Other restaurants offering fresh takes on surf-and-turf include Centrolina in Washington, D.C., where chef Amy Brandwein serves chipirone, which pairs stewed baby squid with bortolotti and ‘nduja (a spicy, spreadable pork salumi); and MB Steak in Las Vegas, a newly opened steakhouse from brothers David Morton and Michael Morton, which is offering a surf-and-turf tartare appetizer of filet mignon and Ahi tuna with pommery mustard, smoked salt, egg and shallot.