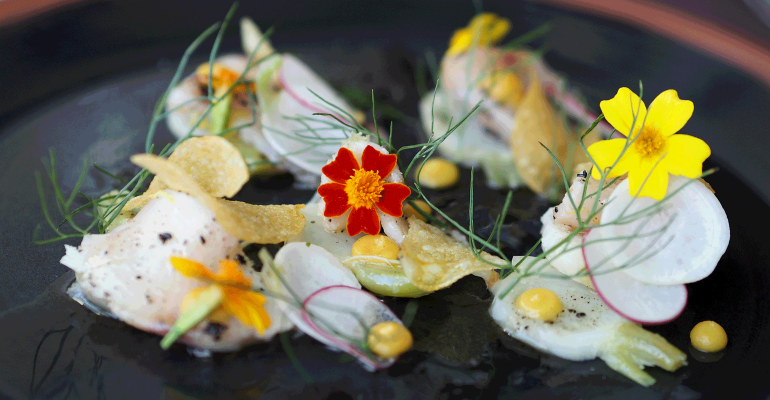 Piggy backing on the popularity of poke — the Hawaiian raw fish salad that is among the hottest food trends of the moment — chefs across the country are creating raw fish dishes with ingredients that crunch, crackle and even pop.

At the seasonal, Texas-centric restaurant inside the Hotel Van Zandt, Werley is serving watermelon and hamachi ceviche with smoked harissa, serrano, candied garlic, basil and a sweet potato chip.

He said he used sweet potato chips to “add a pleasant texture to the dish while not taking away from the subtleness of the hamachi. Also, to be different and think outside the box.”

Similarly, recently added to the menu at Ousia, a new Greek-inspired, Mediterranean restaurant in New York City, is a branzino tartare prepared with smoked black sea salt and served with vinegar chips.

“We are using chips to have something crispy to contrast the tenderness of the fish,” said sous chef Vasiliki Vourliotaki. “The vinegar works two ways: It tastes great on a salty potato chip, and also gives a brightness to the fish.” Added at the beginning of the summer, Vourliotaki said the dish has been selling well in part because it satisfies diners’ craving for more refreshing and cooler dishes during the hotter months.

Also making raw fish and chips is chef Tory Miller of Estrellon in Madison, Wis., who is serving a hamachi crudo that’s been infused with smoke and is served with lemon, brown butter, radishes and crunchy potato chips. Miller said he likes serving the hamachi raw with a slightly smoky element, and amping up the savory flavor by serving the fish with potato chips, which also provide a crispy textural component.

“Avocado toast has always been a simple and delicious go-to snack for me,” said Joann Chung, founder of Pokeatery. “One day I decided to mash up my favorite snack with my poke passion and it tasted incredible, so I began experimenting with different poke variations topped on avocado toast.”

Pokecado Toast is $10.50 and includes two toasts per order.

“We’ve received fantastic feedback since the launch, with customers telling us that the new dish is delicious, filling and affordable,” Chung said.

Raw fish gets crunch from a cracker in the ahi tuna and watermelon tostadas starter at Summer House Santa Monica, which has locations in Chicago and North Bethesda, Md. Chef and partner Jeff Mahin makes the crunchy bites with cubed ahi tuna, Thai chile, avocado, crema and cilantro on top of house-made tortilla chips.

Harrington has been making versions of the dish on and off for a decade. It’s made with cubed raw tuna, locally grown radish, cucumber, green onion, avocado and togarashi. It’s then garnished with edible flowers from the restaurant’s garden and those chile-flavored Pop Rocks that are activated when a yuzu-ponzu sauce is poured on them tableside.

“You hear them crackling in your brain with each bite,” Harrington said.