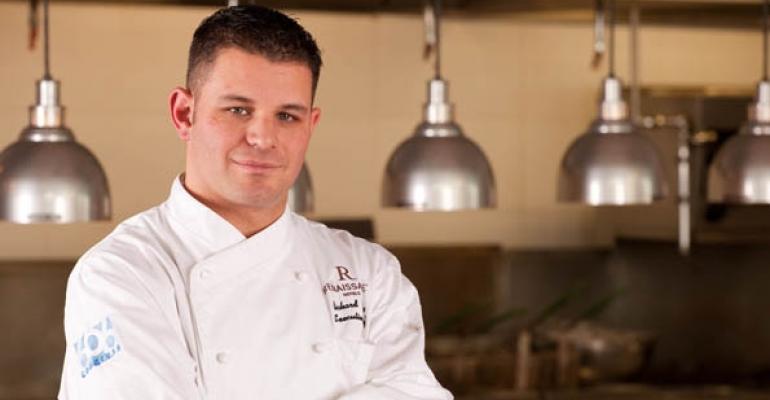 Chef makes the most of ‘trash fish’

Chef Richard Garcia has made a point to prepare dishes using unusual fish and give customers something they never even knew they wanted.

Richard Garcia, executive chef of the Renaissance Boston Waterfront Hotel, has developed a unique sustainable seafood program by giving his customers what they didn’t know they wanted.

Eschewing local favorites like cod and haddock, Garcia is introducing his customers to fish such as sea robin, dogfish, butterfish and Acadian redfish.

Garcia — who heads the Boston chapter of the Chefs Collaborative, an association devoted to sustainable sourcing and safeguarding the environment — said his focus is “on the fishermen instead of the fish.”

Sustainable seafood organizations label seafood as green, for the best choice; yellow, for a questionable choice; and red, for seafood whose population is threatened. “If one thing should be on the red list, the fishermen should be,” Garcia said.

Local restrictions on catching popular but overfished species have made it more difficult to make a living if those are the only fish consumers want to eat.

By paying $2 or $3 per pound for so-called “trash fish” that otherwise might be regarded as worthless, Garcia and other chefs help fishermen earn a decent living. “At the same time, we’re letting the cod and haddock stocks hopefully rebuild,” he said. 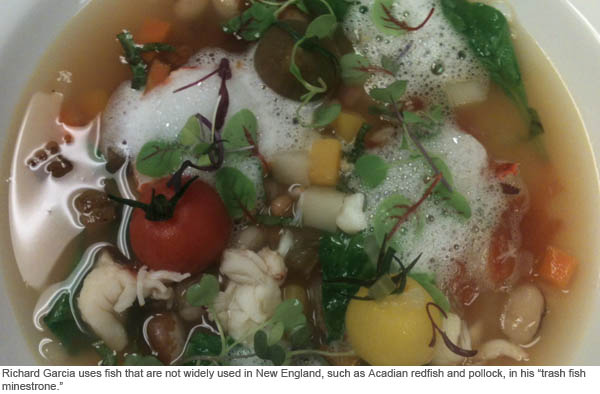 Garcia said his approach also makes sense from a business perspective. For instance, cod fillets or loins can cost $7 to $10 per pound, while pollock, which Garcia said he thinks has a better flavor and texture that most people can’t tell from cod or haddock, doesn’t rise above $5 per pound.

“Your margin increases, or on the flipside you can lower your pricing a little bit. It works for everyone. I’ve paid $2.50, $3 a pound for sea robin and charged $28 for a nice 10-ounce portion.

“People have the misconception that running responsible product doesn’t make you money, but by utilizing some of this delicious fish that people don’t necessarily know about, you’re also doing something great for your bottom line,” he said.

Garcia uses trash fish in a minestrone, including Acadian redfish — which he said is a great substitute for red snapper — in addition to pollock and lobster. Although lobster is prized now, Garcia noted that New England’s favorite crustacean was once shunned, and served mostly to children, indentured servants and prisoners.

Sometimes a little finesse is required to get customers to try new fish, or in the case of bluefish, to convince them to try again a fish they haven’t liked in the past.

A popular sport fish in New England, bluefish is an oily species that quickly takes on strong, fishy flavors. To make matters worse, commercially caught bluefish traditionally has not been treated well. “Fishermen don’t like what bluefish do to their gear, so they just treated it like crap,” Garcia said. “But when it’s treated right, it’s some of the best fish out there. It’s pink, not that brown that you’re used to.”

To convince customers, Garcia has given free samples of the fish, and he said that can win them over.

Garcia also was an early user of Trace and Trust. Fishermen participating in the program, which is about two years old, assign each fish with an ID that is given to customers, who can then look up their fish online.

“It will tell them how the fish was caught, when it was caught, the name of the fishermen,” Garcia said, allowing customers to be connected to their fish in a way that wasn’t possible before. “When you put those things together, it kind of creates an experience for our guest. When they’re actually connected to their seafood, it really helps us be able to sell it,” he said.

Although chefs hesitate to put fish like fluke or scup on the menu, Garcia said, “If you put a story behind it and have that training for the front of the house, it’s going to be much easier to move the product.”

Figuring out what exactly to do with a new fish can be a challenge, Garcia said, but he added that if you end up wasting 10 pounds of a $2-per-pound fish while experimenting with it, you’ve only lost $20.

And often the fish taste better than cod and haddock, he said. “All sea robins eat are crab, lobster and scallops, so their flavor is just amazing. You get this almost shellfish-like flavor that you don’t get in many fish,” he explained. “We’ve just been so used to what’s always been sold, but we’ve got this abundance of fish with amazing textures and flavors.”

Garcia currently offers fluke tartare in his lounge, and his 25,000-square-foot catering facility has underutilized species too.

“You will find ‘trash fish’ in every outlet at this hotel. It’s pretty cool,” he said.

Correction: December 6, 2012 A previous version of this article misstated that the Renaissance Boston Waterfront Hotel had a sushi lounge. The hotel has a lounge.