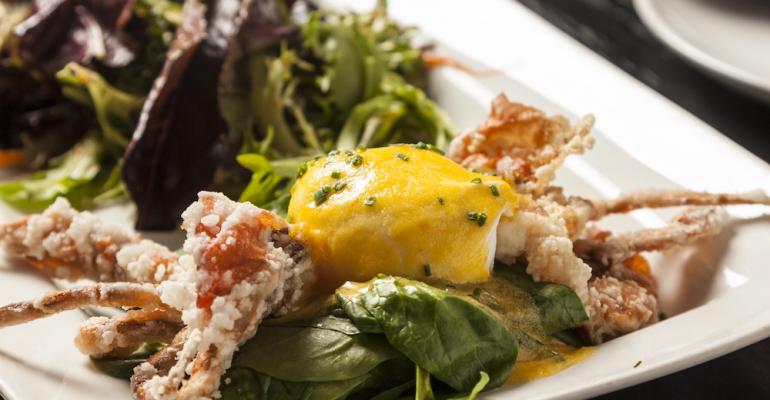 Seafood is becoming a thing at breakfast.

According to Datassential’s most recent Seafood Keynote report, mentions of fish and shellfish have been growing on breakfast menus by at least 40 percent over the past decade. While some seafoods such as smoked salmon, shrimp and crab have been served for breakfast for years, relative newcomers such as oysters, mussels, anchovy and cod also are finding a place on morning menus.

Related: Chefs focus on the tenderness and char of octopus

“Although most people would turn away from seafood early in the morning, the oysters get your blood flowing and the crispy crunch of a fried oyster is something that guests crave while brunching," said chef Donny Farrell of Oyster Bah in Chicago.

Currently on his brunch menu is a fried oyster Benedict made with fried oysters, arugula, poached egg and Tabasco butter. For those who can’t stomach an early morning oyster but still want seafood at brunch, Farrell offers shrimp and grits made with lobster-tomato gravy, Parmesan grits, and poached eggs.

Related: Flavor of the Week: Nuoc cham brings sugar and umami to menus 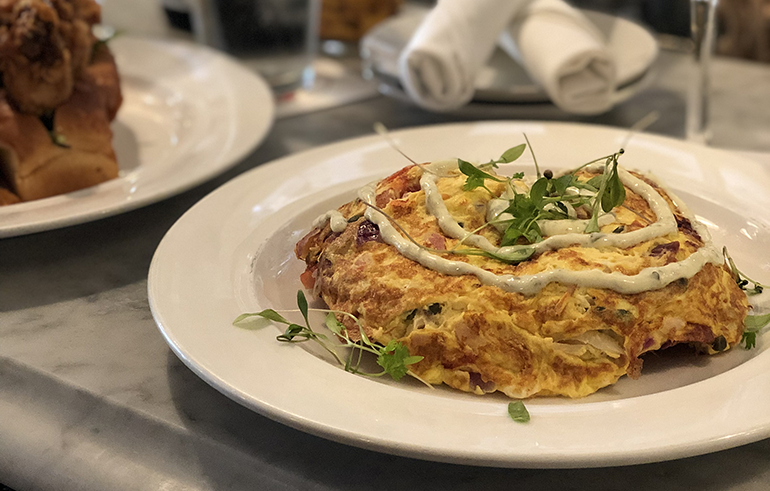 Oysters, bacon and eggs and more are featured in the Hang-town Fry Frittata at select locations of Hank’s Oyster Bar.

Oysters are all over Jamie Leeds’ brunch menus at her various concepts in the Washington, D.C., area, including Hank’s Cocktail Bar, Hank’s Pasta Bar, and four locations of Hank’s Oyster Bar. Among the brunch favorites is the Hang-town Fry Frittata, a classic Southern California dish Leeds says was made famous during the Gold Rush era, featuring eggs, fried oysters, bacon, tomatoes and onion.

All locations of Hank’s Oyster Bar also serve raw oysters on the half shell, sake oyster shooters and fried oysters.

“Any opportunity that poses itself to feature oysters, we take it,” said Leeds. “Raw, steamed, fried, or smoked, oysters should always be included in a balanced diet. They’re power packed with protein and rich in omega-3 fatty acids and minerals — a great way to start any day.”

Raw oysters with mignonette and celery and steamed clams are among the many seafood dishes on the brunch menu at Shaker & Spear in Seattle, but executive chef Carolynn Spence’s favorite is the salt cod beignets.

To make them, Spence soaks the fish in a mixture of milk, thyme, olive oil, garlic and black pepper, then she blends that with a dough made from eggs, wheat flour, butter and nutmeg. Five beignets are fried in canola oil to order, and served atop salsa verde inside the wood boxes in which the salt cod is delivered.

“There’s just something about rich, savory salt cod. It’s almost like adrenaline for your palate,” Spence said. “Same goes for anchovies, fresh herbs and acid which balance it out as their sauce.” On the brunch menu at Henrietta Red in Nashville, chef Julia Sullivan offers several seafood dishes, including wood-roasted oysters prepared either with green curry or Calabrian chile butter and breadcrumbs, and mussel toast with sunchoke, fennel, chile, labneh, and kale za’atar on top.

Also offering a seafood toast is Kelly Fields, chef and owner of Willa Jean in New Orleans. Her BBQ shrimp toast is made with grilled sourdough bread topped with burrata and Gulf shrimp slathered with NOLA-style barbecue sauce made with shrimp heads and shells, Worcestershire sauce, Creole seasoning, garlic, butter and black pepper.

At Sunda, with locations in Chicago and Nashville, executive chef and partner Mike Morales gives the popular crab cake benedict a Maryland-meets-Japan touch, and reduces kitchen waste, with crispy Maryland softshell crab and a hollandaise sauce made with siracha and the Japanese spice mixture togarashi.

“Softshell crab is in one of our sushi rolls featured during dinner, so it was a great excuse for me to incorporate it into a traditional brunch item,” Morales said. “I love the way the hollandaise enhances the already delicious crab.”