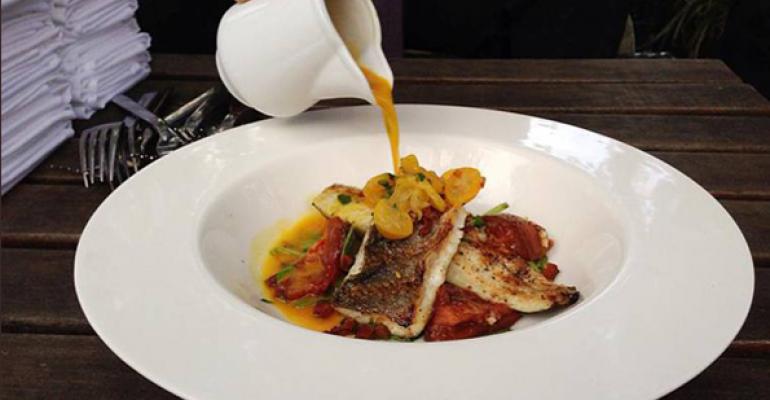 Branzino: The fastest-growing seafood in restaurants

Shrimp, salmon and tuna may be the ultimate triumvirate on restaurant menus, but another lesser-known species is swimming into their territory: branzino. Lately more and more chefs are discovering the Mediterranean sea bass and using it in dishes.

According to Datassential MenuTrends, which tracks over one million different menu items at more than 7,000 chain and independent restaurants, shrimp, tuna and salmon are among the top seafood proteins put on menus. Shrimp is the most common seafood protein served at restaurants, appearing as an appetizer, entrée or side dish on more than two-thirds of all menus. Tuna appears on 42 percent of menus, and salmon appears on 40 percent of all menus.

Though branzino currently appears on just 1 percent of all menus, it is the fastest-growing seafood protein, showing up on 28 percent more menus since 2008. One reason branzino may be making it on to more menus is because Mediterranean dishes overall have been experiencing growth in recent years, in part due to diners’ perception of them as healthier, according to Datassential.

Executive chef Joseph Realmuto has always rotated different fish on and off the menu at Nick & Toni’s in East Hampton, N.Y. But after two decades of fluctuation, customer preference finally drove him to make branzino a staple. “The branzino is what our customers prefer,” he said. “It has very mild flavor, more sweet than most. It’s also a very easy fish for customer to eat off the bone or to fillet themselves. It is an accessible fish for everyone.”

Part of the appeal, said Realmuto, is that he roasts the whole fish, stuffed with fresh lemon and thyme, in the restaurant’s wood-burning oven, and then cooks it in a pan with olive oil, sea salt and fresh cracked pepper. “The wood cooks it at a very high heat which gives it a nice crispy skin and allows it to stay moist at the bone,” he explained. “It also lends a nice smoky flavor to it.” 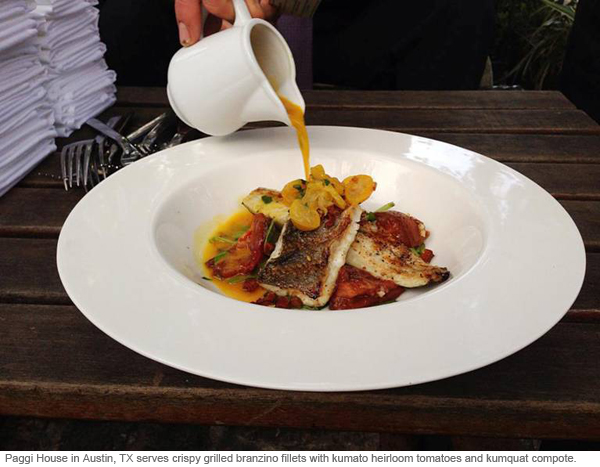 Branzino is also a long-time customer favorite at Patsy’s Italian Restaurant in New York City, where it has been on the menu for about eight years. Though the restaurant sells a lot of decadent dishes, such as Fettuccine Alfredo, the branzino is popular with regulars who want something less indulgent. “It’s a light, nice tasty fish,” said executive chef and co-owner Sal Scognamillo. “I think they like that it’s not a 'fishy' fish, or fatty fish.”

Scognamillo offers a simple, classic whole roasted branzino with lemon, garlic, salt and pepper, basil and oregano, which is then filleted tableside and served with string beans and with mashed potatoes or Italian potato croquettes.

Branzino’s perceived healthy attributes are a strong appeal to some diners, but it’s the fish’s versatility that is most appealing to Sasha Miranda, chef and owner of Miranda in Williamsburg, Brooklyn. “[Branzino] is a really nice, mild fish,” she said. “The fish adapts really well to whatever you put with it.”

At her 40-seat namesake restaurant serves a mix of Italian and Latin American fare. Her branzino is reflection of the blended cuisines, served filleted and grilled with organic quinoa, roasted red peppers, Gaeta olives, Sicilian capers and lemon achiot oil. “It’s a top-seller,” said Miranda. “Quite a few people come back just for that dish.”

Creative possibilities and an introduction from a purveyor are what inspired co-chefs Drew Dunston and Ruston Richardson to add branzino to the menu at Paggi House in Austin, TX. “One of our food purveyors finds really cool things for us to play with,” said Richardson. “It’s just a fun fish to play with, so light and delicious … really easy to prepare.”

After a weekend of experimentation the duo added their new dish to the menu this week. The result is a “rustic and homey” preparation of crispy grilled branzino fillets with kumato heirloom tomatoes and kumquat compote. It’s already getting great feedback from diners, said Richardson.

Though branzino is in the early stages of menu adoption, mostly appearing on menus of fine-dining or independent ethnic restaurants, it has already begun to trickle down to at least one large chain. Last August, Dallas-based Romano’s Macaroni Grill, which has more than 200 locations around the country, added a pan-seared branzino with tomato, arugula and cannellini bean salad to its entrée menu.

At first, the unfamiliar fish didn’t connect with customers. Sales languished and the dish was pulled. Then, in January, the chain added the fish back to the menu, calling it “Mediterranean sea bass,” and it has been a hit ever since.

“Sales have doubled and tripled [at some locations] once we changed the name,” said Randall Warder, Macaroni Grill’s chief concept officer. “It’s a healthy option, under 600 calories. [Also,] it speaks to the Italian, Mediterranean authenticity and is true to the concept of the brand.”