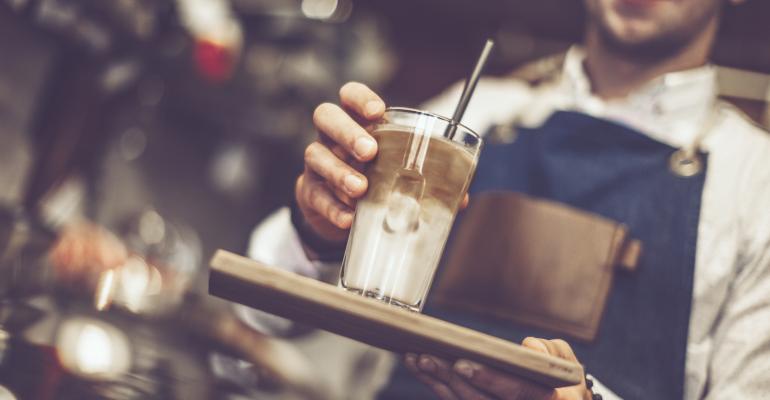 Operators broaden their appeal by catering to customers' diverse preferences for on-trend drinks.

Longer days and warmer temperatures bring a thirst for light, refreshing beverages. It is a time for menu makers to review their offerings and brush up on the trends. Leading the way are customer favorites such as hot and cold specialty coffees, especially cold brew, flavored iced teas, artisanal soft drinks and fruit-and-water beverages like aguas frescas which are hydrating and lightly sweetened.

Ubiquitous in coffee shops, cold brew is growing dramatically in restaurants, although from a small base. It increased on restaurant menus by 55 percent over the past year and over four years by 1,024 percent, according to research from Chicago-based Datassential. Nearly 25,000 chain and independent foodservice locations now offer cold brew — which operators are finding particularly appeals to young adults.

“Our 20- to 30-something customers really love their cold brew,” says Alpana Singh, proprietor of Seven Lions in Chicago. It is one of the favorite items on a weekend brunch menu together with a cucumber and mint cooler, strawberry lemonade, mimosa pitcher and several alcohol-spiked beverages.

Peet’s Coffee is greeting summer with new riffs on cold brew. The Emeryville, California-based chain has introduced Cold Brew Fog, a specialty drink featuring East African Baridi coffee blend whipped with a hint of chicory into a velvety, creamy drink. Cold Brew Fog Latte adds a splash of milk. Mojito Black Tie mixes cold brew with minty mojito flavoring, layered atop sweetened condensed milk and finished with a float of half and half.

Sightglass Coffee in San Francisco offers signature vanilla iced cold brew and several choices of single-origin beans brewed to order over ice with a pour-over dripper. It also features an Affogato Bar where one can have a scoop of artisanal ice cream “drowned” in the Italian fashion with a fresh-pulled shot of espresso. Ice cream flavors and espressos change seasonally.

In Austin, Texas, a wide-ranging beverage menu caters to diverse tastes at Irene’s, a restaurant and bar in the ELM Restaurant Group based there.

Irene’s walk-up window is open daily from 7 a.m. to 2 p.m. serving 20 hot and cold beverages and a light menu of sweet and savory toasts. The former includes drip coffee, familiar espresso-based drinks, chilled coffees and house specialties. The drip coffee is an exclusive house blend of medium-roast Brazilian beans from a local roaster which reflects coffee tastes in the 1950s and 1960s. It is apropos of the eatery’s nostalgic, American comfort food vibe.

Also on offer are cafe au lait with a choice of almond, soy or coconut milk as well as dairy products. Add to that --- iced latte, iced mocha and iced chai latte. Irene’s Original is a chilled blend of cold brew with house-made butterscotch and almond cream. Another refresher, Kool-Aid poured by the glass, echoes the retro feel. “It’s a way to keep the menu fun and playful,” says Yvonne Sharik, former general manager of Irene’s and current general manager of Easy Tiger Bake Shop and Beer Garden, another ELM concept.

Menu makers should also note America’s changing tastes in soft drinks. In 2007, just over a third of high school students drank a sweetened beverage each day, according to a report by the U.S. Centers for Disease Control and Prevention. However, by 2015 that number had fallen to 20.5 percent. House-made/artisan soft drinks, which typically contain less sugar and more natural ingredients, are a growing alternative. They ranked No. 1 among nonalcoholic beverages in the National Restaurant Association’s What’s Hot 2017 Culinary Forecast.

Panera Bread has launched a lineup of new noncarbonated iced teas, lemonades and aguas frescas. They are made without artificial sweeteners, preservatives, flavors or colors from artificial sources and presented with signs disclosing added sugar. Now on offer are iced black tea and plum-ginger-hibiscus tea, both unsweetened, prickly pear-hibiscus fresca lightly sweetened with fruit juice but no added sugar and moderately sweetened agave lemonade and blood orange lemonade.

The cucumber and mint cooler at Seven Lions is an appealing brunch refresher either served as is or spiked with spirits. “It is like a cucumber spa water crossed with a virgin mojito,” says Singh. “And it is perfect for sipping outside on the patio.”

Given the ongoing sales and traffic challenges in the restaurant industry, it is imperative for operators to attract additional guests and build revenue. One of the best ways is to promote the drawing power of on-trend specialty coffees, cold brews, flavored iced teas, artisan sodas and aguas frescas.