Sonic says its all-day breakfast ‘not material’ to sales

The Oklahoma City, Okla.-based company said Sonic’s offer of the entire menu, even at breakfast, has had more impact on its sales than offering breakfast all day.

Breakfast sales outside the morning daypart are “not material to our business at all,” Clifford Hudson, Sonic’s CEO, said in a conference call with analysts. The larger impact, he added, is that customers “order non-breakfast items in morning. That’s the bigger variable.”

Claudia San Pedro, Sonic’s chief financial officer, added that “what we’ve found with our consumer is that, what's important to them is to be able to have choices and flexibility.” She noted the bigger factor is that Sonic patrons are more likely to order a cheeseburger at breakfast than a breakfast item in a later daypart.

For the Aug. 31-ended fiscal year, Sonic broke its sales down by daypart: 12 percent in morning; 48 percent at lunch/dinner; 23 percent in the afternoon; and 18 percent after dinner. 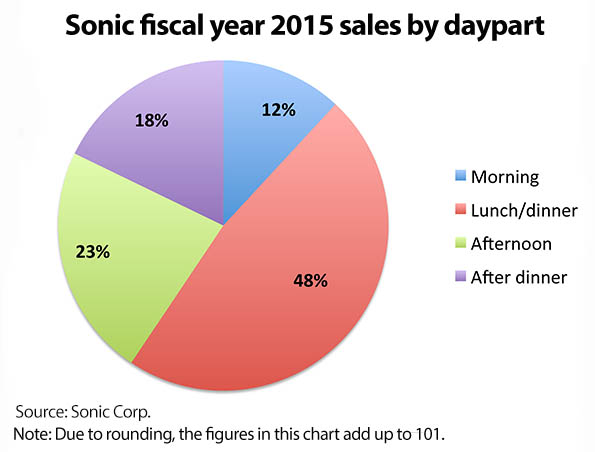 “We think we’ve got a product line and daypart strategy that allows us differentiation,” Hudson said. “Burger is not in our name and drinks are a big part of their business. So we’re able to hold different strings, focus on dayparts and product lines to keep our business momentum going and we’re doing so.”

The company, however, is preparing to make some quality improvements in its burgers in the next few months, San Pedro said, but she said the company expects commodity cost increases to be “benign.”

Sonic is not seeing significant wage rate inflation at its company stores, she added, and since last November has been making investments in personnel that provided improvements in employee turnover rates.

Systemwide same-store sales were up 4.9 percent in the fourth quarter and 7.3 percent for the fiscal year.

San Pedro noted: “What is especially nice about this performance is that it's been driven by a mix of traffic and check, and the growth has been balanced across all of our dayparts, which is in line with our multi-year strategy to achieve $1.5 million in average unit volume for our drive-ins.”

Update: Oct. 20 The headline was changed to clarify Sonic's statement on all-day breakfast.