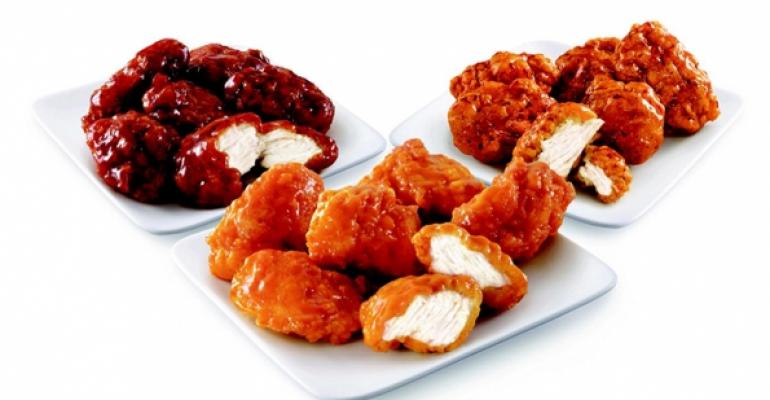 The Oklahoma City-based quick-service operator, which has 3,529 units, said that menu diversity also helps it appeal to Millennial customers.

J. Clifford Hudson, Sonic chairman, president and CEO, added that the promotion of boneless chicken wings, a new item that rolled out last year, was especially positive, “particularly on an evening during the week and in which we can use the momentum in our business, and we have minimal interference from our competition.”

The value messages will continue in the second quarter and the new year, Hudson said. This month, for example, Sonic is promoting “Two Can Eat for $9.99,” including two burgers or foot-long hot dogs, or one of each, plus two medium tater tots and drinks.

“That's again a focus on our products doing value in our way,” Hudson said. “In this case it would be a larger transaction, but good value for the consumer, avoiding just the approach to cheapness that some of our competition focuses on.”

Hudson also said the Sonic brand is finding a strong relationship with Millennials, in part because of its customization offerings, and also the physical differentiation of its restaurants, which typically have 25 drive-in stalls, so “every customer can be first in line when they come to Sonic.”

Hudson said CREST research from The NPD Group has indicated that Sonic draws a “a disproportionate share of Millennials in our business.” That bodes well for driving traffic in the future, he said.

San Pedro noted that Sonic is on track to achieve its multiyear goals of $1.5 million in average unit volumes for its drive-ins.

Hudson said the brand is also working to refine its smartphone app, which he said the company anticipates promoting more actively later in the fiscal year.

“The app is there and it exists, but it doesn’t exist in the state that we want,” Hudson said. “It will become more robust over time. But we anticipate later in the fiscal year beginning actual promotion of that on a very broad public basis and then hope, expectation, adaptation and utilization growing thereafter.”

Alexander Slagle, an analyst with Jefferies LLC, wrote in a note that Sonic’s “fundamental trends appear relatively solid,” despite pressures noted by other restaurant companies in the oil-production industry in Texas and Oklahoma, which are prime markets for Sonic.

At the end of the quarter, Sonic had 382 company-owned units and 3,147 franchised restaurants in 45 states.