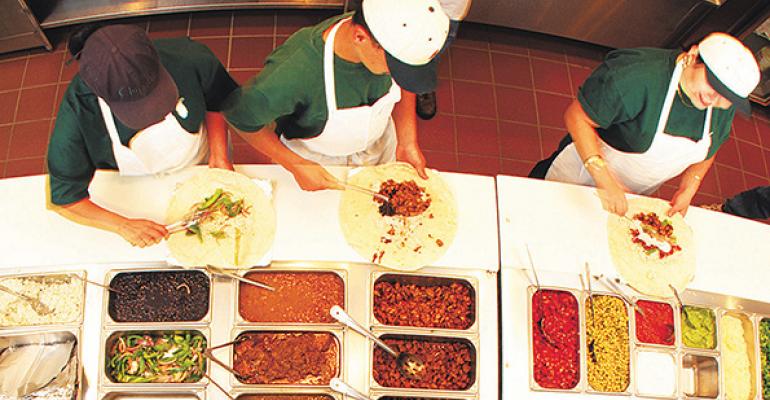 Ongoing reports of foodborne illness to cause additional headwinds

Chipotle Mexican Grill Inc. is likely to see a greater hit to same-store sales than previously projected after yet another round of E. coli infections was reported by the Centers for Disease Control and Prevention this week, Wall Street analysts said Tuesday.

The latest round included five illnesses reported in Kansas, North Dakota and Oklahoma. All five ate at one of two Chipotle restaurants the week before falling sick.

Earlier this month, Chipotle projected that fourth-quarter same-store sales would drop between 8 percent and 11 percent as a result of the crisis. That was before more than 140 people were sickened by norovirus tied to a Chipotle unit in Boston, and before the E. coli outbreak that began in the Pacific Northwest was expanded to include 53 people in nine states.

Chipotle’s stock price dipped below $500 on Tuesday for the first time in at least a year, to $498.48 in midday trading. Monday’s closing price of $522.01 was down 18 percent from the end of October, just before news hit of the E. coli outbreak that was initially reported in Washington and Oregon.

In reports Tuesday, however, analysts said Chipotle’s fourth-quarter same-store sales are likely to suffer even more as a result of the ongoing crisis.

He lowered his projections, saying Chipotle’s same-store sales for the quarter will fall 12 percent, a deeper slide than the 9.5-percent decline he had predicted earlier in the month.

“We still think the business ultimately will rebound and believe patient investors can be rewarded in owning CMG, but the lack of visibility related to the timing/trajectory of the recovery prevents us from taking a more constructive near-term stance on the stock at this stage,” he wrote.

Peter Saleh, with BTIG Equity Research, argued that Chipotle’s projection of same-store sales declines between 8 percent and 11 percent for the quarter implied a 10-percent to 20-percent decline for the month of December. Saleh warned that a decline of more than 20 percent for the month would cause Chipotle to miss the low end of its projected range.

Still, Saleh stuck with his projections that same-store sales would decline 10 percent for the quarter. He sees Chipotle as a buying opportunity for investors.

“While we are frustrated by the continued negative news flow regarding the E. coli outbreak, we believe the company has taken the appropriate steps to guard against future incidents,” he wrote. “We expect there could be some additional sales volatility following the most recent update but believe a pessimistic financial case is already largely reflected in the shares at the current price.”

Particularly troubling is the fact that the E. coli strain involved in the more recent outbreak appeared to have a different DNA fingerprint than the one to blame for a larger E. coli outbreak that began in the Pacific Northwest.

Both outbreaks involve rare, Shiga toxin-producing E. coli 026, or STEC 026, but the CDC is considering the outbreaks as separate events until more is known about whether the two strains are related.

Health officials have yet to identify the source of either E. coli outbreak.

In The New York Times on Monday, Dr. Ian Williams, chief of the CDC’s outbreak response and prevention branch, said one challenge has been “because of the way Chipotle does its record keeping, we have been unable to figure out what food is in common across all those restaurants.”

Chipotle noted on its website that none of the ingredients in restaurants today were present at the time customers became ill. The chain warned that more illnesses from similar time periods may be reported as they make their way through various local health agencies to federal health officials.

Chipotle has also detailed new, stricter food safety protocols being implemented across the nearly 2,000-unit system, with the goal of reducing the brand’s food safety risk to near-zero levels.

The new protocols include high-resolution testing of fresh produce, more controls on suppliers and vendors, and enhanced training for employees, as well as blanching some produce and using a central commissary kitchen to prepare ingredients for shipping to restaurants.

The protocols are expected to be implemented within the next four months, Chipotle said on its website.

Meanwhile, on social media, perhaps indicating the deep loyalty of Chipotle fans, sentiment appeared to be growing that Chipotle’s ongoing foodborne illness woes could be a result of industrial sabotage.

Surprised #Chipotle hasn't checked into industrial sabotage re E. coli, especially since they were so underhandedly attacked 4 GMO removal

CDC officials, however, said they have seen no evidence that might suggest industrial sabotage in their investigation.