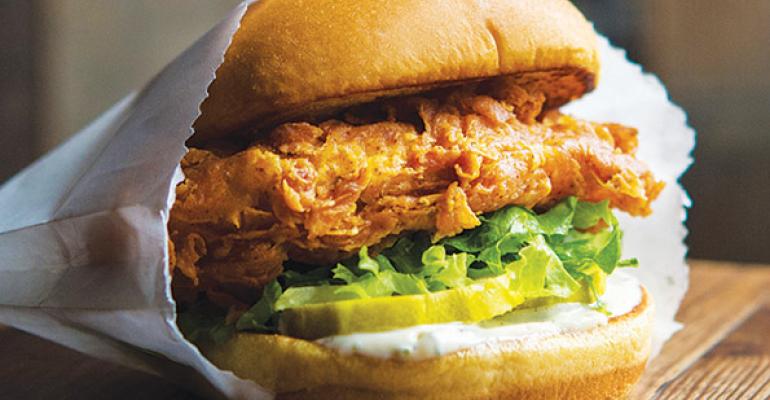 Now that Shake Shack’s chicken sandwich has become a “strong traffic driver,” the chain has its eye on another potential product: Breakfast.

The New York-based burger chain serves breakfast at six locations in transit centers around the world, including a recent test at its Fulton Center location in New York City.

“There are no plans today to expand it beyond those transit centers,” Garutti said. “But we’ve got our eyes on it. We’re learning it. We’re testing new products, and we’re having a lot of fun.”

Shake Shack has been steadily moving beyond its simple, burger-focused menu for much of the past year. The chain, which is about to open its 100th location, has generated strong unit volumes, but has been looking to maintain that momentum.

Garutti stressed that breakfast is “not our focus” today, and noted that with frozen custard, and beer and wine, the company has enough sales drivers to maintain average unit volumes of nearly $5 million.

“There may come a day, but it’s not something we’re focused on today,” he said of breakfast. “We want to focus on the heart of our business today, and that’s lunch and dinner.”

This year, Shake Shack added the Chick’n Shack sandwich to its menu, giving the chain a second protein. The sandwich represented 8.2 percent of total sales in the second quarter, Garutti said, and has become the third highest-selling item on its domestic menu.

“That’s an incredible behavioral shift,” Garutti said during the call. He added that it has “settled into a consistently strong position on our menu,” and is leading to a higher average check.

With the chicken sandwich on board, Shake Shack has returned to limited-time offers, including a Bacon Cheddar Shack in June and a Blueberry Pie Oh My concrete.

The new products are key for a chain that needs to generate same-store sales growth to satisfy Wall Street investors.

Shake Shack reported same-store sales growth of 4.5 percent in the second quarter ended June 29. That was a sizable slowdown from the 9.9-percent growth it reported in the first quarter, and the lowest same-store sales since the company’s January 2015 initial public offering.

Executives also said during the call that same-store sales would be in the “low single-digit” range for the rest of the year.

Investors pounced. The stock fell 7 percent on Thursday, even though the company increased its revenue outlook for the year and beat analyst expectations for earnings in the second quarter.

Garutti noted that Shake Shack’s same-store sales have risen 17.4 percent on a two-year basis. Still, he said, by focusing only on same-store sales, “You’d be missing the real story” of the chain’s average unit volumes and its operating margins.

“Across the country, in all types of formats and all levels of sales, Shake Shack continues to perform,” Garutti said.

Food and paper costs as a percentage of revenue fell 130 basis points in the quarter, to 28.1 percent. Beef costs, which have hit many chains in recent years, have declined 11 percent this year. Jeffrey Uttz, Shake Shack chief financial officer, said beef and dairy prices will remain lower for the remainder of the year.

The lower food costs come as the company has increased wages for its workers. This year, Shake Shack increased starting wages to between $10.50 and $12 an hour, while trainers make between $12 and $15. Yet even with that increase, labor costs as a percent of sales fell to 23.7 percent, from 24 percent.

Strong sales growth led to that decline, along with some lower expenses like medical claims, Uttz said.

Shake Shack is also adding more locations. Shake Shack has 53 domestic units, and is on track to add 18 locations this year due to “more favorable development tailwinds.”

The company plans to launch in new markets like Detroit and St. Louis in 2017. Shake Shack says it can operate 450 locations in the U.S. And it has no plans to do anything in the U.S. other than operate its own locations.

“We see that as company-operated restaurants,” Garutti said. “We have no desire to let anyone else license a restaurant in this country. We love our returns, and we want to keep them for ourselves.”