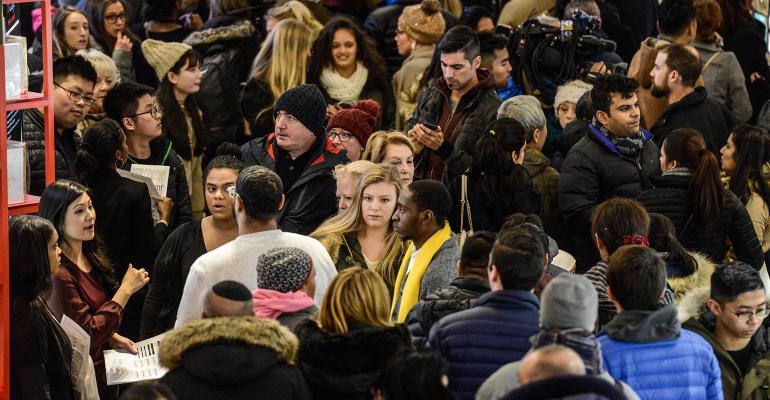 Restaurants, retail had a merry holiday season despite e-commerce growth

But outlook for January expected to be dampened by bomb cyclone

Consumers made merry with spending over the holiday season in both retail stores and restaurants, though online buying continued to grow at a faster pace than at brick-and-mortar stores.

Mastercard’s annual SpendingPulse report on retail spending overall between Nov. 1 and Dec. 24 saw an increase of 4.9 percent in dollars spent year-over-year across all payment types — cash, card and check. It was the largest increase since 2011 and an indication that consumer confidence is strong, Mastercard officials said.

Restaurant spending in December was up 3 percent year over year, according to the report, and that growth has remained positive since March 2010 as U.S. consumers continue to spend on experiences over things.

Restaurants also benefitted from the trend of gifting travel experiences, the report noted, as did airlines and hotels.

Online shopping, however, saw a gain of 18.1 percent during the 2017 holiday season compared with the prior year, continuing an ongoing trend. That increase in 2017 was boosted by a late-season rally just before Christmas, the Mastercard report said.

“Evolving consumer preferences continue to play out in the aisles and online sites of retailers across the U.S.,” said Sarah Quinlan, Mastercard’s senior vice president of Market Insights, in a statement. “Overall, this year was a big win for retail. The strong U.S. economy was a contributing factor, but we also have to recognize that retailers who tried new strategies to engage holiday shoppers were the beneficiaries of this sales increase.”

Separately, spending in casual-dining restaurants across the U.S. was up 8.21 percent in the four weeks between Black Friday and Christmas, said Atlanta-based Cardlytics, which also tracks purchase data across multiple payment methods.

Spending at quick-service restaurants also climbed during the period by 6.32 percent, Cardlytics said.

The week of Black Friday, which included Thanksgiving, was even better for casual-dining restaurants, where spending increased 9.16 percent, Cardlytics said.

Both brick-and-mortar retailers and restaurants likely also benefitted from relatively mild weather across the U.S. in December, a picture that is expected to change as a massive storm moved over the East Coast on Thursday.

Wall Street analysts in reports Thursday were already predicting the storm would hamper early January sales for some restaurant chains with locations in the Eastern U.S.

David Tarantino of Baird Equity Research, for example, predicted in a report that winter storm Grayson, also known as a “bomb cyclone,” is likely to dampen sales for restaurants from Georgia through the Mid-Atlantic and up to Maine.

“Restaurants in the path of the storm are likely to see fairly meaningful, temporary disruptions in sales this week,” he wrote, with chains like Dunkin’ Donuts, Zoe’s Kitchen, Potbelly, Darden Restaurants Inc. and The Cheesecake Factory likely to have the most exposure.

Still, 2017 was a rough year for retail stores as consumers continue to do more of their buying online. Retail Dive reported that nearly 7,000 physical retail stores closed last year, an increase of 229 percent over 2016.

Macy’s, for example, on Thursday announced plans to close 11 stores in early 2018 and another 19 are scheduled for closure, as part of a plan to close 100 locations that was announced in 2016. Including those locations, the retail chain will have closed 124 stores since 2015 in an effort to “ensure the optimal mix of brick-and-mortar stores and digital footprint,” the company said.

Those closures, however, could offer new opportunities for restaurants as mall operators shift their emphasis to food and experience-driven businesses to drive foot traffic.

Mall operator General Growth Properties, for example, has reportedly filed a plan to replace a Macy’s in the San Francisco Bay area with a mix of smaller retail stores, restaurants and a movie theater.

Where restaurants have traditionally tracked retail sales in part to attract hungry shoppers, now the tables are turning and retailers are looking to restaurants to bring those shoppers in.

Hakkasan’s high-end dim sum concept Yauatcha, for example, has drawn long lines at malls in Houston and Waikiki, he said, and the group also plans to grow its Herringbone restaurant concept in mall locations.

“In my book, malls have become more social hubs,” he said. “People don’t really go to malls to buy clothing and apparel. They look at it and test it, but they buy it online.”

Now restaurants are becoming anchors, filling up malls at night. Certain fashion brands are looking to align themselves with certain restaurant brands to attract a targeted demographic, he added.

“We will definitely look at malls more and more,” he said. “It makes malls a destination for something other than 9 to 5.”