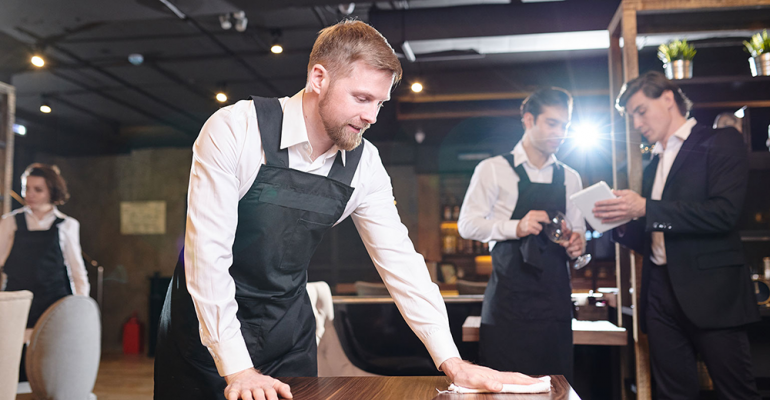 These insights come from TDn2K’s Black Box Intelligence™ data, based on weekly sales from restaurant chains representing more than 31,000 locations, more than 170 brands and nearly $72 billion in annual sales.

“Winter months are tricky to report on due to the noise in the data coming from weather and the potential effect of holiday shifts,” said Victor Fernandez, vice president of insights and knowledge for TDn2K. “However, it is hard not to remain optimistic about the relative strength of restaurant performance, especially when looking at sales growth over a longer time period. January’s same-store sales growth compared with January 2017 was 1.3 percent. Industry two-year sales growth has now been positive for the past four months, after more than two years of declining growth.”

A recent report by TDn2K revealed that the average restaurant location lost almost one of every 10 restaurant visits in the last five years. That study, released to members at TDn2K Global Best Practices Conference in January, analyzed the Black Box Intelligence traffic for existing chain restaurant locations from 2013 to 2018.

But that doesn’t tell the whole story, which looks quite different when factoring in the traffic of these newly opened restaurants. Total traffic growth for chain restaurants was actually positive in the last five years.

In other words, consumers are not moving away from chain restaurants; in fact the opposite is true. The reality is that the net growth in new restaurants opened during the period outpaced population growth. Restaurant visits are diluted over a larger base, which translates into same-store traffic falling on average. Additional studies by TDn2K revealed that despite the industry’s same-store traffic woes, best in class performing restaurant brands are driving positive traffic consistently.

Consumer spending looks be relatively unaffected by recent economic and political turmoil and is expected to continue to grow at a moderate pace, TDn2K research indicates.

“In the span of just two months, we went from stock market meltdowns to government shutdowns,” said Joel Naroff, president of Naroff Economic Advisors and TDn2K economist. “Yet despite all the chaos, the economy keeps moving forward. Job growth remains solid and while consumer confidence was hit hard by the Washington political games, the decline is not expected to slow household spending significantly. Ultimately, people determine their consumption levels based on their incomes. Given that the rise in wages should accelerate as the labor markets tighten further, spending on discretionary items, including restaurants, should hold up quite well.”

“The only major issue overhanging the economy is the potential for a full-fledged trade war. More than likely an agreement that is more puff than pastry will be the outcome. Once that hurdle is cleared, the economy and consumer spending should expand at a moderate pace the remainder of the year.”

January sales were strong across segments

Sales performance was strong across the entire industry for the last two months. All industry segments posted positive same-store sales growth in December and January, the only time this has occurred in the last three years.

The best performing segment based on same-store sales during January was fine dining, undoubtedly assisted by a shift in the New Year’s Eve holiday, which fell into the first week of the year in 2019. Conversely, this segment was among the worst performers in December, as the effect of this holiday shift worked against them. Other top performing segments during January were quick service and family dining.

But weather impacted sales in large sections of the country. Severe winter storms were a factor in four out of the five regions of the country with the lowest same-store sales during January, ranging from an increase of 0.1 to and decline of 0.5 percent. New England, New York-New Jersey, the Midwest and Mid-Atlantic all reported same-store sales growth worse than -5.0 percent during the third week of the month, as winter storms kept some consumers from dining out.

Operators also face ongoing staffing headaches. The staffing crisis being experienced in the restaurant industry is making it close to impossible for brands other than those at the highest level of performance to deliver on the service levels they aim to provide. And that inability to provide consistently high levels of service can have far-reaching consequences: According to TDn2K analysis based on data from White Box Social Intelligence™, superior service is a common trait among top-performing brands in the marketplace.

There are many factors contributing to restaurant operators’ increased staffing headaches.

The industry continues to expand, placing a lot of pressure on those people responsible for keeping restaurants fully staffed. Year-over-year growth in restaurant jobs was 2.4 percent in December according to TDn2K’s People Report™.

Poor employee retention continues to be the other roadblock for restaurant service. People Report analysis shows turnover for both hourly employees and restaurant managers increased again in December. Turnover rates remain at historically high levels, which translates to large portions of the industry’s employee base being short-tenured, not fully trained and unengaged in their jobs.

For chain restaurants trying to win the share of stomach battle, this situation is not ideal. Poor retention makes it more challenging for operators to provide guests a superior experience that keeps them coming back.