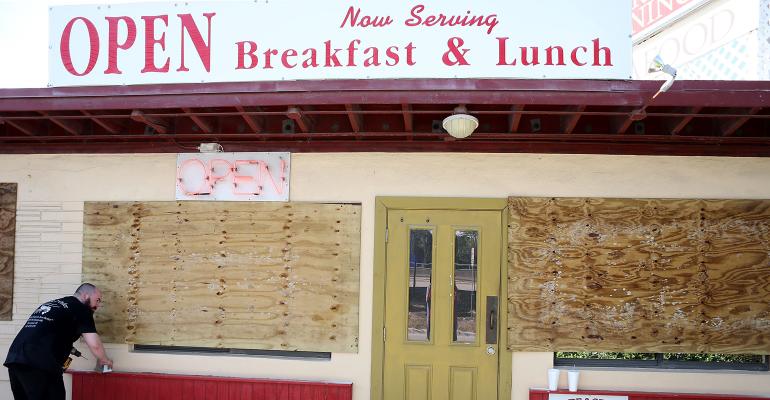 Powerful Irma could have a big impact on restaurants

Blog: Another major storm could temporarily hit sales and the economy

Hurricane Irma, one of the most powerful hurricanes in recorded history, is barreling toward Florida and the U.S. East Coast with maximum sustained winds of 175 miles per hour.

It would be the second major hurricane to hit the U.S. mainland this season, following the devastating blow Hurricane Harvey dealt to South Texas late last month.

Irma, like Harvey, has the potential to impact the restaurant industry, by forcing locations to close for days and driving people from their homes in mass evacuations — not to mention the potential damage such storms can cause to the restaurants themselves.

Florida is the country’s third most populous state, with an estimated population of more than 20 million. It’s also a huge restaurant market. Subway, for instance, has more than 1,500 locations in the state. McDonald’s Corp. and Dunkin’ Donuts each have nearly 900 in Florida and Puerto Rico. Starbucks Corp. has 700 locations there.

On a percentage basis, however, Fiesta Restaurant Group Inc. operates 37 percent of its locations in Florida and Puerto Rico, thanks to the heavy presence of its Pollo Tropical brand there, according to Piper Jaffray Analyst Nicole Miller Regan.

What kind of impact the storm could have will depend on the track and its duration. Parts of Florida are already being evacuated and a Hurricane Watch has been declared for the Florida Keys and South Florida. Florida Gov. Rick Scott on Thursday mobilized the National Guard to help with hurricane preparedness.

But the National Weather Service said on Thursday that the chance a direct hit could take place in Georgia and the Carolinas is increasing.

“Any restaurants in the path of the storm are likely to see fairly meaningful, temporary disruptions,” Baird Analyst David Tarantino wrote in a note this week.

“We believe Irma is likely to hurt restaurant traffic through much of the upcoming weekend into the early part of the work week,” Maxim Group Analyst Stephen Anderson wrote in a note on Wednesday.

He said the storm has the potential to reduce same-store sales at some restaurant chains by as much as 100 basis points.

To be sure, such storms are temporary, and as we wrote about before, sales quickly recover as construction workers, insurance adjusters and disaster cleanup crews descend on an area.

“There is a possibility that some restaurants, particularly in the quick-service and fast casual segments, could see pent-up demand several days after the storm,” Anderson wrote.

The bigger question, however, could be the combined impact of Harvey, a catastrophic flood event that hammered a major city on the Gulf Coast, and Irma, a potentially devastating storm that could hit populous areas on the Southeast Coast.

As it is, Harvey had a major impact on some brands. Credit Suisse Analyst Jason West estimated that Harvey would hurt McDonald’s Corp. same-store sales by 30 basis points in the current quarter.

Harvey was already expected to have an impact on the overall economy, given the importance of the Gulf region. The Institute for Supply Management said on Thursday that “Harvey is a disaster that will impact the U.S. economy far beyond that of the Gulf Coast.”

Then there are gas prices. The shutdown of refineries in Texas has hurt the supply of gasoline and has driven up prices in recent days. The price of a gallon of gas was $2.67 on Thursday, up 22 cents over the past week and up 33 cents over the past month.

While that doesn’t seem like much, it could have an impact on consumers’ psyche and might cause them to pull back. That’s especially true if those prices keep increasing.

“We believe short-term spikes or a breach of the $3 per gallon psychological threshold could have a short-term impact on restaurant visitation and spending habits,” BTIG Analyst Peter Saleh wrote.