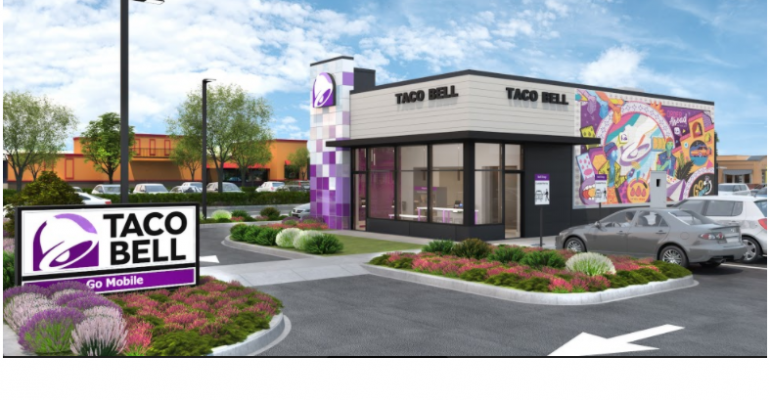 In the works for a few years, the smaller footprint stores are designed for contactless carryout; But are Cantinas and fast social designs out? A Taco Bell executive gives us the lowdown.

In early March, Taco Bell announced a bold plan to open ‘fast social’ restaurants with stadium-style seating for gamers. But those dine-in-focused lifestyle stores have been put on pause as the brand transitions to a smaller footprint store that caters to on-the-go consumers looking for double drive-thrus and curbside pickup.

The new format store, dubbed “Taco Bell Go Mobile,” has been in the works for three to four years but was accelerated due to the pandemic, said Mike Grams, Taco Bell president and global chief operating officer.

“I think the COVID environment has just accelerated those customer insights and needs,” he told Nation’s Restaurant News during a phone interview. “It's really clear what the consumer wants from us.”

And, that format is one that involves less friction with mobile orders, and better and faster -- and now safer -- ways to pick up food.

One key feature of the Go Mobile format, which is months away from debuting, is dual drive-through lanes. One lane will be a traditional quick-service drive-thru lane, where customers order, pay and get their food. But, the second lane is a “priority” lane geared for picking up mobile orders, similar to mobile pick-up lanes by Chipotle Mexican Grill and Noodles & Company. 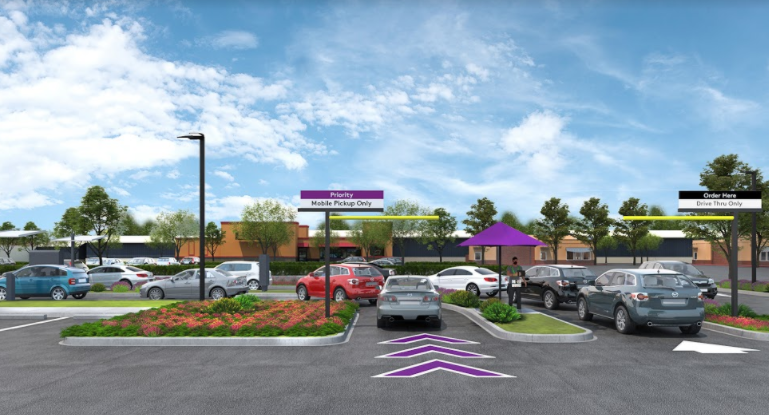 One of two drive-thru lanes at the Taco Bell Go Mobile store will be a priority lane for digital orders.

“The priority lane is created for the emergence of digital demands -- the  ability to put the customer experience in their hands [where they can] order before they get to the parking lot,” he said.

The move comes as chains across the U.S. are turning their mobile apps into one-stop ordering hubs for their brands. Many are layering the app with multiple functions, including integrating a rewards program, offering scheduled pickup and direct delivery. Eventually, Taco Bell’s app, which recently debuted a new loyalty program, will offer rapid reorder and reward points for customers who visit Go Mobile stores.

The first stores, aimed for new builds, won’t open until early next year.  Some franchise locations will also get retrofits.

Grams said the Go Mobile format will likely be smaller, at about 1,400 square feet, as these stores will have less of a dine-in focus. Most Taco Bell restaurants are about 2,000 square feet.

The chain, which has opened about 1,000 stores over the last five years, is not moving away from its urban in-line stores such as the Cantina format.

“That won't change. That will continue,” Grams said.

The Go Mobile and Cantinas are part of the brand’s plan to design and build “flexible format” restaurants that meet the needs of customers in specific trade areas.

Part of that plan was to open a “fast social” restaurant in California that was outfitted with stadium-style seating for gaming fans. But that format, announced only a few weeks before stay at home orders began sweeping the nation in mid-March, is on pause for now.

“It's still on the table, but it's not a priority right now,” Grams said. “Right now we've really put our efforts on to the total mobile experience.”

That format is "becoming a staple going forward. We believe that'll live on," Grams said.

Taco Bell is also using “smart” technology in the kitchen to determine when a mobile customer has entered the parking lot. At that point, the app will send a customer a message to let them know which access point is the best and fastest option for picking up their food: curbside, carryout or the express lane.

“The eventual experience is when you pull on the lot, we want to be able to guide and direct you to the best experience whether that's through the priority pickup lane, curbside, or coming into the restaurant,” he said.

The idea is the kitchen technology, acting like a traffic controller, would be able to guide the customer to the best pickup experience, Grams said.

That’s another reason why Taco Bell recently trimmed its menus to reduce complexity in the kitchen. But, also to make room for a new pipeline of foods.

“We've got a really good pipeline of great products and innovation that will be coming onto the menu,” he said.

By reducing the menu, and adding new items, Grams said Taco Bell can provide a better experience for customers, as well.

“What we don't want to do is just continue to expand our menu beyond our capability,” he said.