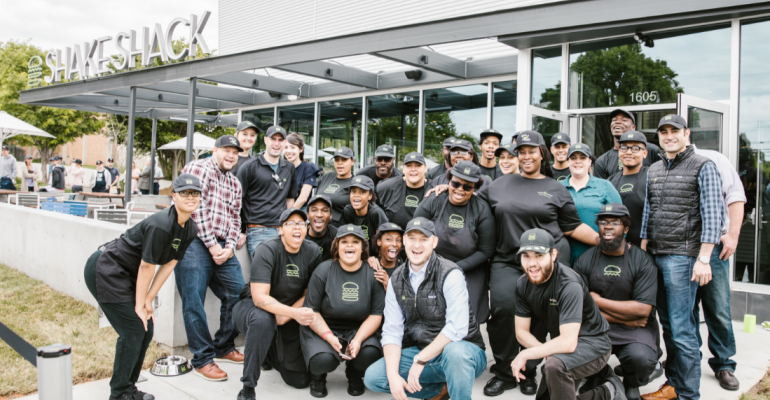 The move comes as the chain ends the 10% premium pay it had been giving hourly workers since the peak of the pandemic in April.

Shake Shack, which recently ended a 10% bonus pay program for hourly workers, will be giving year-end bonuses to all employees ranging from $250 to $400, the company announced Thursday.

The move to reward all workers at the end of the year comes as the New York City-based chain ends the 10% premium pay it had been giving hourly workers since the peak of the pandemic in April. That program, which impacted more than 6,000 employees, ended Aug. 19, the company said.

As a continued “thank you to our teams,” Shake Shack said it will be giving  team members year-end bonuses. Bonus amounts will be based on the position held, the company said.

The company, which has struggled during the pandemic as many of its restaurants are located in deserted tourist locations, said it will also be guaranteeing bonus payments to all managers through the next two quarters (Q3 and Q4).

Shake Shack is known for offering its employees good benefits, and typically pays above minimum wage at most of its restaurants.

The bonus boost at the onset of the pandemic was "first and foremost" a thank you to the "incredible work" and grit employees have shown duing the pandemic.

But chain officials acknowledged that the appreciation pay also did help retain employees, which became a problem for many restaurants as they tried to re-hire workers when dining restrictions eased in various states.

"Taking care of our teams has always been a core tenet of Shake Shack - we couldn’t do this without them. Additionally, we do believe it [the pay boost] helped retain employees," the company told Nation's Restaurant News.

In its latest earnings call, Shake Shack said it plans to add the company’s first ever restaurant with a drive-thru as part of a strategy to diversify the format of its stores.

The brand also plans to modify restaurants to include drive-up lanes and walk-up windows to accommodate mobile orders.

In the second quarter, the chain experienced a 49% drop in same stores sales.