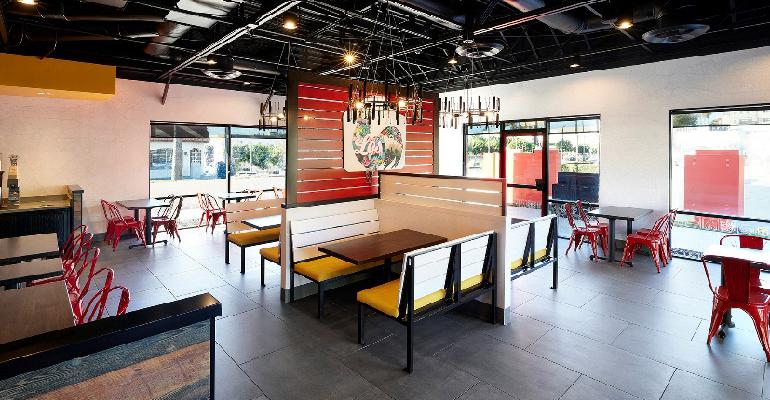 El Pollo Loco Inc. has completed the first three remodels of existing units into its new “restaurant of the future” design, the company said Tuesday.

The Costa Mesa, Calif.-based grilled chicken brand said the first three restaurants — two in Los Angeles and one in Las Vegs, Nev. — will provide a template for as many as 300 refreshed units systemwide.

“To compete in a COVID and post-COVID world, we knew we needed to create a unique concept that is anchored in technology, accessibility and modern design elements infusing our brand history to make it easier and more rewarding to be a customer,” said Bernard Acoca, El Pollo Loco CEO, in a statement.

“We’re incredibly excited to have remodeled our first few restaurants so soon after announcing the prototypes and now look forward to ushering in a new era of El Pollo Loco expansion with our L.A. Mex asset design,” Acoca said. The company announced the remodel plans late last year.

The company said the renovations, sped up by consumer moves to a digital-based and contactless experience during the COVID-19 pandemic, feature “a modern interpretation of the brand’s heritage and strengths, including iconography distinct to Los Angeles and the El Pollo Loco L.A. Mex brand.”

The exteriors of the renovated restaurants feature a “Fire Tower” that relates to the brand’s flame-grilled chicken.

El Pollo Loco redesigned its patios to provide greater comfort for guests who wish to dine outside.

The brand has added global-positioning-system-enabled curbside pick-up and has amplified delivery and in-restaurant order pick-up with a new dedicated Pollo To Go digital order pick-up area.

Other design touches include wall murals to communicate the brand’s

“L.A. Mex” cuisine, pendant lights in the dining room made from the forks that grill masters use to cook the chicken and entry door pulls shaped to resemble the cleaver that cuts the freshly cooked chicken.