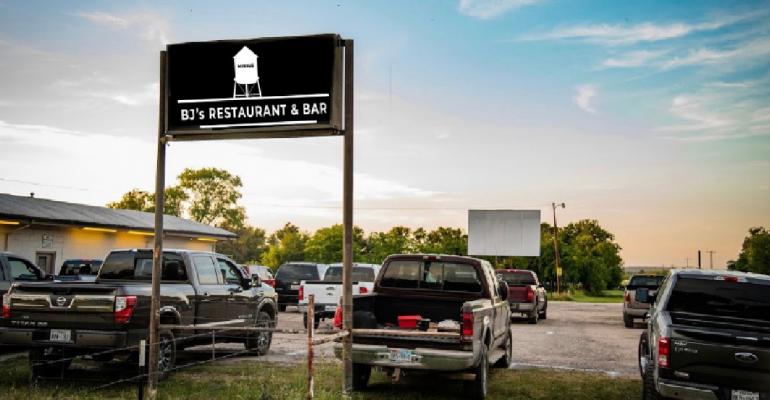 In San Francisco, Mayor London Breed recently announced that restaurants could offer outdoor dining, starting June 15 as part of a “Shared Spaces” program that would allow restaurants to set up tables on sidewalks, streets, parks and plazas with a permit.
Coronavirus>Restaurants Ready

Restaurants take it to the streets, parking lots and sidewalks to make up for limited capacity in their dining rooms

In states and cities where the lifting of dine-in restrictions is still potentially weeks away, outdoor dining has increasingly become a bridge solution for full-service restaurants.

Perhaps spurred by growing evidence that the coronavirus that causes COVID-19 does not spread as easily outdoors in fresh air, some states — including Minnesota, Maryland, Ohio, Illinois, Rhode Island, New Hampshire and others — have either limited full-service restaurants to al fresco dining only or specifically encouraged restaurants to serve guests outdoors in their reopening plans.

And municipalities across the country have relaxed rules on outdoor dining to allow for tables to be set up in parking lots or on public spaces such as sidewalks, streets and greenways — though social distancing and other COVID-19-related safety rules still apply.

In San Francisco, for example, Mayor London Breed recently announced that restaurants could offer outdoor dining, starting June 15 as part of a “Shared Spaces” program that would allow restaurants to set up tables on sidewalks, streets, parks and plazas with a permit. Indoor dining is not scheduled to be allowed until July 13.

In Chicago, Mayor Lori Lightfoot reportedly unveiled six streets in different neighborhoods that would be shut down in a pilot to allow restaurants to set up tables for outside dining.

New York City lawmakers are also reportedly moving ahead with a plan to allow the Department of Transportation to identify sites for outdoor dining, as well as giving restaurants temporary permits at no cost.

In Florida, where restaurant dine-in is limited to 50% capacity, West Palm Beach has city agencies collaborating on a program that would allow various streets, parking lots and alleyways to be turned into open-air cafes. The city program would provide funding for furnishings, any required leases and management help, including adding trash cans and hand-sanitizing areas. 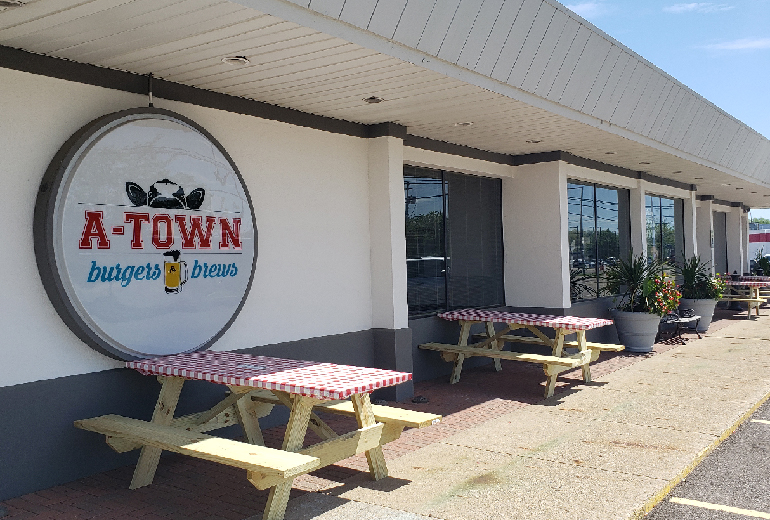 Frank Minear, owner of A-Town Burgers & Brews in Alliance, Ohio, had been open less than a year when the pandemic shut down restaurant dining in that state. He recently got clearance from the city’s planning commission to set up tables on the sidewalk alongside his restaurant to compensate for seating lost inside due to social distancing requirements.

“We explained that we lost six tables in the dining area, and we would like to be able to seat six tables outside to recoup the 24 customers every 45 minutes we would be losing due to the social distancing and spacing in the dining room,” Minear said.

The city granted the restaurant a temporary permit for outdoor dining on the sidewalk area around the restaurant, on the condition that it place barriers between the parking area and the sidewalk to protect diners from cars. The restaurant must also adhere to the same social distancing requirements that are required for inside dining.

“I am sure it’s going to be a slow start in the beginning, but I think once people see that we are open, they will start coming back in,” Minear told NRN just minutes before the first customers were seated. 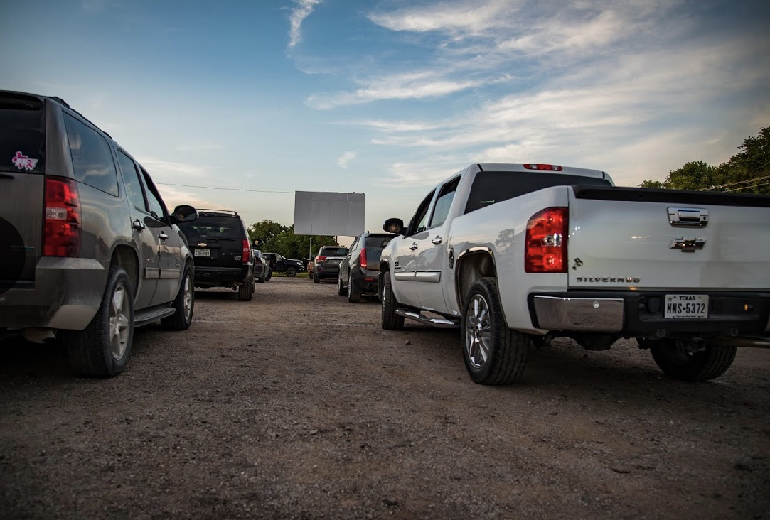 Dinner and a movie

The call of the outdoors also beckoned Marissa Marmolejos, who owns BJ’s Restaurant & Bar in Mingus, Texas. On a family vacation to the Galveston, Texas, area when restaurants began closing in the early days of the pandemic, Marmolejos and her husband brainstormed ideas to keep their restaurant open.

They decided that with many families cooped up inside all day, the community needed a safe way to get out of the house and enjoy some entertainment. Within about four days, they had built an outdoor movie screen and turned their parking lot into a drive-in theater, complete with dining service from the restaurant.

“People can call or text their order from inside the car, and we bring it out, just like a carhop,” said Marmolejos.

Customers can also call and order dinner ahead of the movie. The full menu is available, although BJ’s has promoted a scaled-down version featuring snacks and pizza for the movie showings. The restaurant hosts the movie events every Friday and Saturday night, at a price of $10 per car, which Marmolejos said generates enough revenues to cover the cost of licensing the movie.

Given the lack of red tape in small-town Texas — Mingus has a population of about 200 — BJ’s easily obtained permission for the drive-in from both the city and county. However, local authorities did request some modifications after customers got a little too close during the debut screening.

“The first night we had everybody packed in there,” Marmolejos explained. “So we talked to the county judge, and they said as long as the cars are spaced six feet apart, they were OK with us doing it.”

The parking lot only has room for 24 cars with the distancing requirements, but BJ’s has been able to accommodate as many as 40 cars by lining them up along a side street that has a view of the screen.

Marmolejos said she’d like to continue the movie screenings, although she’s not sure if it will be feasible once restaurants are permitted to open at full capacity. Texas began allowing dining rooms to open at 25% capacity in early May and expanded the limit to 50% capacity two weeks later.

“There have been a lot of people who want us to continue doing the movie, but our parking lot is so small, I don’t think the logistics work for us to be able to do both,” she said. 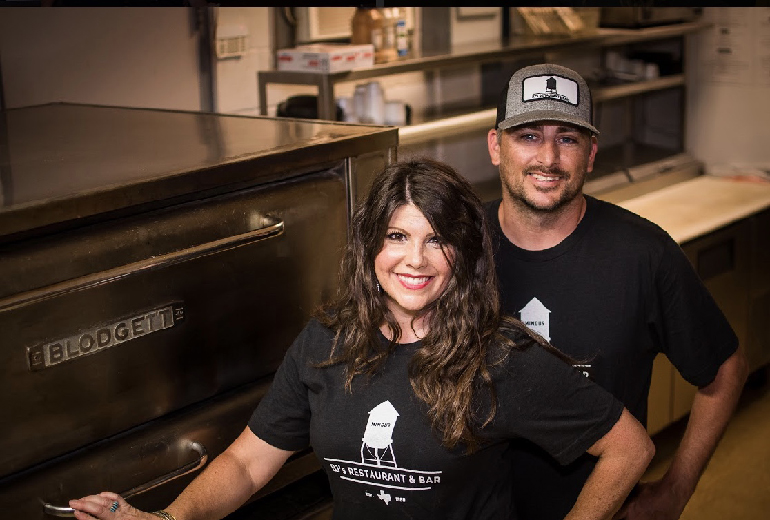 In Georgia, which was one of the first states to allow restaurants to reopen in late April, some operators have found that customers now prefer to sit outside.

“The outside dining is what people are going for,” said Ted Lescher, general manager of Lucky’s Burger and Brew in Roswell, which has an outdoor patio and a large yard that has been converted into a dining area with the addition of some widely spaced picnic tables. “Normally, people fill up the inside, then they go outside. Now it’s just the opposite.”

The outside space, called the Doghouse, had previously been used for the restaurant’s large anniversary and St. Patrick’s Day celebrations.

Some in the industry, however, do not see outdoor dining as a viable solution, saying rain could force everyone inside and wipe out any potential for social distancing.

In a series of Tweets, Eric Rivera, chef/owner of Addo in Seattle, called attention to this and other pandemic-related hazards, including the challenge of customers going back forth into the restaurant to use the restrooms, and the use of elevators to access rooftop dining.

“I've had restaurants that have had outdoor seating,” he posted. “You know what happens if it becomes windy or starts raining out of nowhere? They come inside, want their stuff packaged to leave, and/or want a refund.”

While his experience might be a direct result of his location in the Pacific Northwest, operators say they are willing to abide by social distancing requirements and risk the potential loss of business if their outdoor dining gets rained out. Others have invested in umbrellas and party tents to shield their diners from the elements.

“If it’s raining, no one will sit out there,” said Minear of A-Town Burgers & Brew, whose outdoor tables are protected from direct sun by the roof overhang, but would likely not be shielded in a downpour.