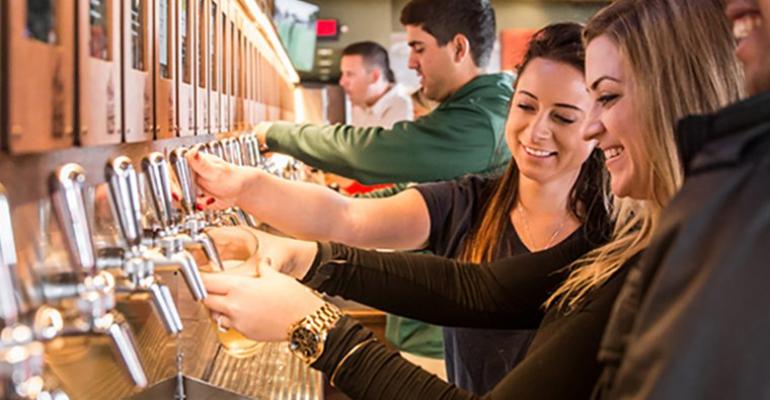 In 2015, Mongoven was living in London when he reached out to his lifelong friend and got into business with her, franchising the brand and changing the name to Smokin’ Oak Wood Fired Pizza.

Franchising seemed like a great option for what was now Smokin’ Oak because it had a “great menu, a great following, but also importantly, a really great operational system, a good business system, and a great bottom line,’ Mongoven told Nation’s Restaurant News.

The first franchise location was signed in 2016 and opened in 2017 in Ames, Iowa, and from there, Black and Mongoven, who now serves as CEO and co-founder, were off to the races.

Smokin’ Oak will close 2022 with 10 units. Since that first franchised location, units have opened all over the place, from Colorado to Florida to Texas, but Mongoven says that’s table stakes for getting into a business on the ground level when you can still interact with the founders directly.

“You go where you have great franchisees who are as passionate about the brand as you are and want to grow in their community,” he said. “And I think there are certain people who love working with an emerging brand because they're working with the founders. They're getting in very early. But what that means is sometimes yeah, you're scattered.”

The restaurant itself features an open plan, typical for fast-casual dining. Customers can watch their pizza get made in front of them; it takes about 90-120 seconds.

“We are pushing out dough as soon as the customer walks in because more than likely they're there for pizza,” he said.

What’s not typical for fast casual is the taproom that exists in two of the current units and all the new builds for 2022. The taproom wall is a self-serve wall of taps that serves between 20 and 50 different drinks.

At Smokin’ Oak’s Omaha, Neb., location, around 20% of visitors stop by solely to try out the taproom wall, according to the company.

Enabled with RFID scanning capabilities, the taproom serves beer, wine, ciders, and mixed drinks all at the tap of a wrist — and with no bartender.

Guests’ licenses are scanned upon arrival if they choose to use the taproom and they are given a RFID bracelet that is linked to their check. They simply scan at each tap, decide how many ounces of each drink they’d like ­— the drinks are priced per ounce to allow guests to sample flavors — and voila: self-poured drinks with little service involved. There are one to two people always watching the bar area, but neither of them need to have the skills of a bartender.

The taproom increases the size of each build, however, from around 2,000 square feet for a traditional Smokin’ Oak to 3,000-5,000 with a taproom. But Mongoven says it’s worth it in the long run.

“All the time we get requests for parties,” he said. “We wouldn't normally have that a couple of years ago but suddenly [we are] with the tap room, because they're larger places, but also you have the experience.”

Mongoven is working with his team on how to define this fast-casual experiential dining model in the industry.

“Honestly, we're trying to find a name for this category,” he said. “And I think we just may have to just define it ourselves.”