/sites/all/themes/penton_subtheme_nrn/images/logos/footer.png
Recent
Recent
5 food and beverage innovations at the restaurant show
May 25, 2022
NRN editors discuss single-seat cars, lessons learned during the pandemic, industry resiliency during Day 3 of the National Restaurant Association Show
May 24, 2022
Sustainability takes the spotlight at the 2022 restaurant show
May 24, 2022
Eight interesting foods at the National Restaurant Show that were not plant-based protein
May 24, 2022
T2D Concepts develops revolutionary franchise model in Roots Chicken Shak
May 24, 2022
Featured
Tech Tracker: Toast launches POS solution for quick-service restaurants
May 17, 2022
Meet 4 emerging NYC concepts
May 16, 2022
Memphis Seoul brings Korean BBQ and Southern cooking to Brooklyn
May 11, 2022
Executives on the move: 13 restaurant leaders with new positions in April
May 03, 2022
Tours
brought to you by 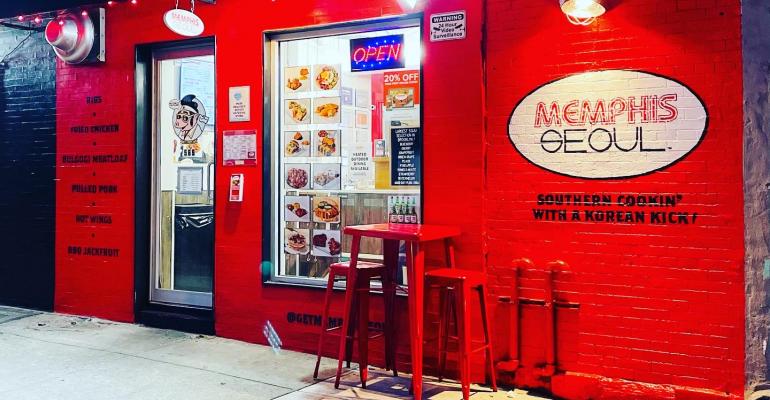 Meet this restaurant looking to grow in our Restauratour series

Memphis Seoul markets itself as serving Southern food with a Korean kick, and with dishes like ramen mac n’ cheese and Korean cornbread, it’s living up to that promise.

The Brooklyn restaurant is looking to expand into Manhattan later this year, according to operations manager Richard Blue, who spoke with Nation’s Restaurant News for our Restauratour series.

“We’re hoping to expand to a few more locations in Manhattan — East side, West side, Upper East Side, Upper West Side. We’re still in the process of figuring that all out,” he said.

Blue recommends the Korean BBQ Meatloaf for any newcomers to the concept. The Southern-style meatloaf is infused with Korean bulgogi marinade and drizzled with the chain’s signature Seoul Sauce. He recommends it with a side of ramen mac n’ cheese and Korean cornbread for the full experience.

Get to know more about Memphis Seoul here.