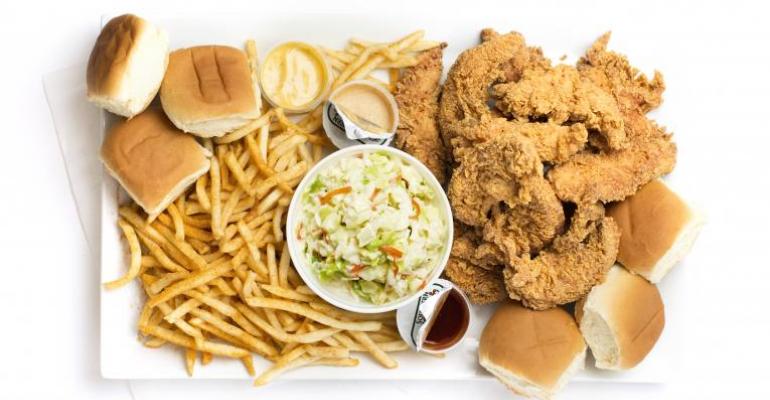 Ever heard the joke about the lawyer getting into the business of fried chicken?

There isn’t one, but if there was, Tom O’Keefe would know it well. He is that lawyer.

O’Keefe was a practicing lawyer at a big firm when he was hired to work as legal counsel at Al Copeland Enterprises. Copeland, better known as the founder of Popeyes Louisiana Kitchen, had already acquired Church’s Chicken by the time he brought on O’Keefe.

O’Keefe moved up through the ranks of Popeyes system, eventually becoming in-house counsel there before moving to Ruth's Chris then Smoothie King, where he would be named president and chief operating officer in 2013. He left the company in 2017 when it moved to Dallas.

“I've done a lot of moving in my life, and I don't want to move anymore,” he told Nation’s Restaurant News.

So how did O’Keefe get back into fried chicken after winding up in the smoothie game? He started a franchise law practice and one of the first people referred to him was family-run fast-casual Southern Classic Chicken, which was hovering at 16 units.

Shreveport, La.-based Southern Classic Chicken serves up home-style fried chicken complemented by fresh side offerings inspired by its southern roots. The family-focused brand is well-known across Northern Louisiana for its fried chicken and value pricing where an average meal ranges from $5 to $7. Sourcing the freshest ingredients and products possible is the top priority so the brand can provide the “absolute best” to its customers at a better price point and value than competitors.

It was founded in 1989 – the same year O’Keefe went to work for Popeyes.

In the end, Southern Classic Chicken checked every box on O’Keefe’s very specific franchisor list from over 40 years of experience, and he decided they were the group he was going to move forward as managing director.

“I have to believe in first the people and you know, who they are, what they stand for, how they conduct themselves in business and otherwise, then I look for the product,” he said, describing his list. “I look for the viability and legs of the product. I look at the potential for scalability. I look at unit level economics. I look at price value relationship. And when I examined the business, he checked every box has all the elements that made it you know, just pure really ripe for franchising.”

These franchisees must live up to a lot because O’Keefe is planning on bringing at least 15 new locations to a 50–100-mile radius around Shreveport, La., along with a few other business partners.

The locations will be owned and operated by SCC Foods, LLC and Ikonik Restaurant Brands, LLC.  The principals behind them include David Halpern, Nick Binnings, Glen Armantrout, and Casey Levy along with O’Keefe.

“This development deal is particularly special for Tom and me,” said Binnings, director of brand development for Southern Classic Chicken, in a release. “As members of the Southern Classic Chicken leadership team, we are thrilled to make the transition to becoming franchise partners. We believe that working alongside our franchisees and having a close relationship with the brand’s founding family has provided us with the right ingredients to enable our new locations to thrive.”

Binnings held an executive position at Another Broken Egg Cafe and helps several growth brands through his company Hammock Capital, while O’Keefe has held executive positions at Ruth’s Chris Steak House and other brands, in addition to Popeyes, Church’s and Smoothie King.

“Considering their backgrounds, we have no doubt that David, Nick, Tom, Glen, and Casey will successfully integrate Southern Classic Chicken into new communities,” noted Alan Fanning, a member of the founding family of Southern Classic Chicken, in a release. “We couldn’t think of a better team to help us expand our presence in our home state of Louisiana.”