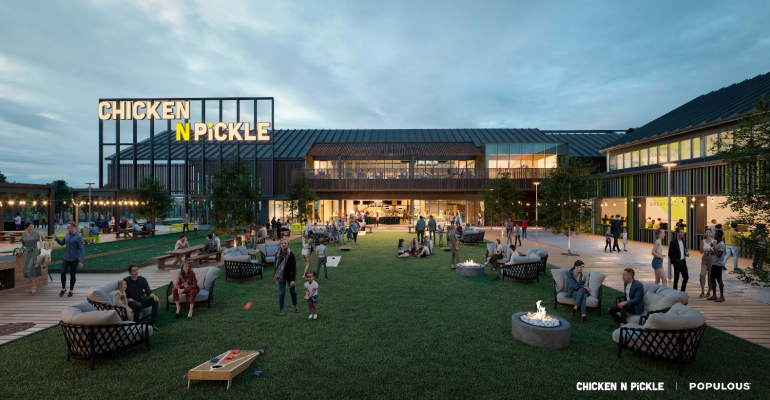 The new design, created with the Kansas City office of global firm Populous, will highlight the farm-to-table nature of the menu, said Mason Paoli, principal at Populous.
News>Regional Chains

Marrying a broad menu that highlights chicken with the growing popularity of pickleball, Chicken N Pickle has reimagined its design and plans to open the first prototype later this year, executives said.

The new design, created with the Kansas City office of global firm Populous, will highlight the farm-to-table nature of the menu, said Mason Paoli, principal at Populous.

The menu features quarter roasted chickens for $9 and half chickens for $13 with seasoning and sauce options as well as barbecued pork for $12, sandwiches from $12.50 to $13.50 and salads $10 to $14.95. Desserts, which are for two to three people, range from churro waffle to coconut cream pie cup and are priced at $8.50.

Hours are 8 a.m. daily to 11pm weeknights and midnight on Friday and Saturday. 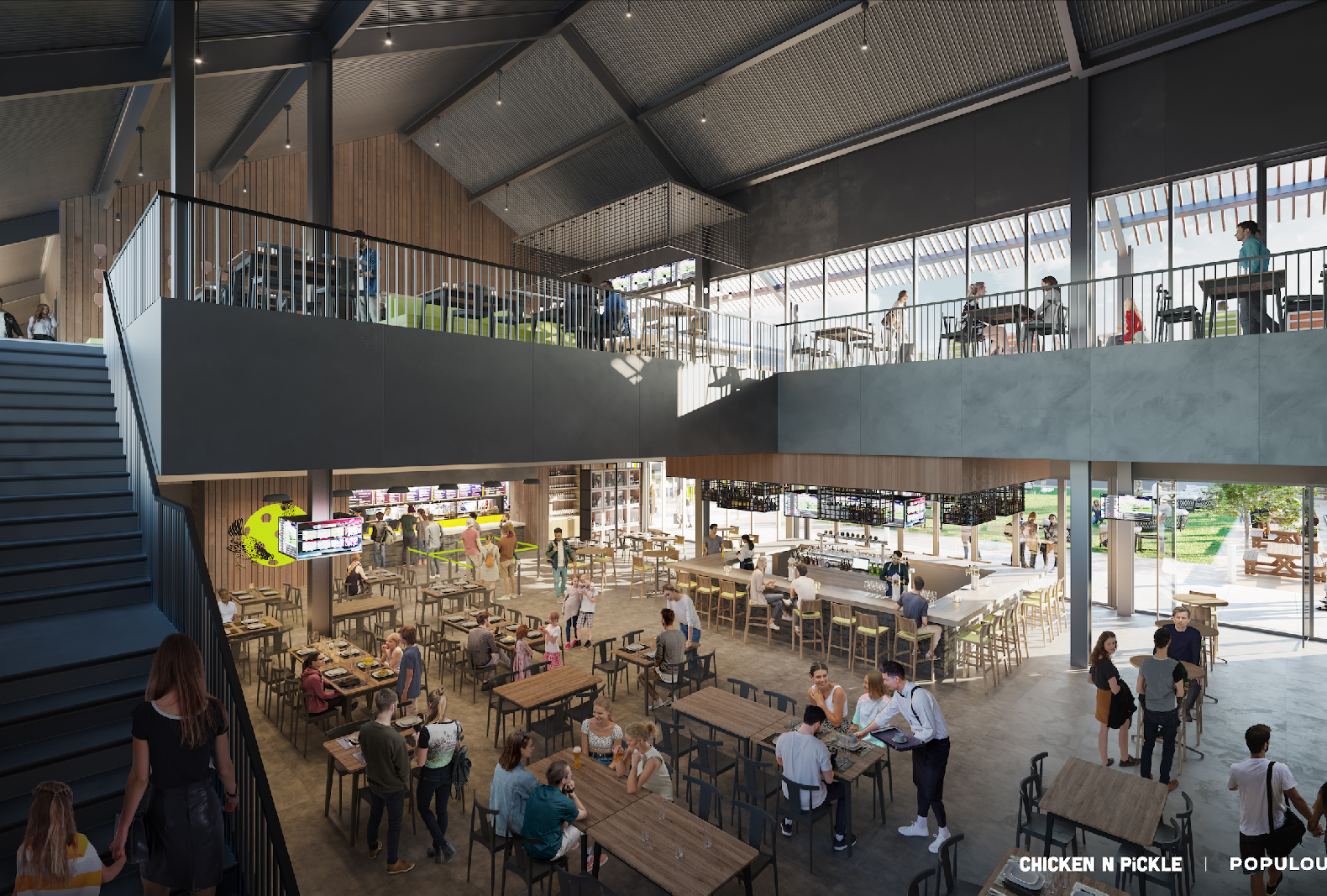 Aspects of the new “farmstead” design are expected to debut at locations in Glendale, Ariz., and St. Charles, Mo., later this year, Crooks said.

“The number of courts vary depending on the market and where we are,” he said. “So there's usually anywhere from four indoors to six indoors and four to six outdoors as well and we're about an acre and three quarters inside the fence on the property.”

“The bestseller on the menu would be the rotisserie chicken, and it is brined for 24 hours,” Crooks said.

For the new design, Paoli said, “we've taken some inspiration from the old farmstead.” The new prototype will also offer a mezzanine and a courtyard, she said.

Chicken N Pickle was founded in 2016 in Kansas City. Crooks said the concept was fortunate during the pandemic, because it offered large outdoor areas at its units.

“Some of our locations we could have 300 to 500 people on property, safely spaced,” Crooks said.

Crooks added that pickleball in the past five years has developed a younger audience, now drawing a larger number of 25- to 35-year-olds and families with children. 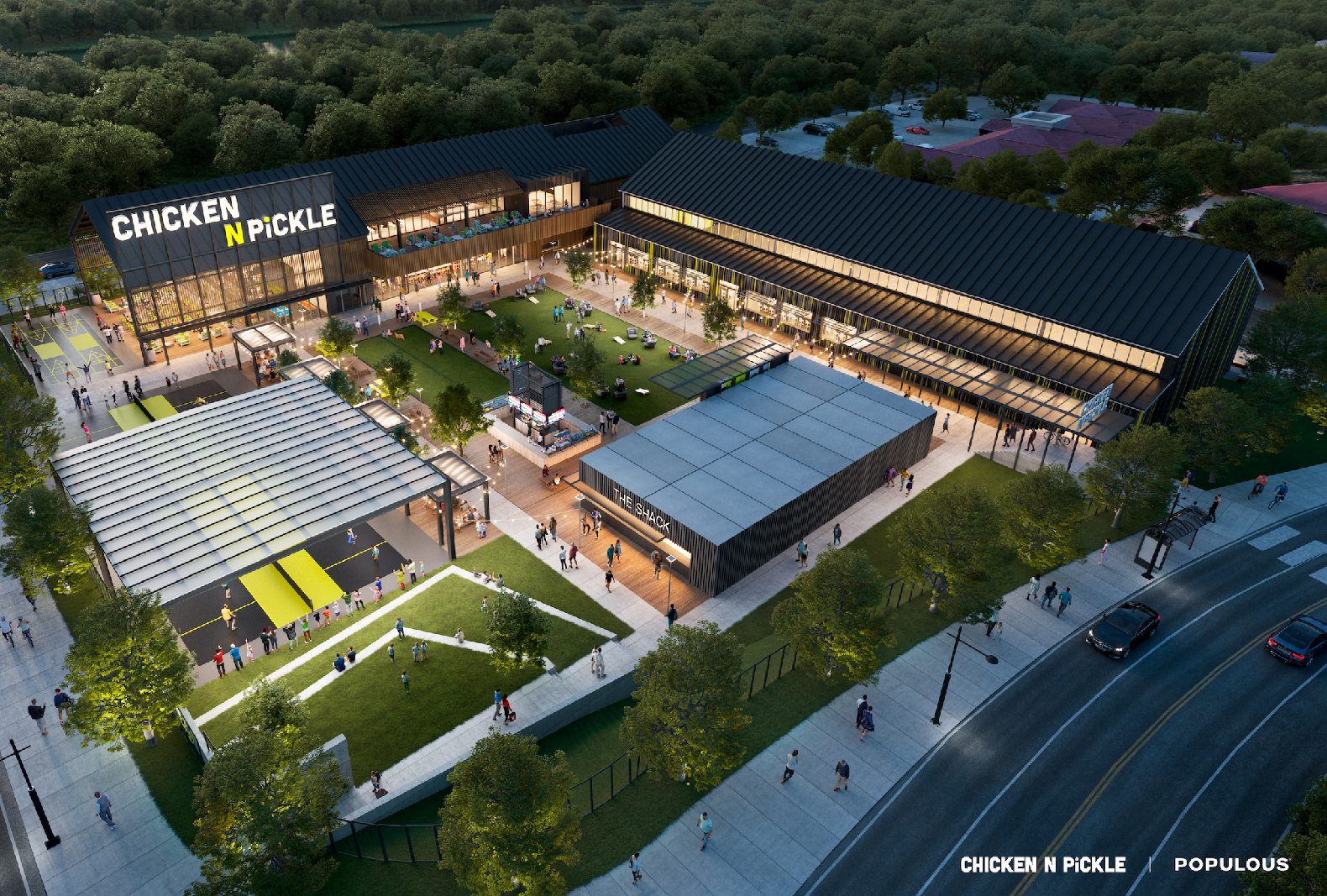 “It's really almost like we've become a community center,” he said, "in that we do healthy food and activities. We do complimentary yoga on weekends. We launch runs and bike rides, so along with pickleball we really try to work hard at being there for the community.”

Each location draws more than 700,000 visitors each year, the company said.

The St. Charles location, which is expected to be the first to introduce the new design, will consist of the restaurant, the indoor club with six pickleball courts, the game pavilion with four open-air courts (two covered, two uncovered), a canteen (a retail and micro-kitchen with an outdoor grill) and an open yard.