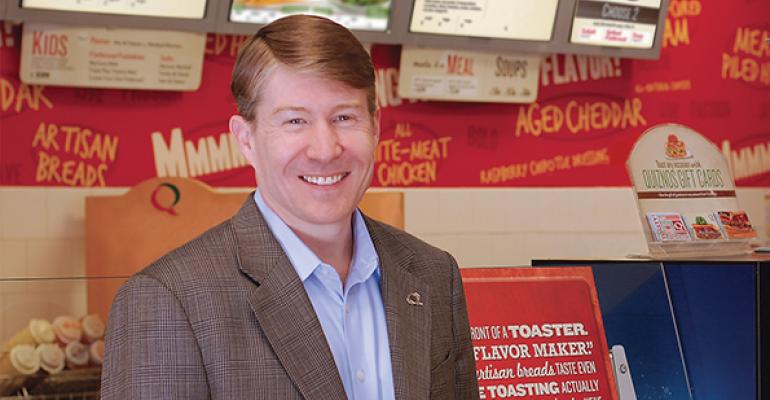 Doug Pendergast is stepping down as president and CEO of the Quiznos sandwich chain to spend more time with his family in Atlanta, the company said Thursday.

Company executives said that Pendergast would stay to help with the transition until June 24, but Scherping will take the reigns immediately.

Pendergast joined the Denver-based chain in January 2015, not long after Quiznos emerged from bankruptcy protection following the completion of a financial restructuring. The chain was also shrinking, reaching about 1,000 locations at the end of fiscal 2014, compared with more than 5,000 in 2006.

Pendergast worked to build trust with franchisees, and refocused the brand on value pricing, improving customer satisfaction scores and enhancing support for operations and occupancy costs, the company said.

During his tenure, the company also launched a new fast-casual concept called Quiznos Grill as a learning lab for the brand’s turnaround efforts.

Pendergast said in a statement that leaving was a difficult decision.

“Ultimately, I need to put my family first,” he said. “I sincerely thank the entire Quiznos system for all that we have accomplished as a team.”

Quiznos chairman Doug Benham, said in a statement: “We believe Quiznos is a stronger company as a result of Doug’s work. Under his leadership, we’ve accomplished several major brand initiatives to help advance our business. We thank Doug for his dedication to the Quiznos brand and have full confidence in Katie and the management team to continue the brand on a successful path forward.”

Scherping joined the company in 2013 as CFO and spearheaded the financial restructuring and overhaul of the food cost and supply chain model to improve restaurant-level economics, the company said.

Most recently, Scherping led the rollout of Quiznos’ new point-of-sale system, which the company said will help bolster sales and lower costs.