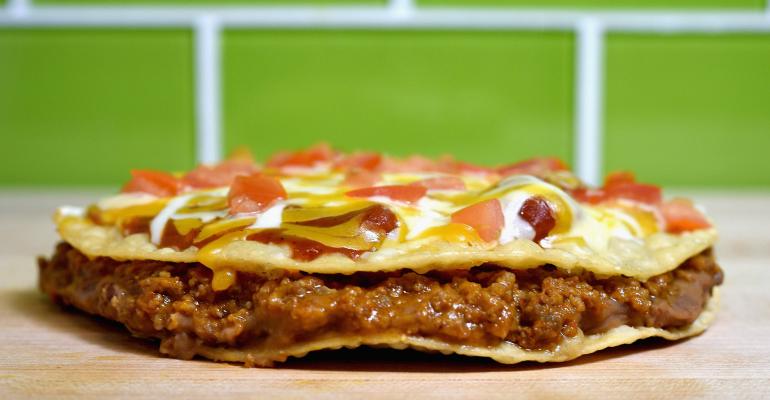 Photo courtesy of Taco Bell
The reintroduction of Taco Bell's Mexican Pizza led to a 6.1% increase in traffic and executives expect that momentum to continue in Q4.
News>Quick Service

Yum CEO David Gibbs said the company's brands' offerings are broad enough to appeal to consumers across every demographic.

The U.S. system complemented a strong global showing for the company, which was up 5%.

Related: NRN editors discuss earnings from Yum Brands and Starbucks, plus the return of the Taco Bell Mexican Pizza

Though menu pricing wasn’t discussed, these sales results come despite a challenged macro environment in which some consumers have reined in their restaurant spending a bit. Executives from McDonald’s and Chipotle noted during their recent earnings calls that this environment has led to some trade-down activity from consumers.

For Yum, Gibbs said “standout performers” KFC and Taco Bell have benefitted from a balance of value and premium value offerings. Examples include KFC’s $5 Mac & Cheese Bowl, brought back in July, alongside its signature buckets, and Taco Bell’s Cheesy Double Beef Burritos alongside its $2 Cravings Menu. Gibbs said an emphasis on premium value is good for the industry, as brands aren’t “just discounting core products” to meet demand.

“Value does seem to be more of a factor today than it was six or nine months ago … We’re seeing more of a return to normal for the industry, rather than an exaggerated emphasis on value,” he said. “We have a unique ability to stand for value in the current economic environment that is broad enough to appeal to consumers across every demographic.”

Taco Bell also got a lift from the return of its Mexican Pizza in mid-September after a fan-led petition and social media campaign. According traffic data from Placer.ai, the relaunch of the Mexican Pizza increased Taco Bell’s weekly visits by over 6%. Executives are confident the product’s popularity will continue this momentum in Q4, and for good reason. Placer.ai reports Taco Bell has sustained weekly year-over-year traffic growth weekly since the relaunch and has also outperformed the QSR segment’s weekly year-over-year visits nearly every week.

KFC also experienced a tailwind from its recent digital efforts. CFO Chris Turner said KFC’s systemwide kiosk sales experienced a 40-plus percent increase in sales year-over-year and now make up 6% of the chain’s sales mix. The potential to continue growing this channel is strong, as just 15% of KFC global restaurants are currently equipped with kiosks.

Pizza Hut U.S. also experienced a positive quarter driven in part by an increase in delivery order fulfilment. The chain was challenged earlier this year by a driver shortage and began partnering with third-party aggregators as a solution, completing the integration of its second aggregator in Q3.  The integration, Turner said, ensures the brand can meet customer expectations during peak delivery hours and allows team members to spend more time “elevating the customer experience.”

“In the beginning of the year, we viewed this as a capacity challenge versus a demand challenge and began working with (aggregators) as one mode to solve that. But we also adjusted hiring practices to attract more drivers, including reducing the time it takes to apply for a job. Both have contributed to us having significantly more capacity in the market,” Turner said.

In Q2, for instance, there was a 23-point gap between carryout and delivery growth. In Q3, that gap narrowed to 17 points.

He added that the company is encouraged by early results of Yum’s recently-acquired tech companies. TikTuk, acquired in March 2021, has extended its capabilities beyond chat ordering into ecommerce. The ecommerce platform recently went live in Mexico, yielding an increase in conversion rates, and Yum expects the technology to be active in 18 countries by the end of the year.

Overall, Yum’s executives are optimistic about the company’s position to operate in a challenged environment, even if a recession should manifest next year – as some predict – and if consumers begin to pull back on their discretionary spending. The company has proven this type of resiliency before, growing sales during the Great Recession of 2008 and 2009.

“Generally, around the world, we’re not seeing any concerns from a consumer standpoint. If you dig deeper in the U.S., we’re seeing a little bit of (a K-shaped recovery). There is K-shaped demand on the high end, with demand for premium, and on the low-end … we have value offerings at a price point that is appealing to a low-end consumer,” Gibbs said.

He adds that Yum and its peers are a particularly attractive option now versus grocery, which is experiencing inflation at a significantly higher clip, Executives also pointed to the benefits of Yum’s scale in this type of environment, illustrated by the company’s continued development engine despite headwinds. On the quarter, Yum’s global system added 979 gross units, or 644 net-new units.

“Our development remains strong as franchisees use market disruptions as opportunities to grow. They can navigate challenges in the supply chain and higher construction costs and get favorable pricing on key items,” Turner said. “Our teams are highly focused on balancing long-term profitability for franchisees and offering value for customers. With our well-capitalized franchise system and unique global scale, we remain confident in our ability to grow in any economic environment.”