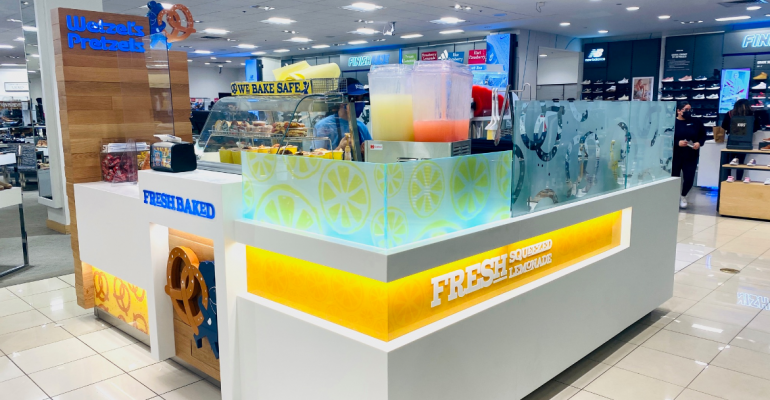 Wetzel's Pretzels
The pretzel stand is right in the middle of the Macy's retail location.
News>Quick Service

Wetzel’s Pretzels is opening a kiosk inside a Macy’s in Southern California, returning to the mall after planning to diversify their store prototypes

Wetzel’s Pretzels — the 350-unit pretzel chain with locations mostly in California and Arizona — is expanding its store prototype horizons with a partnership with Macy’s. The pretzel chain opened a kiosk inside the Macy’s located at the South Coast Plaza mall in Costa Mesa, Calif. with the intent of expanding its retail footprint soon to other shopping experiences, like Lowe’s and Home Depot.

“We've had this internal mantra of ‘how do we bring pretzels to the people wherever the people are located?’” Jennifer Schuler, CEO of Wetzel’s Pretzels said in an interview with Nation’s Restaurant News. “Traditionally, we've been in malls, but we've expanded to food trucks and convenience stores, and now this Macy's partnership, which we have been cultivating for years.”

Related: Wetzel's Pretzels is cruisin' into 2022 with Rose Parade® debut

The Wetzel’s Pretzels kiosk utilizes a small space within the store, while former storage space is being utilized for the kitchen area where pretzels are baked. The kiosk, therefore, does not need as much room to operate to entice shoppers walking by.

Nation’s Restaurant News previously reported on how “food court” brands like Wetzel’s Pretzels and Focus Brands-owned competitors, Auntie Anne’s and Jamba, are trying to expand their reach outside of malls and although this new location inside Macy’s is inside a mall, Schuler said that it still allows for a more flexible footprint, even within a retail atmosphere.

This is not Wetzel’s first retail partnership—the company has also had a partnership with Walmart for several years — but the Wetzel’s kiosk will generally be located at the exit, where Walmart stores usually have retail space set aside for outside businesses. This partnership with Macy’s required more maneuvering.

Moving forward, Schuler said that she could see the company partnering with home improvement retail brands like Home Depot and Lowe’s and that announcements for those partnerships could be coming soon.

“Now we have a blueprint for a specific [store prototype] that we can do at Macy's and other retailers,” Schuler said. “Now we know we’re able to think creatively on flexing the format in the future when we’re faced with other challenges like that configuration challenges.”

For these smaller formats, Schuler said, the company can experiment with smaller menus to make it easier for an on-the-go experience. However, Wetzel’s also wants to try out longer menus catering toward guests with larger meal needs for standalone stores outside of malls and food trucks.

“Chipotle when it started was just about the burrito, right?” Schuler said. “But the menu is so much larger today. […] The big idea is, ‘what if pretzels could be the same thing?’ The menu could expand out to gourmet loaded pretzel dogs, cheese-stuffed pretzel twists and full meals using the pretzel as a base. […] It would exist as a larger footprint where instead of grabbing and on-the-go snack, it would be more of a destination.”