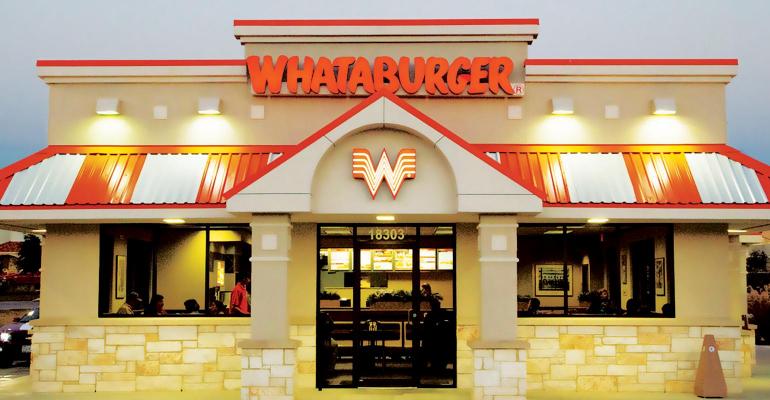 Family-owned Whataburger Inc., the nation’s seventh largest burger brand by U.S. sales, has hired an investment bank to look at strategic options, including a possible sale of a minority stake in the company, Reuters reported early this week.

Representatives for the San Antonio, Texas-based quick-service burger brand, contacted Thursday, said the company always evaluates opportunities but did not comment directly on the report. Morgan Stanley, the investment bank cited in Reuters exclusive report, did not respond to questions by press time.

Whataburger, founded in in Corpus Christi, Texas, in 1950 by Harmon Dobson, remains owned by the Dobson family, including second-generation siblings Tom, Lynne and Hugh Dobson. At the end of 2018, Whataburger had 825 restaurants in 10 states.

“Our company is growing and is always attractive to investors, we constantly get inquiries,” Whataburger’s corporate communications team said in a statement. “We have always evaluated the opportunities that can accelerate growth and maintain the success of our brand, and we will continue to do so in the future.”

The company reported 825 units at the end of the year, including 699 company-operated sites and 126 franchised restaurants, and that was an increase of 0.5% from 2017's year-end 821 total restaurants. Average unit volumes were $2.9 million.

“A stake sale could help Whataburger’s founding family take some cash out of the business without surrendering control,” Reuters noted. “An influx of new money could also potentially help the classic-style chain invest more in preparation technology and delivery as fast-food chains try to make themselves more attuned to their customers with speed and ease.”

The Texas-based chain, historically known for its A-frame buildings, has capitalized on its reputation as a strong regional brand with such offerings as plastic brick toys and even cosmetic bags and Pez dispensers in its online gift shop.

The company’s unit in Hidalgo, Texas, was featured earlier this week in the New York Times’ “Crossing the Border” limited-run weekly newsletter as a gathering place and informal way station for customers from both sides of the Mexican-U.S. international bridge in the area.