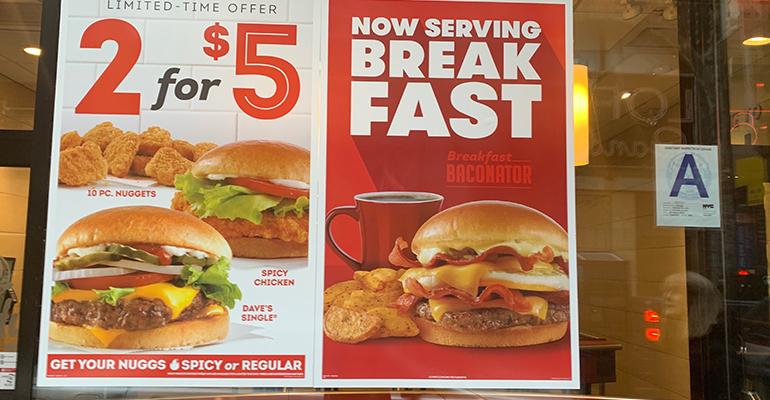 Wendy's: We are fully staffed and ready for breakfast

Wendy's breakfast doesn't launch systemwide until March 2, but it was the talk of the Dublin, Ohio-based burger chain's fourth-quarter earnings call.

"We could not be more excited about our upcoming breakfast launch. A lot of work has been completed and our system is fully staffed and trained. We are ready to launch what we believe will be America's favorite breakfast," said Todd Penegor, CEO of Wendy's, during the company's earnings call.

The brand has been testing the menu, which includes nine menu items plus coffee drinks, across the country for a few months while gearing up for the systemwide launch. Entering a new daypart like breakfast, something Wendy's has tried in the past, isn't easy. But executives have said they've got strong franchisee support, in part because they've made it easy on the operations side. For example, the Frosty-ccino uses the same mix as Wendy's Frostys. The Breakfast Baconator is a similar build to Wendy's traditional Baconator.

"There is strong customer demand for breakfast at Wendy's, and our franchise system is fully aligned to this launch," Penegor said. The chain expects breakfast to make up 6%-8% of sales in 2020.

Related: Sneak Peek: A closer look at Wendy’s breakfast and how prices compare to McDonald’s and Jack in the Box

The breakfast space, or the breakfast wars as some are calling them, is highly competitive. But Wendy's has taken its usual snarky and off-beat approach to fight the competition. Mike Haracz, a former McDonald's corporate chef, is in on the fisticuffs. In a video from Wendy’s he is shown eating and enjoying items from new breakfast menu. During 2020, the company plans to spend approximately $70 to $80 million in advertising the breakfast daypart.

While Wendy's has left a few international markets recently, including Brazil and Malaysia, it's focusing on other global markets and planning to launch in the U.K. and elsewhere in Europe. The brand believes breakfast will perform well in European countries.

On the digital front, the brand is adding new delivery partners and planning to launch a new loyalty program.