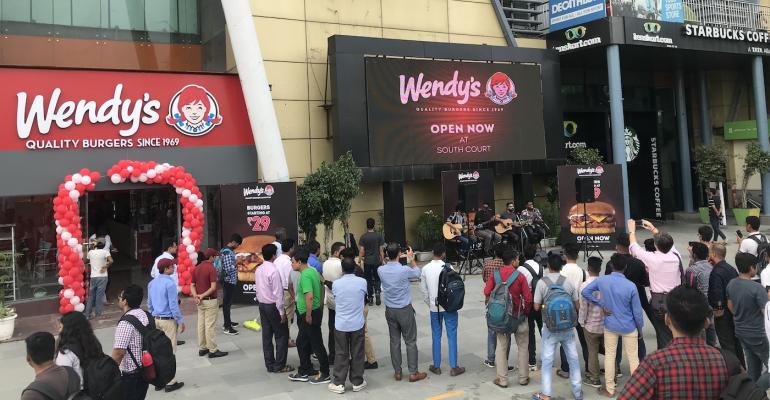 The Wendy's Co.
The pre-COVID opening of the Wendy's in the Huda City Centre in New Delhi, India.
News>Quick Service

The Wendy’s Co. will be opening as many as 250 cloud kitchens and 150 additional traditional units in India over the next decade under agreements with Rebel Foods and Sierra Nevada Restaurants, the company announced Tuesday.

The Dublin, Ohio-based burger brand, through a partnership with Sierra Nevada since 2015, has four traditional restaurants and five cloud kitchens in the Delhi region.

“Cloud kitchens are an important strategic opportunity as we strive to address our urban consumer, particularly in a COVID environment, when now more than ever, people want the convenience of delivery,” a Wendy’s spokesperson said in an email.

“We are already in the process of operating and testing these opportunities with multiple vendors both in the U.S. and internationally,” she said. “We are continuing to evaluate these partnerships and performance as we evolve this strategy.”

In November, Wendy’s Restaurants of Canada and REEF Neighborhood Kitchens launched a ghost kitchen in Toronto, which the parent company said was a test of a new format in dense downtown areas.

“Building a brick-and-mortar restaurant in every neighborhood across Toronto may not always be possible,” said Stephen Piacentini, Wendy’s vice president of global restaurant development and security, in a statement. “By partnering with companies like REEF, we can bring Wendy’s into dense, urban areas without the overhead of operating a traditional restaurant space.”

The India cloud-kitchen partnership is with Rebel Foods, which operates online restaurants at more than 300 cloud kitchens across India, the United Arab Emirates, Southeast Asia and the United Kingdom.

Rebel Foods, founded with an investment from Sequoia Capital and other private-equity firms, operates Faasos, Behrouz Biryani, Mandarin Oak, Oven Story, Sweet Truth and other brands globally, including regional concepts such as Holy Cow in the United Kingdom.

Sierra Nevada Restaurants, Wendy’s master franchisee for India, is owned and managed by IMM, a U.K. investor, with a strategic stake held by Hunch Ventures, a consumer-focused venture fund. IMM also partners the Jamie Oliver Group and owns and manages those brands in India.

Abigail Pringle, Wendy’s president for international and chief development officer, said in a statement: “This reflects Wendy's commitment to growing our International business in strategic high-growth potential markets through both traditional restaurant expansion and digital innovation. …”

Kallol Banerjee, co-founder of Rebel Foods, added that “by partnering with the Rebel Foods network of existing kitchens in India, Wendy’s will get immediate access to rapid scale across the country, at far lower levels of capital.”

Wendy's, founded in 1969, operates and franchises more than 6,800 restaurants worldwide.