Wendy’s dark kitchens have taken on several forms, including this trailer-based neighborhood kitchen in Toronto last year. About 250 cloud kitchens were part of the December 2020 deal for 400 units in India with Rebel Foods and Sierra Nevada Restaurants. Abigail Pringle, Wendy’s chief development officer, said the dark kitchens allow Wendy’s to bring the menu to a market with less cost.

Wendy’s opened a drive-thru-only unit, with no dining room, in The Philippines earlier this year.

Wendy’s plans to expand the drive-thru-only concept to the United Kingdom, as proposed in this rendering.

As part of its development strategy, Wendy’s is leaning into non-traditional locations. This Frosty cart expands the brand’s signature beverage to the Tampa Zoo in Florida.

Wendy’s is scheduled to reenter the United Kingdom with the opening of a unit on June 2, which marks a return to the British market after it exited in 20 years ago. “We think that our launch in the U.K. will absolutely be foothold for our broader European expansion,” said Abigail Pringle, Wendy’s chief development officer.

“We've given [franchise owners] a whole suite of options from a container restaurant to modular buildings,” Pringle said, adding that Wendy’s is also offering a franchisee incentive program through June 30 to help grow multi-unit deals. This restaurant is in Guatemala.

Wendy’s offered this rendering of the interior of its new restaurant in the United Kingdom, which is scheduled to open in Oxford in June.

Wendy’s offered this rendering of the interior of its new restaurant in the United Kingdom, which is scheduled to open in Oxford in June.

Wendy’s Next Generation design offers an area for pickup delivery orders on the exterior of the building so drivers aren’t required to enter the lobby.

Wendy’s units slated for Canada and the United Kingdom include a proposed “Next Generation” design with a covered area for outdoor seating, as in this rendering.

The interior rendering for Wendy’s “Next Generation” design includes a proposed area for order pickup that is separated from the order counter.

Wendy’s offers opportunities for the conversion of restaurant locations abandoned by other brands, such as this unit in Bridgeton, N.J.

Wendy’s launched its Smart 2.0 design in 2017, which was applied at this unit in Dublin, Ohio. “We really created a new global design standard for what we wanted to do to be innovative and really change our conventional thinking,” said Abigail Pringle, Wendy’s chief development officer. It addressed changes wrought by the brand’s mobile smartphone app, accommodated kiosk ordering and eased the queuing process to speed service, Pringle said. 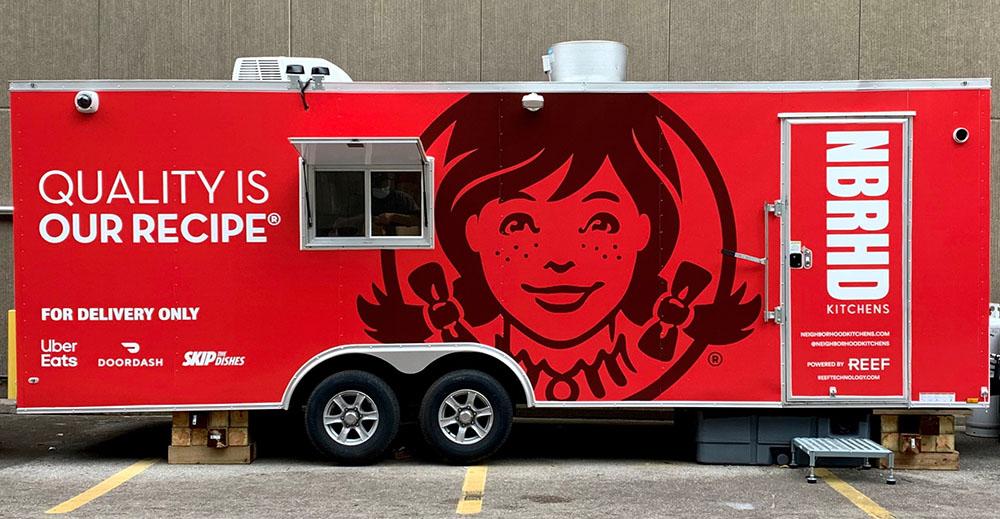