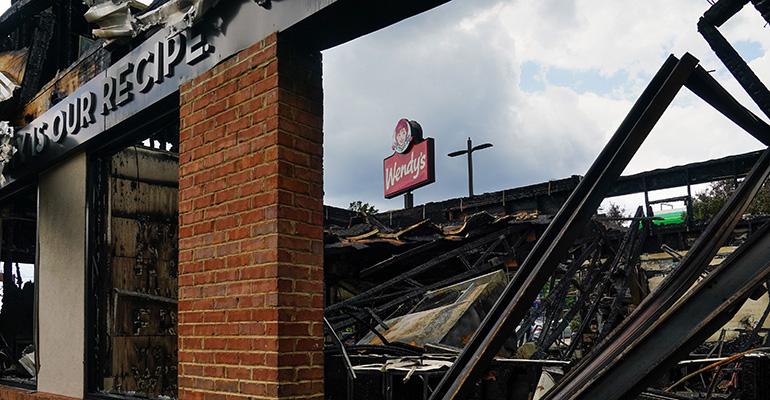 ELIJAH NOUVELAGE / Contributor / AFP
A Wendy’s restaurant in Atlanta became the backdrop for the latest flashpoint in an ongoing national movement for social justice after police reportedly shot and killed Rayshard Brooks in the drive-thru lane on Friday.
News>Quick Service

After initially peaceful protests, the franchisee-owned restaurant in Atlanta was torched over the weekend

A Wendy’s restaurant in Atlanta became the backdrop for the latest flashpoint in an ongoing national movement for social justice after police reportedly shot and killed a black man in the drive-thru lane on Friday.

The death of Rayshard Brooks sparked protests around the restaurant over the weekend, during which the franchisee-owned Wendy’s unit was set on fire. Police used tear gas and less-lethal weapons to disburse the crowd, and scores were arrested.

Wendy’s president and CEO Todd Penegor in a statement on Sunday called Brooks’ death tragic, saying, “the pain this has caused saddens us all.”

He said the company has proudly served Atlanta for decades and “seeing our restaurant burn was difficult, but we are extremely grateful that all of the team members remained safe.”

Penegor said the franchise operator — who was not named — will continue to pay workers that have been displaced, and they will be offered the option of working at other Wendy’s units in the area. The company is also making funds available through an employee-assistance program for those who experience financial loss.

Penegor also pointed to recent statements by the company reiterating its commitment to “make real change by supporting our employees and the Black community through social justice, youth and education efforts.”

The company recently formed an advisory group of Black leaders and others to help shape a blueprint for diversity and inclusion and donated $500,000 to the Thurgood Marshall College Fund. In social media, Wendy’s pledged to use its platform in support of racial equality.

In the coming days, we’ll be using our Twitter account to amplify Black voices. Because what’s the point of this big platform if we don’t use it for what matters during times like these?

The police were called to the Wendy’s unit late Friday after Brooks reportedly fell asleep in his car in the drive-thru lane.

After conducting a sobriety test, the officers determined he was too inebriated to drive and attempted to arrest him. Brooks scuffled with officers and appeared to grab a taser. He was shot by the officers while running away.

The officer who shot Brooks was fired on Saturday, with a second officer placed on administrative duty.  The death has been ruled a homicide. The chief of police resigned.

The incident renewed calls by protesters and civil rights groups for the de-escalation of police, an issue that has been in headlines for weeks following the killing by police in Minneapolis of George Floyd.