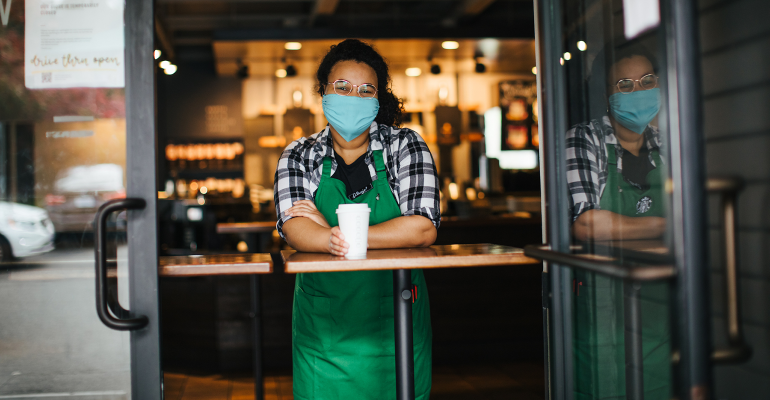 Gov. Jay Inslee announced a list of stakeholders to help with vaccine distribution; Starbucks is tasked with operational efficiency and design expertise/support

Washington state Gov. Jay Inslee announced on Monday a statewide COVID-19 vaccine distribution plan, including the Washington State Vaccine Command and Coordination Center, staffed by Department of Health officials and state business partners like Starbucks. As a stakeholder, Starbucks will assist with “operational efficiency, scalable modeling and human-centered design expertise and support.” The team of business leaders — also including Microsoft, Costco, and the National Guard — will help Washington reach its new goal of distributing 45,000 vaccinations daily.

"This is an opportunity to serve others and have impact on a significant humanitarian effort,” said Kevin Johnson, Starbucks president and CEO. “Governor Inslee has convened some of the best public and private resources and capabilities to engage in a concerted effort to optimize and accelerate the vaccination process across our home state. We are proud to contribute in every way we can to help operationalize and scale equitable access to the vaccine.”

In an interview with NBC News, Starbucks CEO Kevin Johnson clarified that they have assigned 11 employees with expertise in labor and deployment, operations, and research and development to help speed up and optimize vaccine distribution. The team will be assisting with vaccination site selection across the state, leveraging solutions to create equitable access to the vaccine, and focusing on efficiency solutions with patient experience in mind.

CDC data confirmed that 31,581 people out of 7.6 million Washington residents have received both doses of the vaccine, or just under 0.5% of the total population.

"We can't think that's an acceptable pace," Starbucks CEO Kevin Johnson told NBC News. "So we have to dramatically scale this up and accelerate the progress."

The slow progress reflects the nationwide speedbumps in vaccination rollout, with reports of dosages that have been thrown away past the expiration date, and the quickly dwindling vaccination goals of President Trump’s Operation Warp Speed vaccination plan from 300 million doses by January to 10% of that original goal. According to the most recent data from the Centers for Disease Control and Prevention, currently, 11.1 million Americans, or just over 3% of the total population have received both doses of the vaccine.