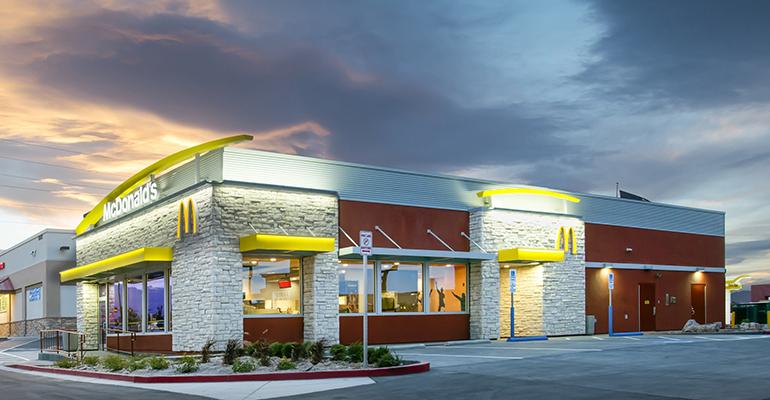 Analyst: ‘The McDonald’s system is much more than just one man’

When a CEO abruptly steps down from a company amid scandal, internal disruptions are sure to follow as successors pick up the pieces with Wall Street on high alert.

This is certainly the case with McDonald’s Corp. The iconic brand shocked the industry on Sunday when the quick-service company fired its CEO and turnaround specialist, Steve Easterbrook. On Monday, investors expressed disappointment about the untimely dismissal, and McDonald’s offered few details. The so-called “consensual relationship” violated company policy, and the board fired Easterbrook effective Friday.

In a letter sent systemwide to employees, Easterbrook, who is divorced, called it a “mistake” to get involved with a subordinate given McDonald’s values.

Such policies are commonplace in Corporate America, which in the #MeToo era, has zero tolerance for romantic relationships between an executive and his or her employees.

“You cannot have a relationship as a superior of an employee,” said John Gordon, an analyst at Pacific Management Consulting Group.

“It strikes as bad management in so many different ways. #MeToo matters dramatically, especially for a global corporation. Especially for the CEO, who should be setting the example.” 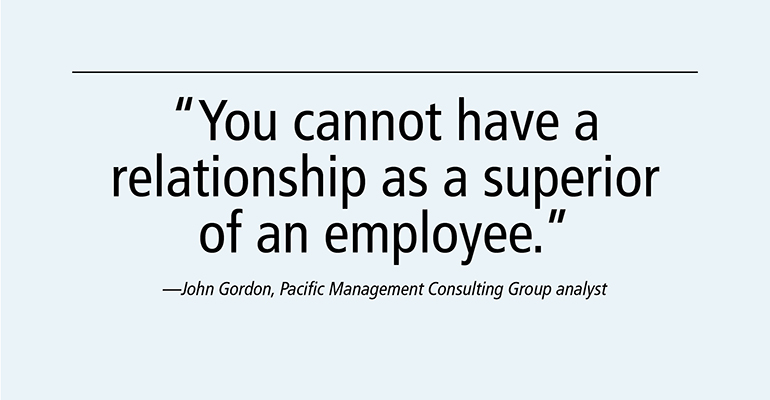 In the aftermath of the firing, Wall Street, so far, has been somewhat forgiving.

On Monday, McDonald’s stock fell around 3% by midday as most investors showed cautious optimism for the brand’s succession plan. Most admitted that the new CEO has big shoes to fill.

Since being tapped as CEO and president in 2015, Easterbrook led radical changes for the then-struggling burger giant including adding fresh beef patties to the legacy Quarter Pounder, introducing all-day breakfast and pushing hard on innovation. That’s resulted in 17 consecutive quarters of global same-store sales growth. In the U.S., same-store sales have been on the rise for the past 11 quarters.

Easterbrook was rewarded handsomely for his efforts with a total compensation of $15.9 million in 2018, making him the third highest-paid CEO of a publicly traded restaurant company, according to NRN’s 2019 annual executive salary survey.

“We are certainly disappointed by the circumstances of Mr. Easterbrook’s departure given the success McDonald’s has seen in recent years and the greater alignment and urgency he brought to major initiatives like technology,” Peter Saleh, BTIG managing director and restaurants analyst, said in a note. 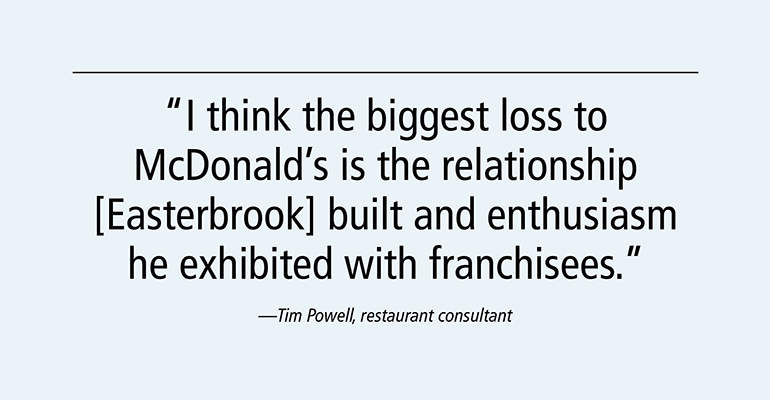 Brand watchers say that mentorship means Easterbrook’s strategies are unlikely to change with a baton handoff to Kempczinski, who lacks years of experience working with a largely franchised company.

“I think the biggest loss to McDonald’s is the relationship [Easterbrook] built and enthusiasm he exhibited with franchisees,” restaurant consultant Tim Powell said. “He was able to reduce the historical tension between corporate and franchisees that had been a hurdle to innovation and long-term growth.”

Richard Adams, a former McDonald's franchisee who acts as a consultant for operators, said he’s heard that Kempczinski in his short time with the brand “has proven that he's a control freak who treats franchisees like employees.” 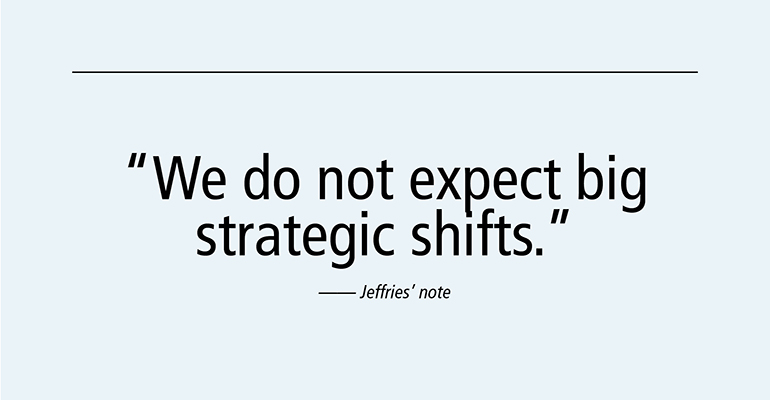 Still, Saleh said Kempczinski has been “an instrumental part” of the McDonald’s turnaround story, which includes working closely with U.S. operators.

“We are definitely surprised by the news and view Mr. Easterbrook’s departure as a loss but also believe the company’s strategy is on very solid footing and the McDonald’s system is much more than just one man,” Saleh wrote.

Specifically, they noted that Kempczinski, who came to McDonald’s in 2015 after stints at Kraft and PepsiCo, had led major pivots for the brand, domestically. Those include overseeing store remodels dubbed Experience of the Future; testing new technologies to improve speed and service at the drive-thru, as well as in the kitchen; trimming the late night menu; and giving franchisees more flexibility with all-day breakfast.

“We do not expect big strategic shifts” [under Kempczinski], Jeffries wrote in a note issued Monday.

Still, Kempczinski inherits McDonald’s at a time when competition for customers is at an all-time high. The brand continues to struggle with slowing guest counts and is about to face a new competitor at breakfast: Wendy’s.

Saleh said Kempczinski’s “legacy will hinge on his ability to generate traffic growth in the U.S., which neither of his two predecessors were able to achieve.”

Gordon said Wall Street will be watching Kempczinsk closely, looking for what new goals he brings to the table.

“The danger isn’t right now. The danger is a couple of years out, if new ideas are stifled,” Gordon said.