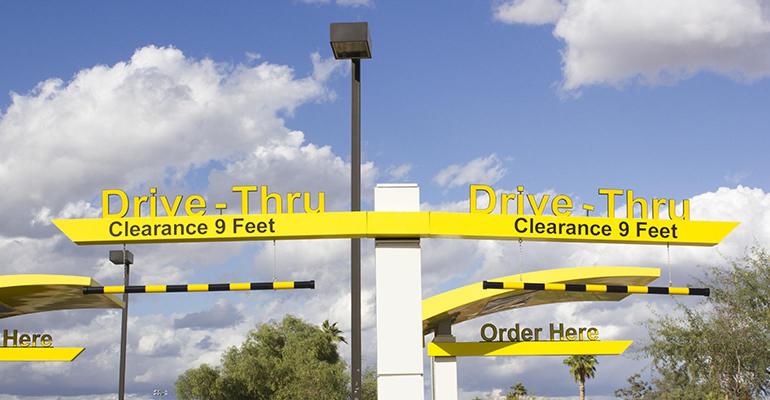 Getty Images
Initial traffic results from the coronavirus are in from Foursquare and Placer.ai.
News>Quick Service

QSR is bright spot in restaurant industry downturn, according to data from Foursquare and Placer.ai

The coronavirus pandemic has wreaked havoc on the nation’s restaurants, and as traffic data from the early stages of this crisis becomes available, we can begin to analyze the situation in more detail. While dine-in traffic has certainly plummeted, thanks to social distancing recommendations and states and cities mandating restaurants to close or serve off-premise diners, it seems that quick-service restaurants offer a glimmer of hope in these dark times.

Foursquare looked at foot traffic across the country and specifically in states with the highest number of confirmed cases, according to The New York Times — Washington, New York, and California — focusing on four cities: Seattle, San Francisco, Los Angeles and New York City.

“Location data verifies meaningful changes in consumer behavior at a variety of places,” a blog post from the location data company reads. “In the ~10 weeks since cases were first reported, COVID-19 has shaken humanity across industries and across geographies. The ultimate impact of the coronavirus is still highly unknown and expected to be at a much larger scale than anything we’ve seen to date.”

At causal dining restaurants, the national data showed an 11% decline from the week of February 19 to the week ending March 13. The four cities Foursquare focused on saw declines between 8-12% restaurants around February 24. Foot traffic then remained fairly stable in San Francisco, Los Angeles and New York City from February 24 to March 8. “Visits began declining again around March 11, perhaps indicating cities will continue to see further declines as the pandemic grows,” the company wrote in the blog post. 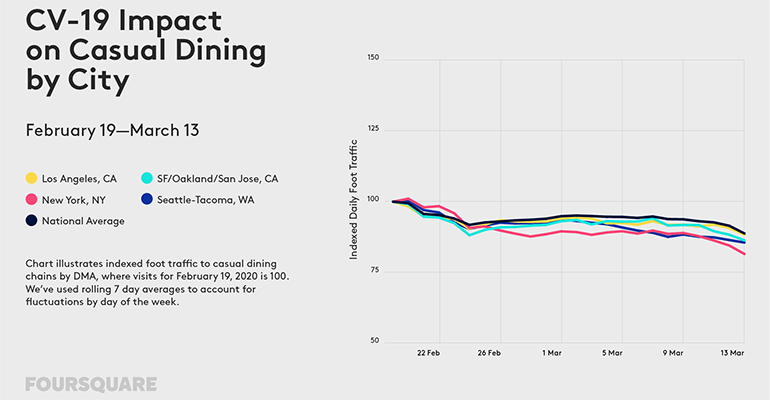 But Foursquare saw traffic increasing at grocery stores, gas stations and QSR locations. Nationally quick-service restaurants saw an 11% uptick in traffic from the week of February 19 to the week ending March 13. In New York, there was a 9% uptick in traffic during that time. 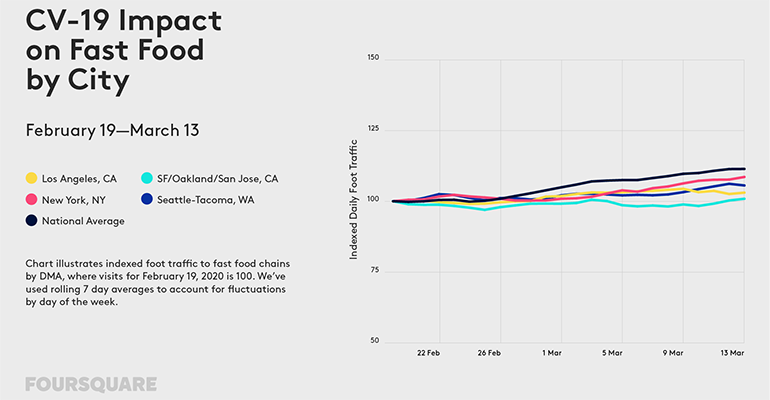 Foot traffic analysis platform Placer.ai saw similar results when it looked at six top national QSR brands to see year-over-year growth from the last week of February and the first week of March.

“The consistency across the board was incredibly impressive,” a blog post from Placer.ai reads. “For giant brands with massive retail footprints, this is all the more impressive. Starbucks and McDonald’s locations, for example, have seen declines in areas with higher concern – like Washington state. This means that in areas with lesser worries, the limitations on travel and movement may actually be helping them grow.” 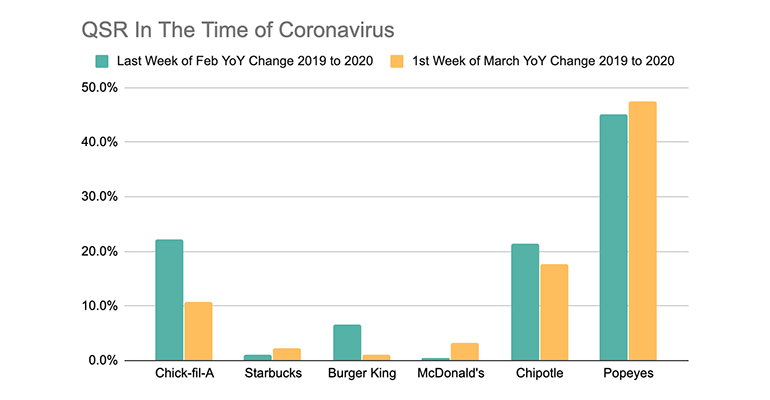 “Critically though, this data does not take into account delivery, which could provide another huge strength during a period likely to be marked by lockdowns and greater emphasis on social distancing.”