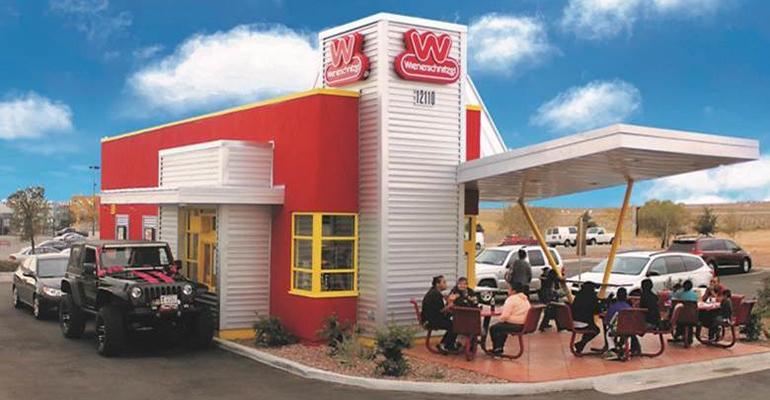 Among bright spots in the COVID-19 pandemic, hot-dog concept Wienerschnitzel saw sales increase an average 22% between May and the end of October. And to accommodate that six-month increase, the company enhanced its drive-thru experience to make it faster and more efficient.

The drive-thru, which has grown in popularity during the coronavirus pandemic as a contactless mode of service, has been a large part of Wienerschnitzel’s sales, traditionally making up about 65% of the total before the pandemic.

“We always look at it from the inside out,” Bills said. “We wanted to make sure we didn’t complicate the kitchen. … We worked with marketing to come up with a kind of pre-sale board.” Similar to a real-estate sign, it featured core items and combo meals, he said.

“What that did is that allowed people to come up to the menu and already know what they needed to order,” Bills said.

The beverage program, especially the flavored drinks, saw increased sales during the pandemic, he said, and those orders are fulfilled by the drive-thru worker. And with increased drive-thru business, every second mattered, Bills added.

Wienerschnitzel also printed lines on the cups so crew members could measure the mix easily, he said, and create efficiency.

Bills said the brand expanded a small test of line-buster ordering tablets into 20 restaurants to expedite orders. The tablets are an extension of the Micros point-of-sale system, he said, noting that he tablets do require added WiFi cabling, which is a challenge in retrofitting older stores for the brand that was created in 1959. The cabling specified as standard in new stores.

The company also introduced scanners for coupons, a big part of Wienerschnitzel’s markering, this year as well, he said.

This week, Wienerschnitzel introduced some mobile ordering in a test at 20 restaurants, Bills said. “We wanted to make sure we could consolidate some of our third-party [delivery] partners,” he added. The company is working with Olo on that integration. The company is eying a possible rollout in March, and it opens the possibility of catering.

Bills said the primary focus of the brand has always been drive-thru, with some units having only 15 to 20 seats. So indoor-dining restrictions had minimal effect on most units. “We were definitely built for this,” said Bills.

The greatest share, or 212, of Wienerschnitzel’s 349 units are in California, which has restricted indoor dining during the pandemic.

Some regions, such as Texas, already saw heavy drive-thru use. In Texas, he said, about 90% of traffic before COVID-19 was through the drive-thru.

Bills said the comfort-food focus of the menu, which has a best-seller of a chili-cheese dog, has helped the brand during the pandemic.