Travis Scott brings his own spin to McDonald’s value meal; see all the swag available through the QSR chain 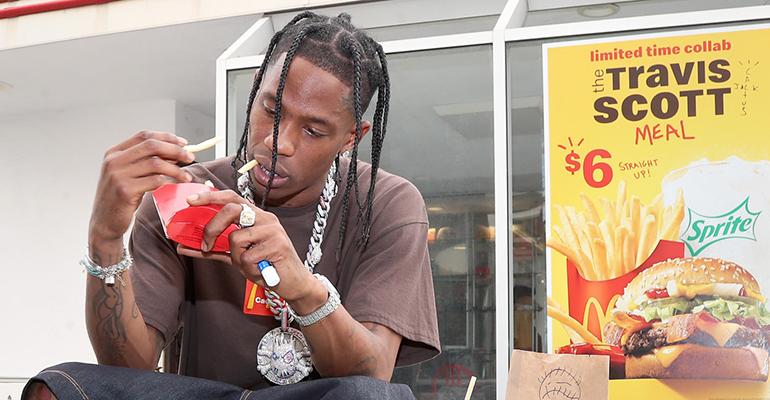 McDonald’s has collaborated with a new celebrity, the first one since Michael Jordan back in 1992. Its newest celebrity had just been born when that collaboration was happening.

“Astroworld” rapper Travis Scott has partnered with McDonald’s to create the Travis Scott Meal, a $6 combo including a Sprite, fries with BBQ sauce and a Quarter Pounder with bacon, lettuce and cheese, Scott’s own McDonald’s order.

“Travis is a true McDonald’s fan having grown up visiting our restaurants in Houston, not to mention one of the biggest musical acts and cultural icons in the world,” U.S. chief marketing officer Morgan Flatley said in a statement.

Houston-born Scott’s label Cactus Jack is the official name behind the partnership.

Clothing ranges from new uniforms for McDonald’s workers (some of which have already begun popping up on resale sites for exorbitant amounts of money) to home goods. Rugs for $250 featuring the golden arches, a $90 chicken nugget pillow, a $30 lunch tray and a $78 vintage blanket are some of the stranger items for sale.

That doesn’t include a six-foot, life-size cutout of the Cactus Jack action figure — Scott from a 2015 music video and featured in the TV spot for the collaboration —complete with giant French fries for $65.

Clothing items range in price from $28-$48 for various designed t-shirts with artist illustrations to upwards of $200 for jeans with the Golden Arches on the back pocket.

All merchandise, sold through Scott’s own website, is branded with the McDonald’s logo. The collection is completely sold out.

Scott joins a slew of rappers collaborating with chains including Tyga who launched virtual-only brand Tyga Bites, Snoop and Dunkin’, Wiz Khalifa opening his own virtual brand, HotBox by Wiz and Chance the Rapper and Wendy’s for the spicy chicken nugget in 2019 after a viral tweet.