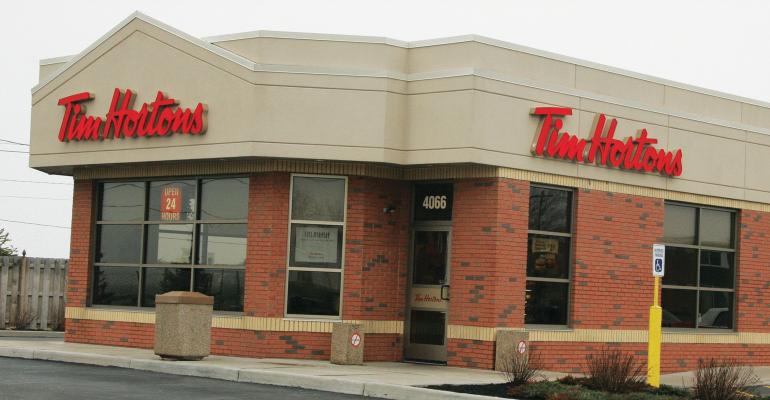 Restaurant Brands International, the Toronto-based parent company of Burger King, Tim Hortons, and Popeyes Louisiana Kitchen, reported disappointing systemwide sales growth for the first quarter ended March 31 of 2.8%, down from 6.4% the year prior, according to an earnings release on Monday.

Tim Hortons sales growth fell short of investor expectations, reporting a same-store sales drop of 0.6%, down 0.3% from the year prior. RBI CEO José Cil attributed those sluggish numbers to extreme weather conditions throughout Canada during the early part of the quarter, as well as underperforming customer engagement with promotional platforms.

But despite disappointing sales, Cil emphasized enthusiastic guest reactions to Tim Horton’s new loyalty program, which officially rolled out in March and exceeded corporate expectations, with 20% of Canada’s population participating in the loyalty program just five weeks after the launch date.

“Half of our transactions are already going through [the] loyalty program in a very short period of time,” RBI COO Joshua Kobza said during Monday’s earnings call. “It allows us to give something back to our loyal guests and helps us to be able to understand guest expectations much better, to look at everything on a guest-by-guest basis. This will change the way we manage business.”

Burger King’s quarterly performance fell short of expectations, too, as the brand reported same-store sales growth of 2.2%, down from 3.8% same-store sales growth the year prior, partially attributable to lukewarm customer reactions toward the spicy chicken nuggets relaunch in Feb. 2019, as well as the brand’s continued struggles at breakfast. To help boost sales, Cil said Burger King would be leaning on coffee and breakfast sales through its BK Café platform, which just launched a $5 monthly coffee subscription service in March.

Moving forward, all eyes will be on Burger King’s investment in the Impossible Whopper – made with vegan Impossible “meat” — which made its debut to select test markets in the St. Louis area earlier this month, and will be rolling out nationwide by the end of 2019, Burger King said Monday.

Burger King also struggled with slower restaurant growth this quarter, with 5.7% unit growth for the quarter, down by 1.2% from the year prior. The slowdown, Cil said, is attributable to systemwide renovations of store formats, which are slowly being converted into the Burger King of Tomorrow restaurant design that emphasizes enhanced drive-thru efficiency and a tech-driven experience, including digital outdoor menus and new digital ordering kiosks.

Popeyes Louisiana Kitchen reported a marginal 0.6% increase in same-store sales, down from 3.2% same-store sales a year earlier. The “sequential improvement” globally was boosted by popular limited-time offers and growth in third-party delivery, which has rolled out to 1,300 restaurants systemwide over the past year.