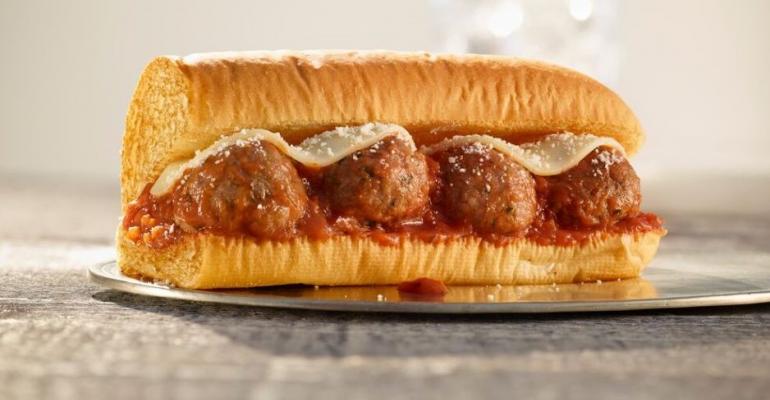 Tag, you're it: Subway becomes next big chain to add plant-based meat

The Milford, Conn.-based company said it will debut a sandwich using a custom vegan meatball from Beyond Meat. The sandwich, dubbed the Beyond Meatball Marinara, will be sold at 685 restaurants in the U.S. and Canada starting in September.

“Our guests want to feel good about what they eat and they also want to indulge in new flavors. With our new plant-based Beyond Meatball Marinara sub, we are giving them the best of both worlds,” Len Van Popering, Subway’s chief brand and innovation officer, said in a statement.

A national launch is possible depending on guest feedback.

“We anticipate guests across Canada and U.S. will be encouraging us to expand, so we hope to make a decision soon,” Subway said.

Most plant-based protein meals cost more than the meat-based product they are attempting to imitate.  Subway, whose restaurants are 100% franchised, declined to provide a price for the sandwich.

Subway joins a fray of chains testing or permanently adding meals made with plant-based proteins.

Del Taco, which debuted Beyond Meat tacos in April, said the alt-protein tacos have become one of the best-selling new products in the chain's history. In mid-June, the Lake Forest, Calif.-based company had sold about 2 million tacos.

Subway said it chose Beyond Meat because it worked with Subway to develop an exclusive, not off the shelf, product. Popering, tasked with elevating the Subway menu with more innovative meals and ingredients, said the plant-based meatball was co-developed by both companies.

Beyond Meat is known for collaborating with brands to create custom recipes. Del Taco, for example, takes the company’s raw meat and blends it with Del Taco’s proprietary seasonings for tacos and burritos.

Subway said it plans to work with Beyond Meat to develop more plant-based menu offerings to meet the growing demand for such products among flexitarians.

"We are forming a strategic culinary partnership," Subway said.

According to market research group The NPD Group, 14% of U.S. consumers, or 43 million people, regularly use plant-based alternatives such as almond milk, tofu and veggie burgers. Within that group, 86% do not consider themselves vegan or vegetarian, NPD said.

Adding a sandwich with an alternative protein is also part of a Subway plan to bring new flavors to the menu. The company recently introduced sandwiches made with King’s Hawaiian and ciabatta breads. Van Popering, who was promoted to his current role in June, also spearheaded the recent partnership with food media brand Tastemade, which is collaborating with the company to produce and market new sandwiches.