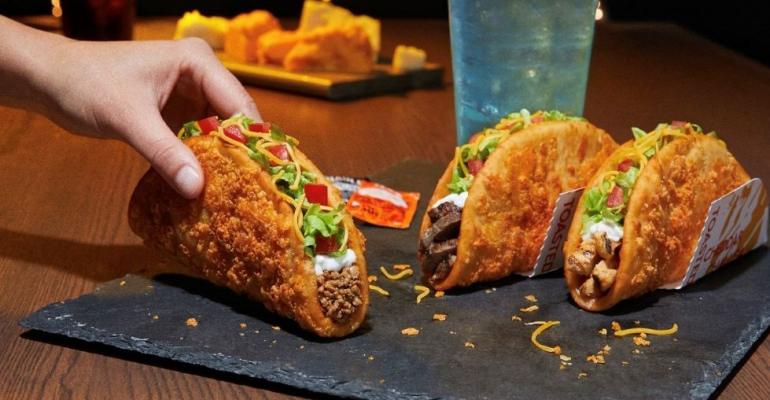 Brand co-president: 'Your whole car will smell like a grilled cheese dream'

It's rare for Taco Bell to disappoint its fans.

But that's what happened last week when the brand announced an “out with the old, in with the new” menu refresh that included the elimination of nine items from the menu. Some balked at the loss of longtime favorites like the Double Decker Taco and the Beefy Mini Quesadilla.

The Irvine, Calif.-based chain is hoping for forgiveness with the introduction of the Toasted Cheddar Chalupa, the chain’s largest international release since the Naked Chicken Chalupa landed on global menus in 2017.

“We know cheese makes everything better and baking aged cheddar into the shell of an already iconic product is a game changer our fans will love,” Liz Matthews, chief food innovation officer, said in a statement released Wednesday.

Fans who stayed at the Taco Bell-themed hotel this summer were among the first to try the Toasted Cheddar Chalupa outside of test markets. The so-called “elevated chalupa" contains the same ingredients as a Taco Supreme: seasoned beef, shredded lettuce, diced tomatoes, grated cheddar cheese and reduced-fat sour cream. Customers can also choose chicken or steak.

Her inside tip: Order the Toasted Cheddar Chalupa in the drive-through and eat in your car with the windows rolled up.

“That thing smells so amazing. Your whole car will smell like a grilled cheese dream,” the co-president and 2019 Golden Chain winner told Nation’s Restaurant News in a recent  phone interview. “It gets all your senses going. I love it so much.”

The chalupa, first introduced in 1999, has served as inspiration for other shell innovations including the Baja Chalupa in 2000 and the Double Chalupa and the Naked Chicken Chalupa, both introduced in 2017.

The Toasted Cheddar Chalupa will sell for $2.49 a la carte. It will also be available in a $5 Box that also includes two Crunchy Tacos and a medium soda.

It officially debuts on the refreshed menu Sept. 12. However, Taco Bell said it giving a few fans the chance to try the taco before its launch date.

Where? That’s a secret.

“Because the foodiest hotspots are the best kept secrets, fans will have to uncover where the advanced tastings of Toasted Cheddar are being served for themselves,” the chain said.