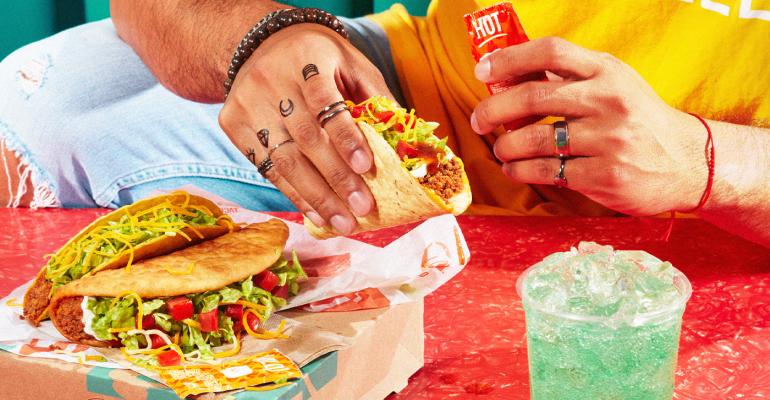 Taco Bell's new plant-based protein can be added to any menu item through customization.
News>Quick Service

Taco Bell is testing out a new plant-based protein

Taco Bell announced Thursday that the Yum Brands company is testing a proprietary “boldly seasoned plant-based protein” separate from the company’s current partnership with Beyond Meat.

The pea-and-soy-based protein is currently being tested in select locations in Birmingham, Ala. and customers can order it for a limited time atop the new Crispy Melt Taco or on the Nachos BellGrande. The protein can also be added to any menu item through customization.

The Crispy Melt Taco is made with a white corn tortilla, a blend of melted, shredded cheddar, mozzarella, and Monterey pepper jack cheeses; nacho cheese sauce; lettuce; cheese; tomatoes and sour cream, along with the new protein, of course (or whichever protein customers choose).

This is the latest plant-based protein news from Taco Bell, which has become known for its plentiful options for vegetarians and flexitarians. In Dec. 2019, Taco Bell began testing its first version of a proprietary plant-based protein in international markets. The oat-and-legume-based Oatrageous Taco filling was added to the menu in European markets, including Spain in Finland, but never made its way to the U.S.

Related: How Taco Bell made a viral moment last

Then in 2020, Yum Brands announced a partnership with Beyond Meat and began testing plant-based proteins at each of its brands, though Taco Bell’s own Beyond Meat-based menu item won’t be served until the latter quarter of 2022. The quick-service Mexican chain also brought back its ever-popular cheesy fiesta potatoes after a hiatus, when they were removed from the menu during the pandemic but returned with aplomb in Jan. 2021.

This is also not the first time Taco Bell has announced the test of a proprietary plant-based protein. In April 2021, the company tested a “boldly seasoned” pea and chickpea blend protein that was used as the star of the Cravetarian Taco, which was only available as an LTO in one location in California before disappearing from menus. Later that summer, Taco Bell also tested a plant-based Naked Chalupa at one location in Irvine, Calif.

Regardless of protein, the Crispy Melt Taco is available for $2.49.