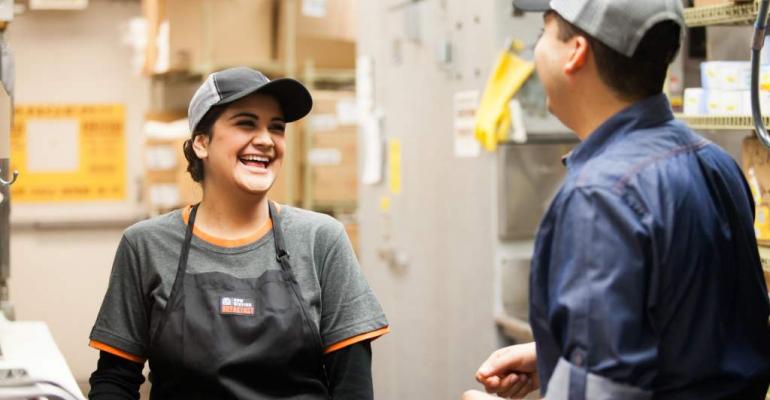 Select Taco Bell managers at company-owned restaurants might get as much as a $50,000 a year raise when the chain tests increasing store leader salaries to $100,000 a year. The Irvine, Calif.-based quick-service chain said the pilot pay boost, along with a new paid sick policy for company employees, are part of five 2020 goals.

The salary test will take place later in the year. The company has not selected which restaurant managers will get the pay boost.

“We are still in the planning process and have not confirmed exact locations or number of RGMs (Restaurant General  Managers)” expected to take part in the test, said Ferril Onyett, senior director of global training and international human resources.

The salary of a restaurant general manager at Taco Bell corporate stores ranges from $50,000 to $80,000 a year. Salaries are based on various factors including “time in the role, location and experience,” Onyett said.

According to the Chain Restaurant Total Rewards Association, the average pay for a QSR general manager is $55,341. Some Taco Bell managers taking part in the test could be nearly doubling their salary when compared to their QSR peers.

Still, Taco Bell managers taking part in the pilot wouldn’t be the highest paid store leaders in the fast food world. Taco Bell's neighbor, Irvine, Calif.-based In-N-Out Burger, is known for paying managers anywhere from $100,000 to $150,000 a year along with bonuses for meeting store goals.

Starting Jan. 1, all nationwide company employees can become eligible to receive at least 24 hours of paid sick time per calendar year after 90 days of employment, the company said.

Onyett said the new policy resembles a sick time policy already in place in California. However, this benefit has now been extended to all part time, or full time company employees nationwide. Taco Bell could not provide an exact number of company employees. However, the brand said 10% of the chain’s nearly 7,000 restaurants are company owned.

On Thursday, Taco Bell outlined three other 2020 commitments including: making all consumer-facing packaging worldwide recyclable, compostable or reusable, and add recycling and/or composting bins in all restaurants where infrastructure permits by 2025; increase Live Más Scholarships, educational funds given to fans and employees, from $4 million to $6 million; and strive to be the No. 1 QSR brand for vegetarian options.

On the green initiatives, Missy Schaaphok, manager of global nutrition & sustainability, said the company will achieve these goals by “collaborating with suppliers, franchisees, industry partners and local markets around the globe to test eco-friendly packaging, remove unnecessary chemicals and meet local regulations all while ensuring we are providing the best consumer experience.”

Mark King, named CEO of Taco Bell last year, said the initiatives reflect the brand’s drive to have a positive impact as the chain expands its footprint around the world.

“Our business growth in the last decade has positioned us to create change for good and implement creative solutions for our planet, our people and our food,” King said in a statement.