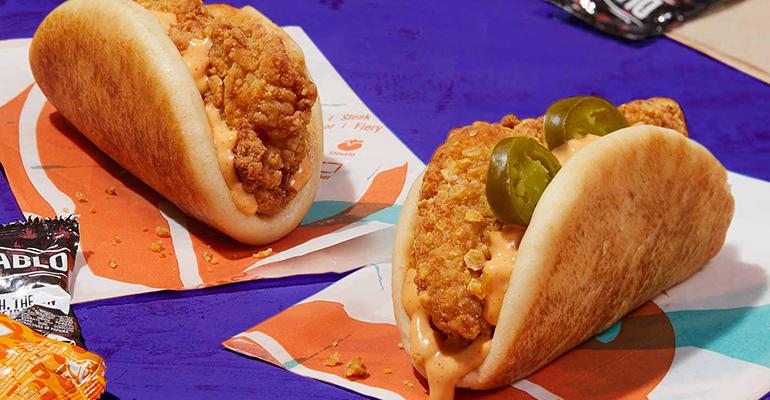 Taco Bell has enlisted two (real) college debate teams to argue out whether its new Crispy Chicken Sandwich Taco is a sandwich or a taco.
News>Quick Service

Real debate teams will battle out whether the new dish is a sandwich or a taco. Which side are you on?

Taco Bell is planning the national roll out the long-awaited Crispy Chicken Sandwich Taco on Sept. 2, and the quick-service chain is angling for a fight — or at least a vigorous civil debate.

News earlier this year that the Irvine, Calif.-based chain was testing a chicken sandwich taco prompted headlines about Taco Bell’s entry into the “chicken wars.”

But for the millions who clearly are looking for a distraction from real news headlines, it also raised an important question: Is it a sandwich? Or is it a taco?

Taco Bell has enlisted two (real) college debate teams to argue it out. Teams from the University of Georgia and Clemson University on Sept. 4 will take on “The Great Crispy Chicken Sandwich Taco Debate” during the Georgia v. Clemson primetime football game on ABC via 60- and 30-second ad spots.

“Our new crispy chicken innovation is far from the average chicken sandwich, and we’re certain it will get a spicy reaction from sandwich and taco fans alike,” said Liz Matthews, Taco Bell’s global chief food innovation officer, in a statement. “Even the masterminds from our test kitchen couldn’t decide if it was more taco or sandwich, which is why we’re excited to bring in the debate team experts to have some fun.”

The dish involves all-white-meat fried chicken that has been marinated in jalapeno buttermilk, seasoned with Mexican spices and rolled in a crunchy tortilla chip coating. It’s served on a warm soft flatbread, shaped in “iconic taco form” and flavored with Taco Bell’s signature creamy chipotle sauce. It comes in regular and a more spicy version with jalapeno slices.

For Taco Bell, crispy chicken is hardly a new ingredient.

For the new version, those on “Team Sandwich” will likely argue the shell is bread, not a tortilla, which is true. In fact, the shell more closely resembles Navajo fry bread or even naan from India — but those are not examples of bread used in sandwiches.

Those on “Team Taco” contend it’s all in the fold of the shell, proving it’s a taco. And yet, no one would argue that a calzone is a taco.

Clearly both sides are wrong.

The sandwich/taco is priced at a recommended $2.49 a la carte; or two for $4.49; or in a Crispy Chicken Sandwich Taco Box for $5.49, which includes a Beefy 5-Layer Burrito, a Crunchy Taco and a medium fountain drink.

Taco Bell Rewards members who can’t wait until Sept. 2 can get an early taste at participating locations on Aug. 30 during Happier Hour on the Taco Bell app.