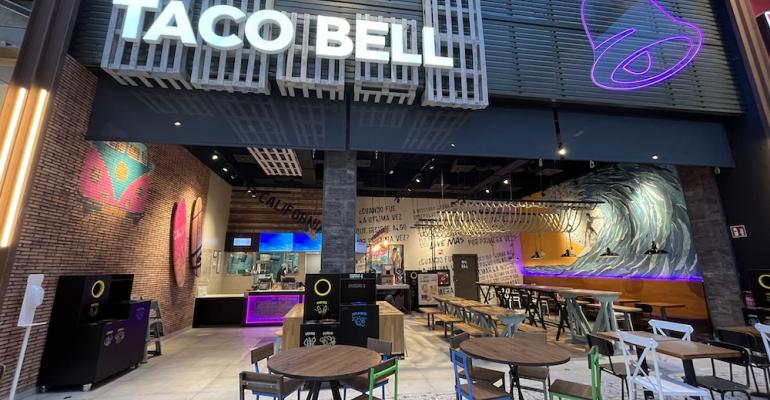 Taco Bell sets sights on reaching 1,000 units outside the U.S.

Betting that the world will appreciate “a taco in a burger world,” Taco Bell is accelerating international growth with a push to reach 1,000 units outside the U.S.

Reporting fourth quarter earnings last week, David Gibbs, CEO of Taco Bell-parent Yum Brands Inc., said the company broke records last week with the gross opening of about 4,200 restaurants globally, ending the year with 53,000 units across its four brands. That new-unit growth came mostly from sister brands KFC and Pizza Hut, which have long been developing their reach outside the U.S. In fact, about 60% of Yum’s sales come from international locations.

As a member of the Yum portfolio, Taco Bell’s strength has come from domestic growth over the past few years. But now Taco Bell is standing out for its success with international locations. The Irvine, Calif.-based chain ended the year with 7,791 units, of which 789 were international — and that growth outside the U.S. is a 25% increase from the roughly 600 international units at the beginning of 2021.

In Spain, for example, Taco Bell’s largest international market, the brand crossed the 100-unit threshold in December, and this year both the United Kingdom and India are expected to reach that milestone, said Julie Felss Masino, president of Taco Bell International.

“We’ve built 25% of our estate in the last two years, all during the pandemic,” said Masino in an interview with Nation’s Restaurant News.

That growth includes moves into new markets, like Malaysia, where there are now five Taco Bells, and Indonesia, where there are four. Masino said growth is also being seen in Guatemala, one of Taco Bell’s oldest markets, and in regions like China, where KFC and Pizza Hut have been embraced.

In New Zealand, Yum acquired the marketing tech company Tictuk, which is being tested as the chain’s ecommerce platform there, and in the U.K., digital marketing is moving to a next level, Masino said.

“They’ve done a really good job of making the brand distinctive, and the focus on their team and the consumer and being digital first is a big part of their success,” said Masino. “The very first store manager of the very first store in Spain is now the regional director leading 50 stores. The story is about growth in Spain is actually a story of people growth.”

But different markets require different strategies, she said. India is a master franchise partnership like Spain, for example, but the U.K. is being developed by multiple franchise operators, who opened 34 stores in 2021 alone, she said.

“We’re confident in what the future holds for Taco Bell International, particularly as scale ties directly to profitability,” he said.

Masino said similar global campaigns are coming this year, though she declined to reveal details.

“We are very, very focused on driving and achieving big milestones of international growth and taking our delicious, craveable taco and our distinctive brand to all of our fans around the world,” she said.